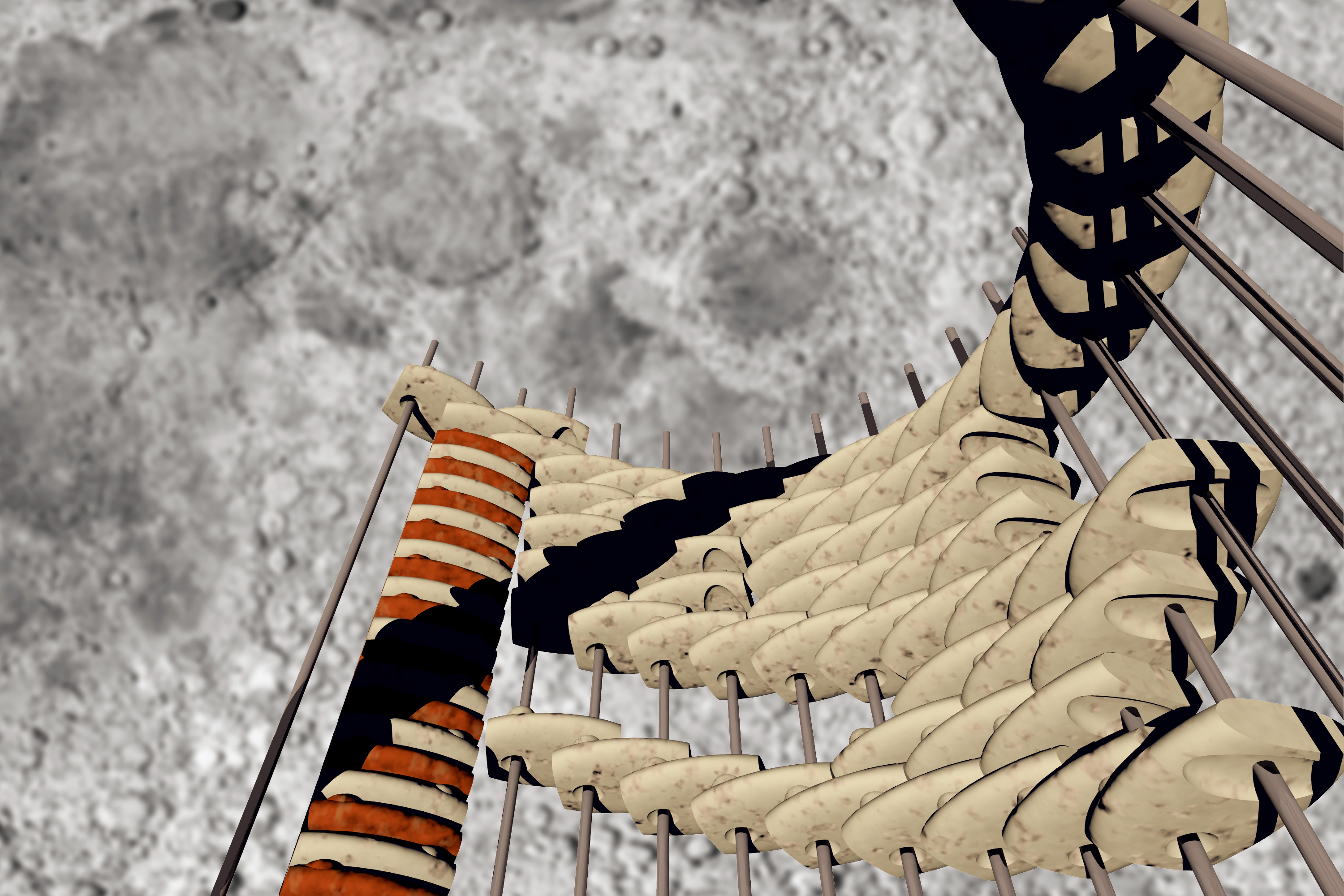 In 2002, while a graduate student, I determined  to develop a deliberately peculiar or even surreal alternative to the traditional concrete masonry unit, which could only be used to produce structures that were distinctly unlike the normative result of CMU masonry. One of my fellow students described the resulting concrete unit as a “Moonbaby.”

Each individual unit would be handed (i.e., “left-handed” or “right-handed”; a left-handed version would be a mirror-image of a right-handed version). Ultimately, I worked out a system where alternating left- and right-handed  versions of the CMU could only be stacked in a column-form, but where an assembly of multiple CMUs of the same “hand” would result in a spiraling helix ten feet in diameter.

For ease of testing, I settled on milling molds for the CMU’s from slabs of polystyrene rigid insulation. Unfortunately, although inexpensive and quick to mill, a mold would rarely survive the exothermic reaction of the curing concrete, which limited the number of example units I could create in the time available to me. The last version of the CMU design included holes for size 8 reinforcing rods (or the equivalent diameter in terms of threaded rod). For ease of assembly, and frankly to add yet more visual interest to anything built with the system, I decided that the left-handed CMUs should be cast using concrete strongly tinted with mason’s dyes. 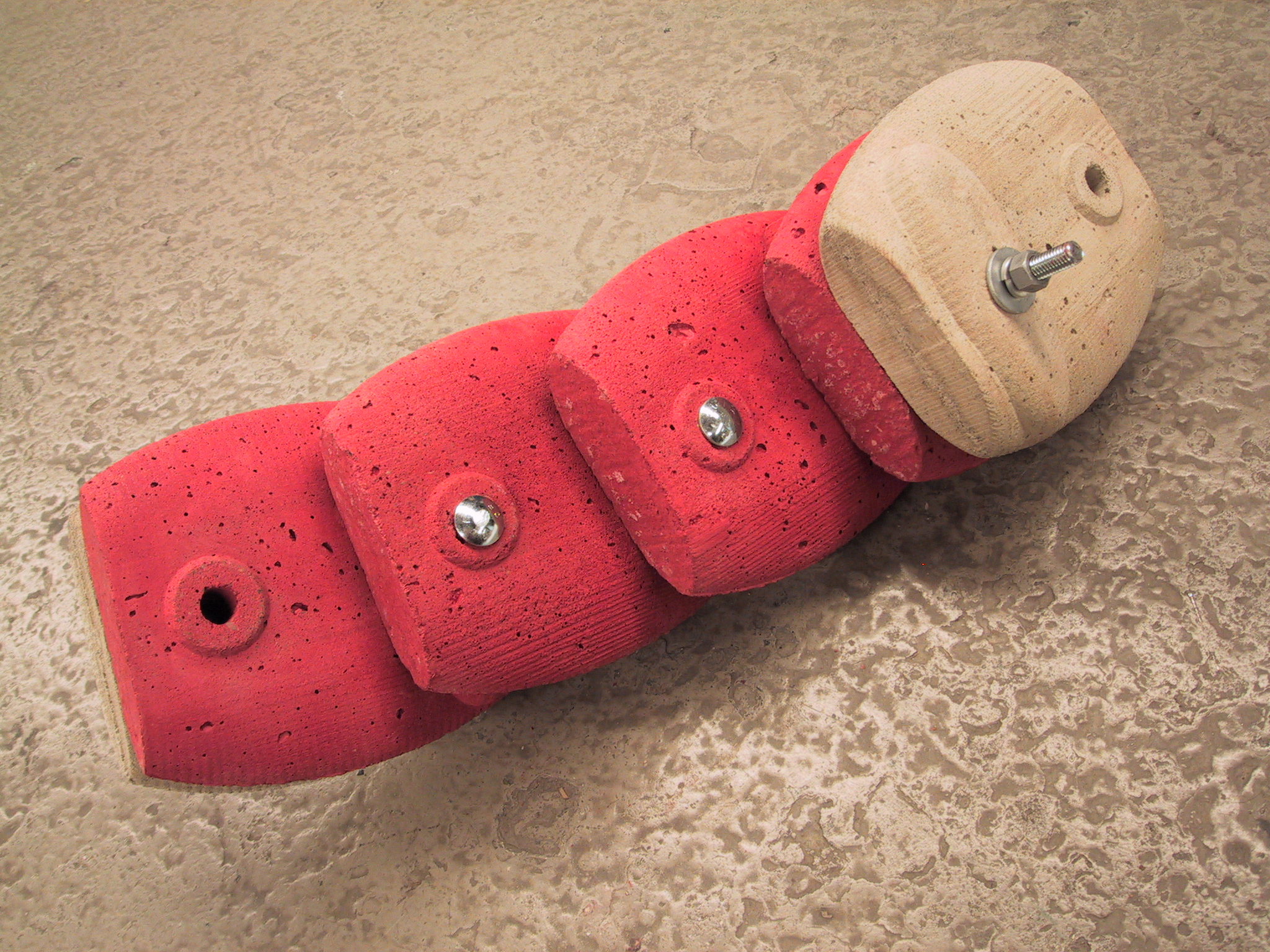 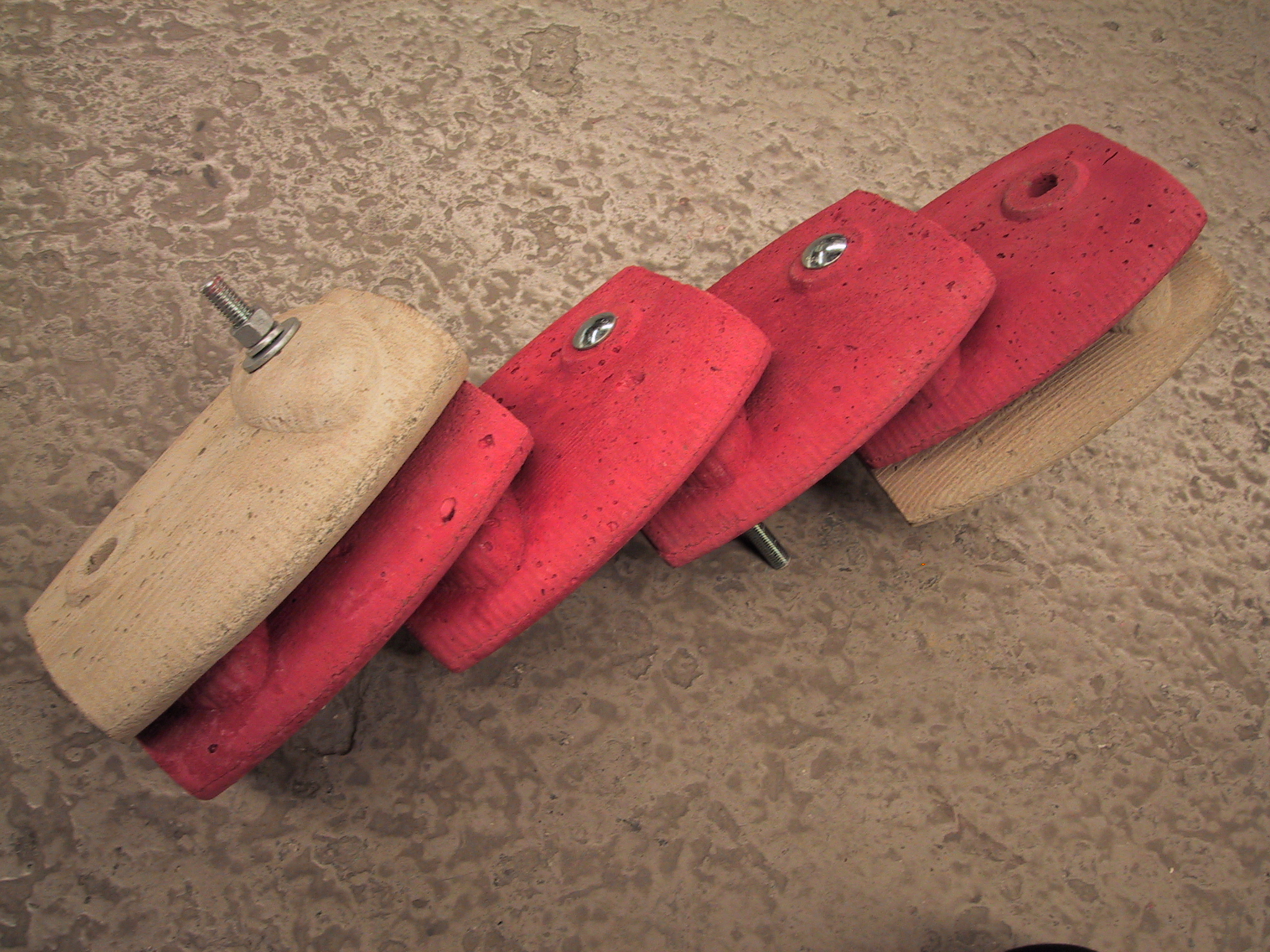 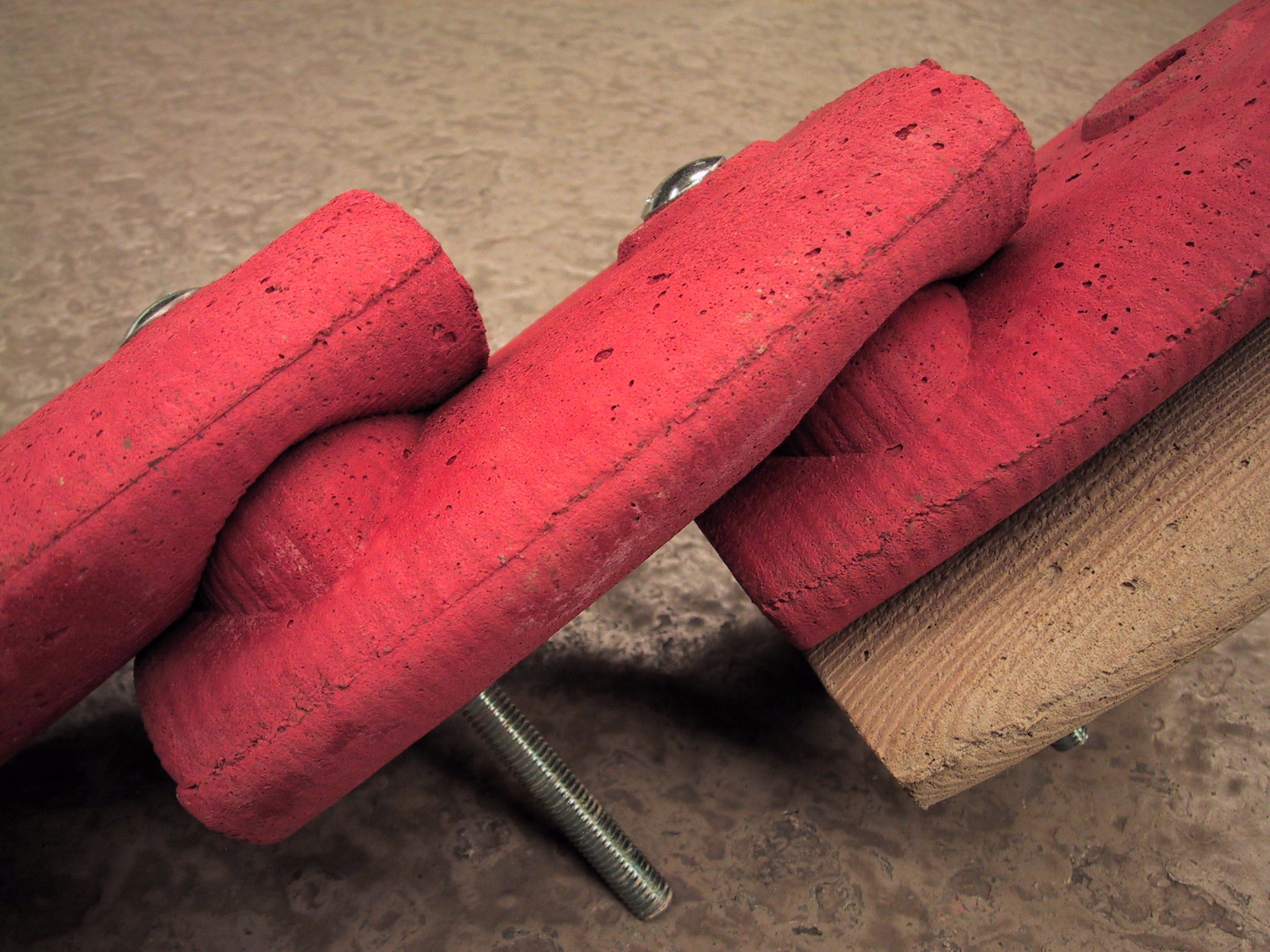 I produced enough molds and example CMUs to demonstrate the basic assembly provisions, and then resorted to computer renderings to illustrate what one might accomplish with a few hundred of the things. 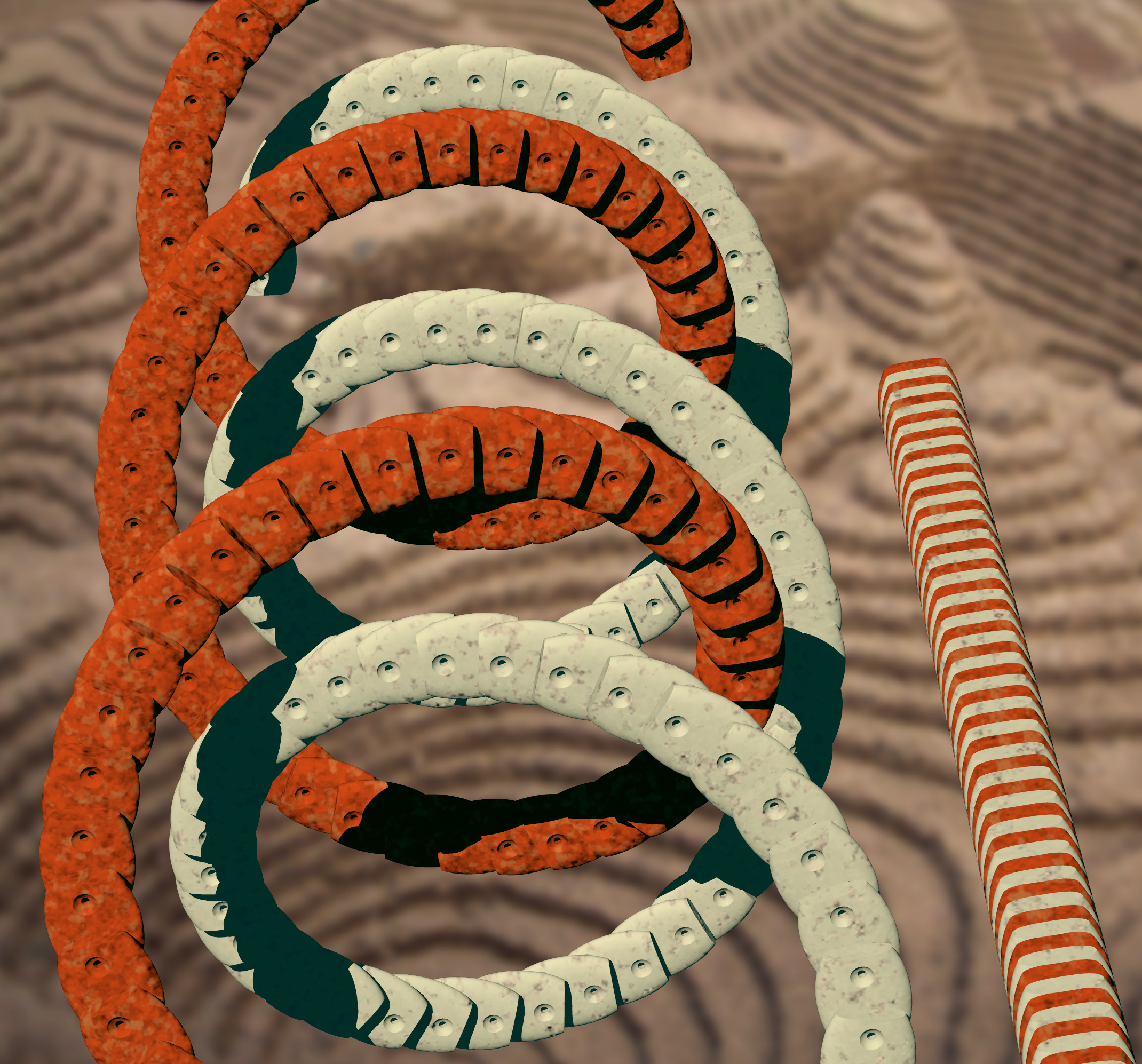 And then nothing else happened, in terms of development for this product. My studies took me to other topics, and I never had the time (while I had access to the CNC milling equipment of the university) to create a mold that would reliably permit mass production and mass-testing. I did learn, during the course of bolting together my samples, that units strongly tinted with the mason’s dyes tended to have considerably lower compressive strength than the untinted versions…almost none of the red “lefty moonbabies” survive in my remaining collection.

However, the vaguely-anthropomorphic individual CMUs proved so popular with my fellow graduate students that a half-dozen actually commissioned sets to use as bookends. One student even requested a set of a “pocket-sized” version — each unit only three inches long — to send to her young nephews presumably to use as building toys.