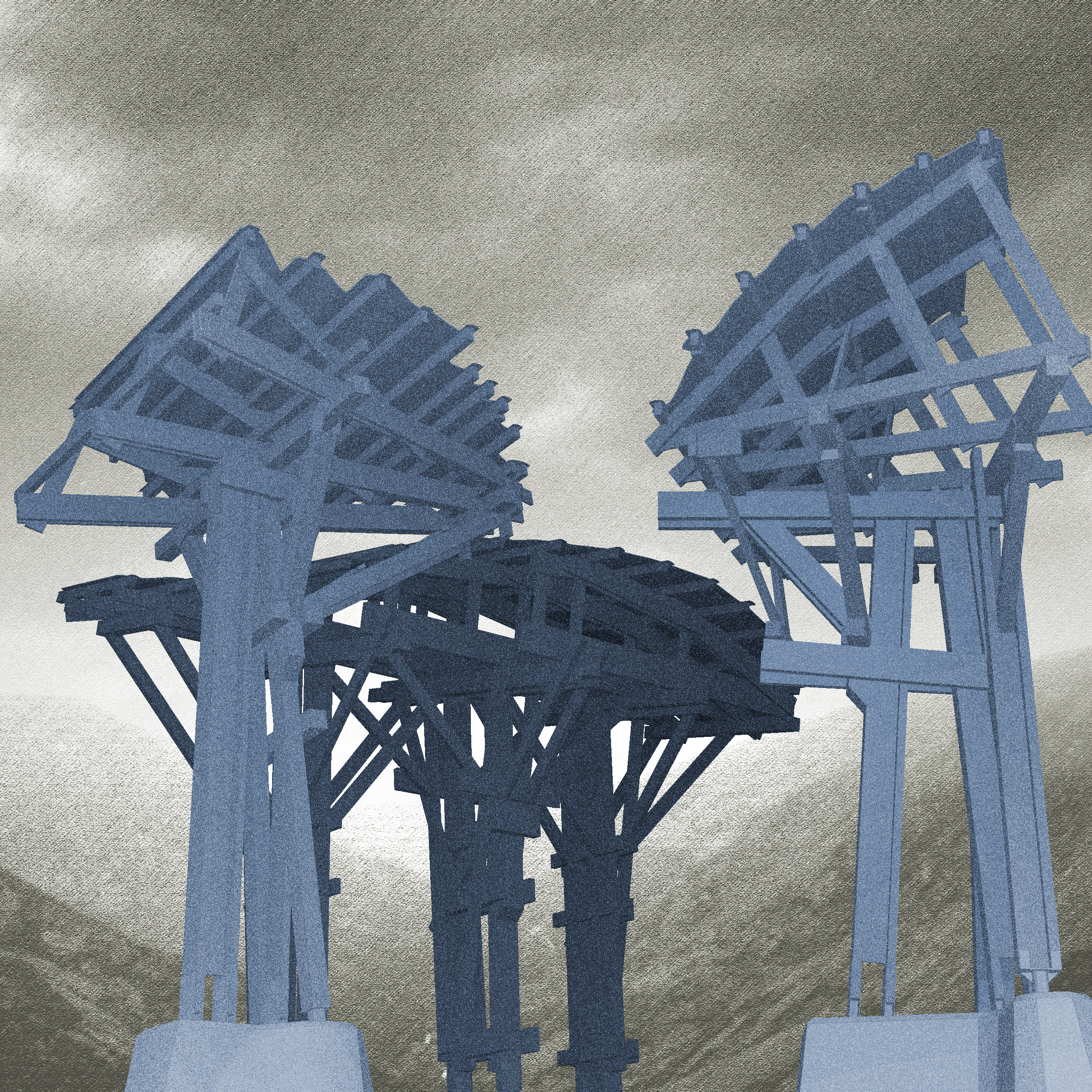 Fresh off of the award ceremony for my fantasy project “Stormhouse” and enthused at the prospect of being considered “an experimental architect”, I began to develop a successor piece of fantasy combining architecture and landscape design. It was inspired by an actual if oddly-trivial nineteenth-century monument at an artesian well in Glen Mark, northern Angus, Eastern Scotland.

As with the Stormhouse and earlier Pavilion for Oblivion projects, this future project would be accompanied by a narrative:

Eventually, it occurred to me that so much had been taken away from me that I soon would no longer have anything left at all worth the taking. With this gloomy prospect in mind, I decided that I had no reason not sign on to a particular project that, in happier, more complete times, might have struck me as potentially, ultimately fatal, on both professional and personal levels.

In a lonely, out-of-the-way valley in a cold northern country (I’ll allow you to figure out which one), there was a natural spring or well that, for time out of mind, had always been marked with some kind of monument.  I suspect that originally this was one of the those “holy wells” that in the old countries were originally the seat of some local aquatic deity, and that later became the special charge of some dubiously-martyred hermit or holy man whose name fell off the list of recognized saints centuries ago, assuming that anyone had bothered with a hagiography for such an obscure if pious personage in the first place.  More recently, the spring or well had been commemorated for quenching the thirst of a well-known and deeply-loved monarch, who had paused there en route to some more important place.  (I actually find this as unlikely as the notion of a forgotten saint — why in the world would such an important ruler have been passing through this nowhere?)  The royal refreshment was recalled to all and sundry by a remarkable stone structure consisting of six muscular Gothic half-arches or buttresses that supported a small stone cross over the midpoint of the tiny Artesian-filled basin, the whole suggesting from any distant vantage a child’s idea of a medieval crown for a giant.

But a century of icy winters and the constant rubbing against the stonework of passing sheep (which were occasionally herded through the valley in more temperate periods) eventually upset the balance and sent the rusticated granite voussoirs into the water, leaving the once-memorable site an uninspiring patch of hoof-churned mud pocked with rubble. 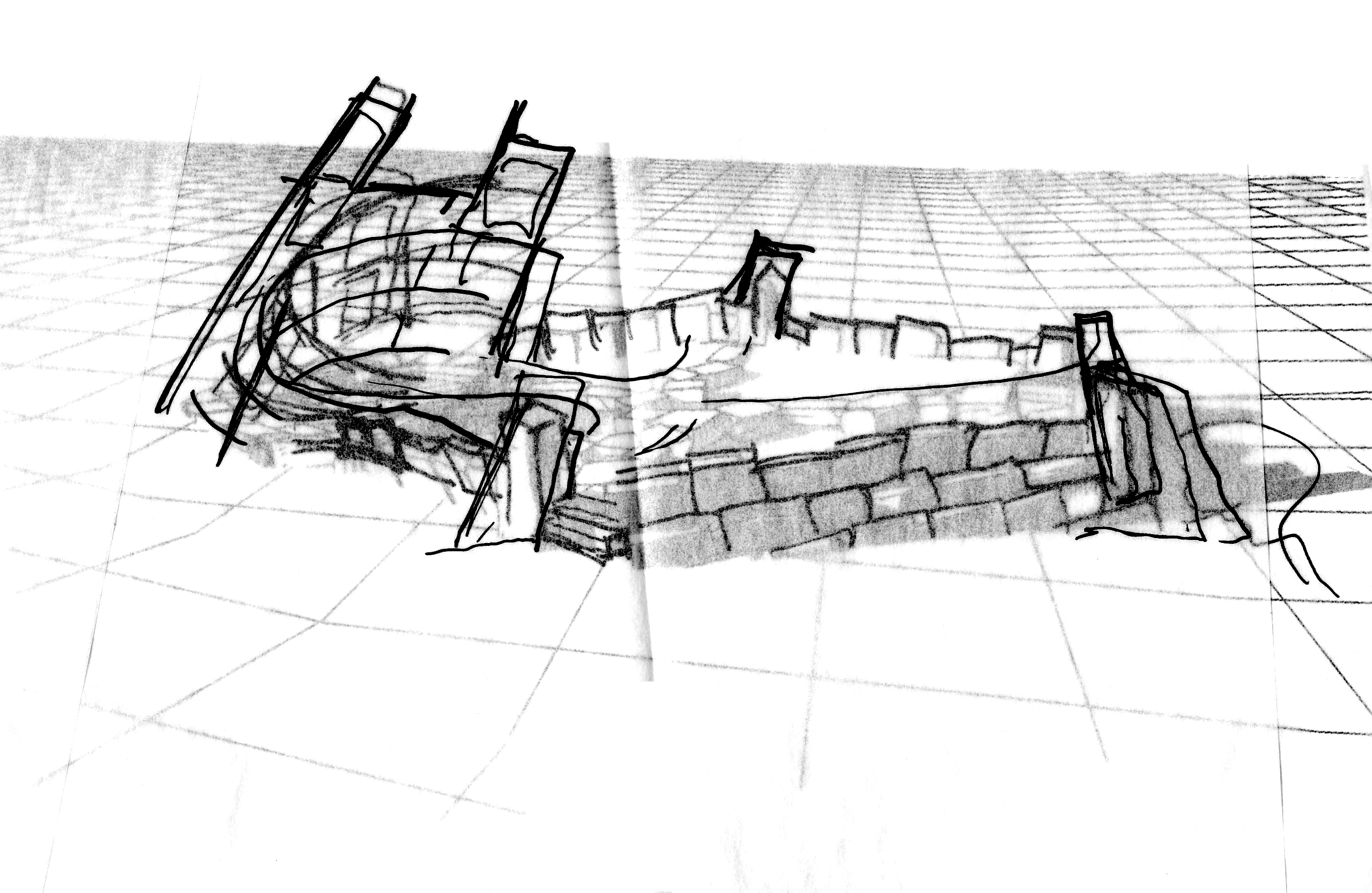 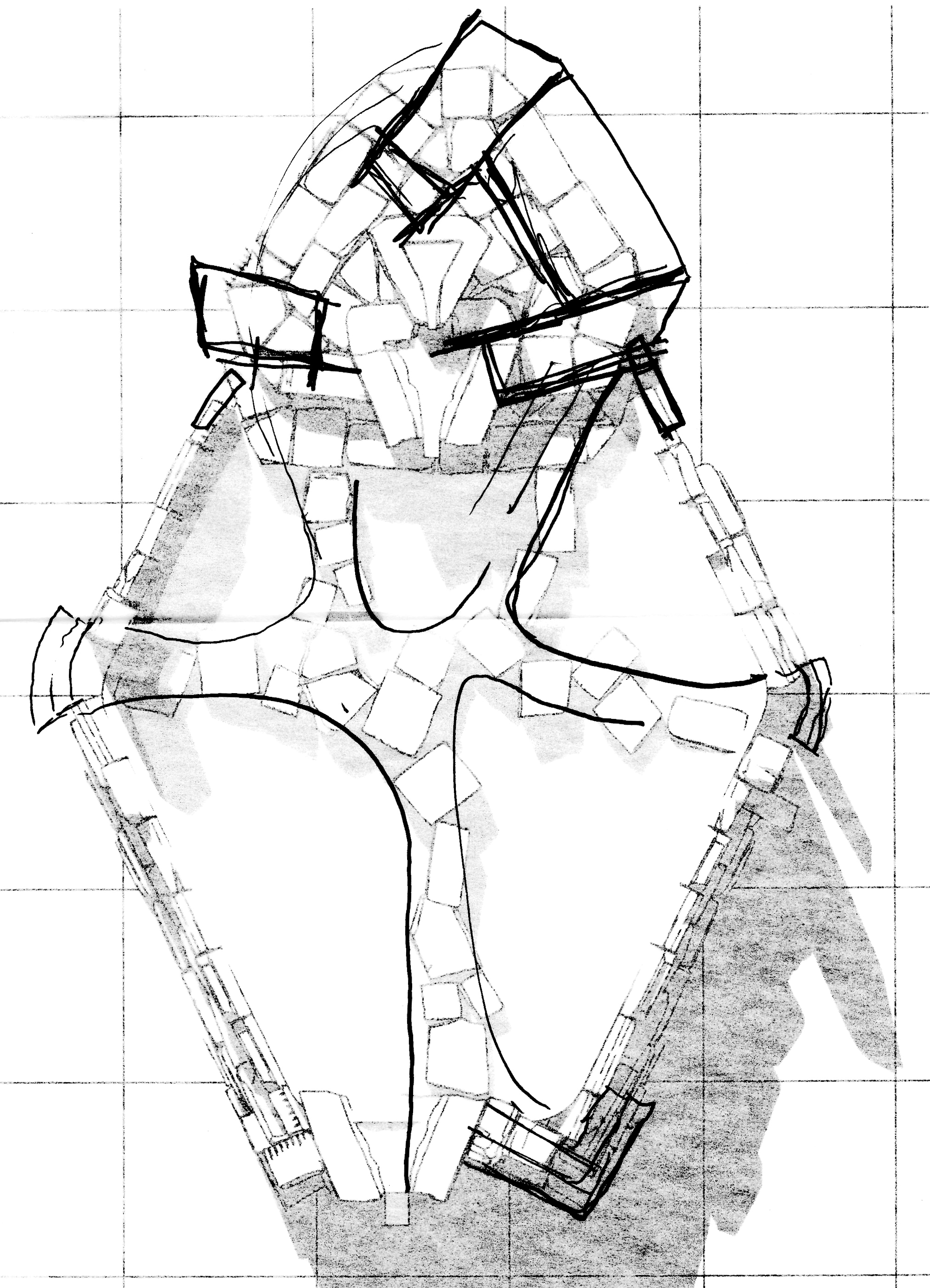 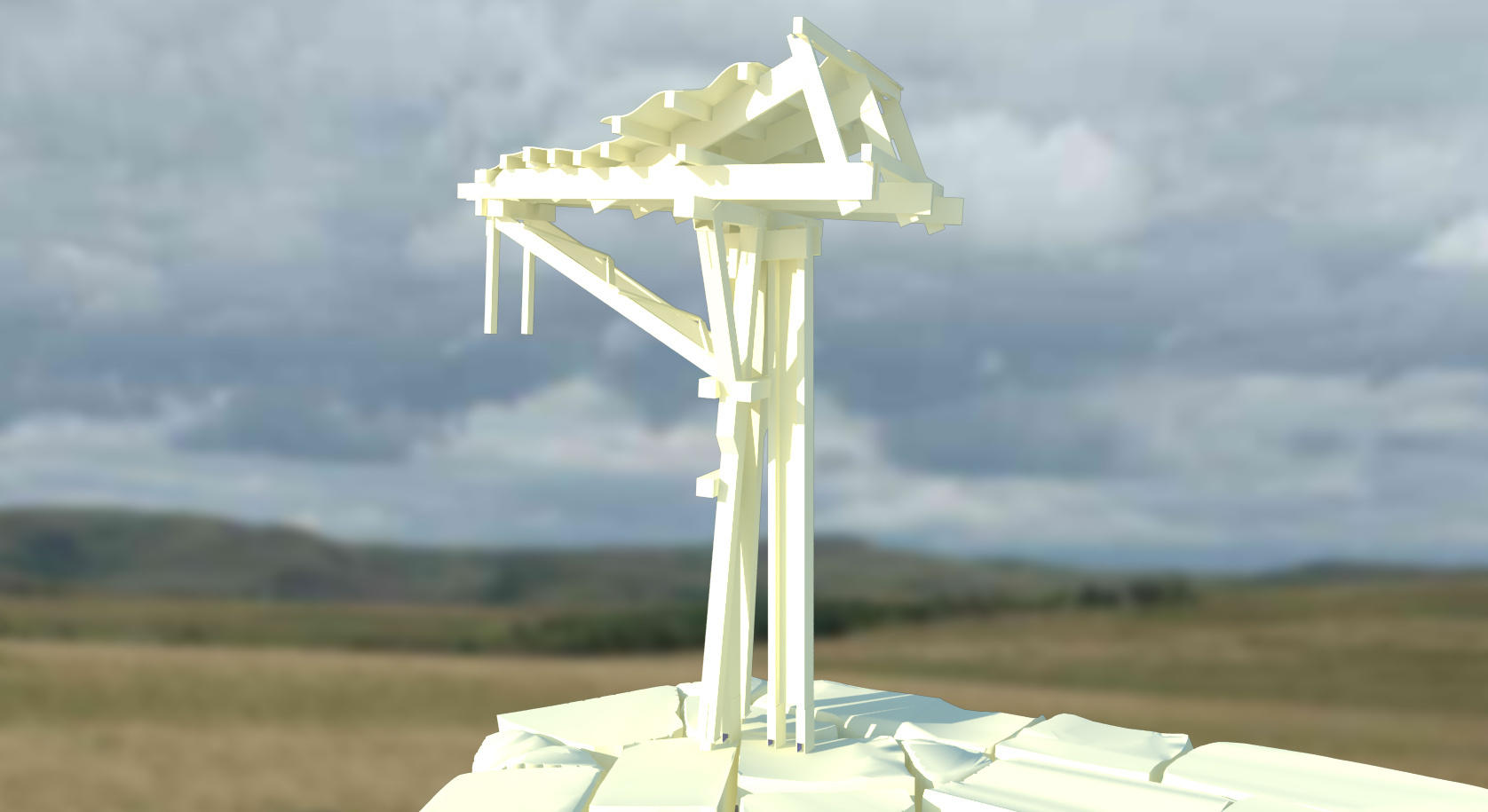 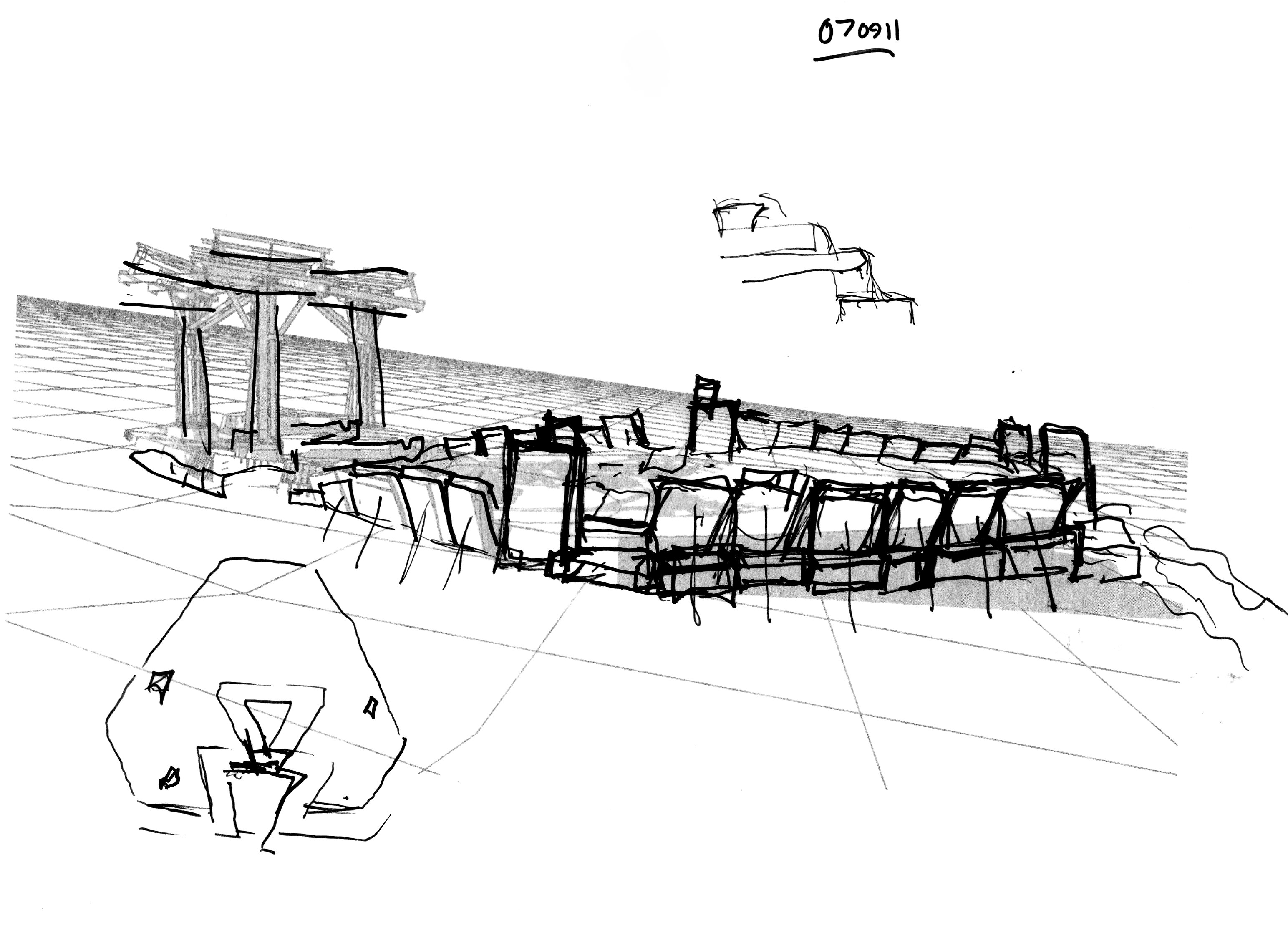 I was of course tasked with restoring the natural order of things by creating some sort of memorable structure there.  But the commission included some rather unusual provisions that no doubt would have put off a more optimistic and complete designer.  And no, I don’t mean anything as prosaic as the requirement for a built artifact that was inherently proof against woolly herd mammals and frost heaves. 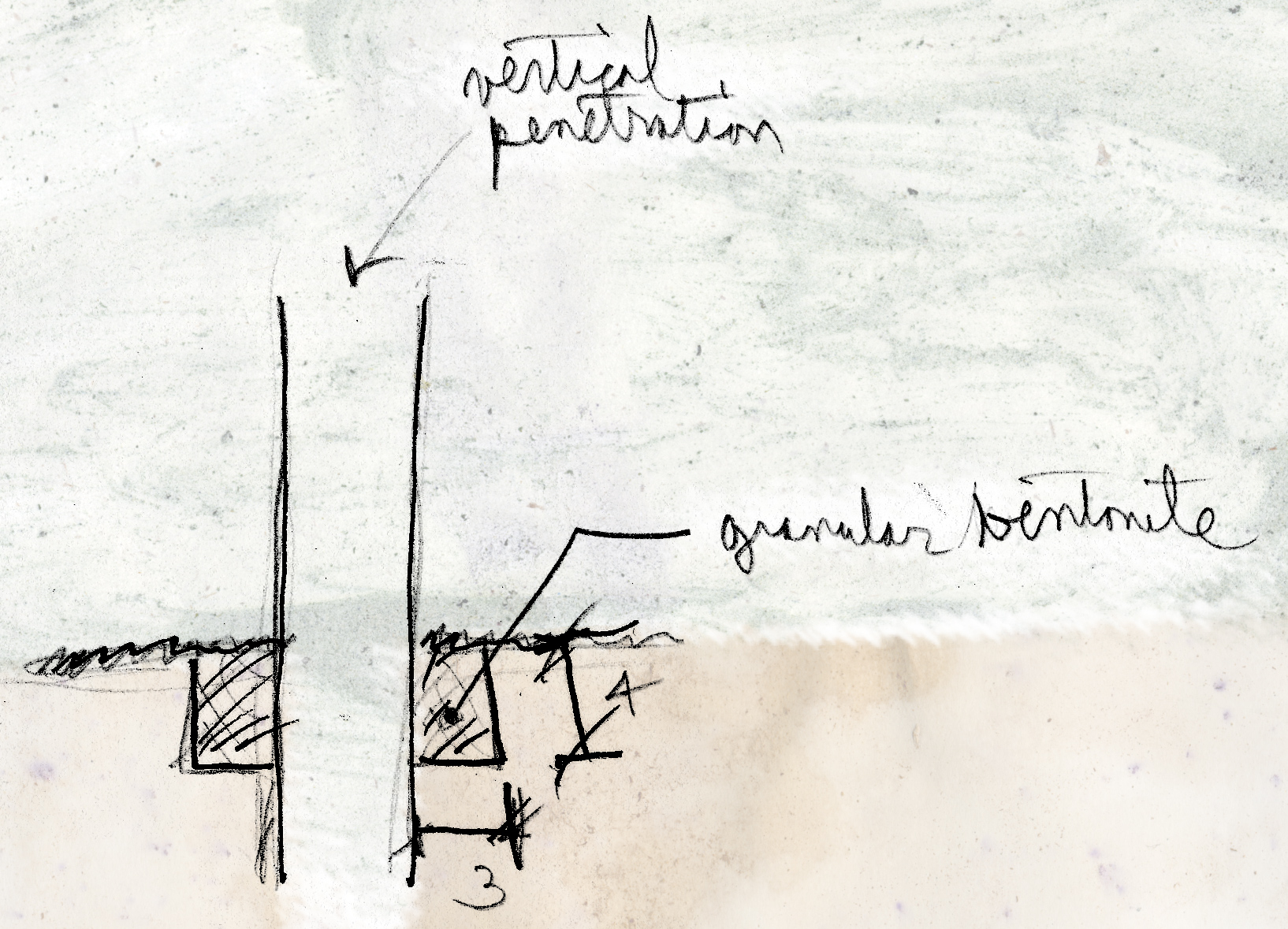 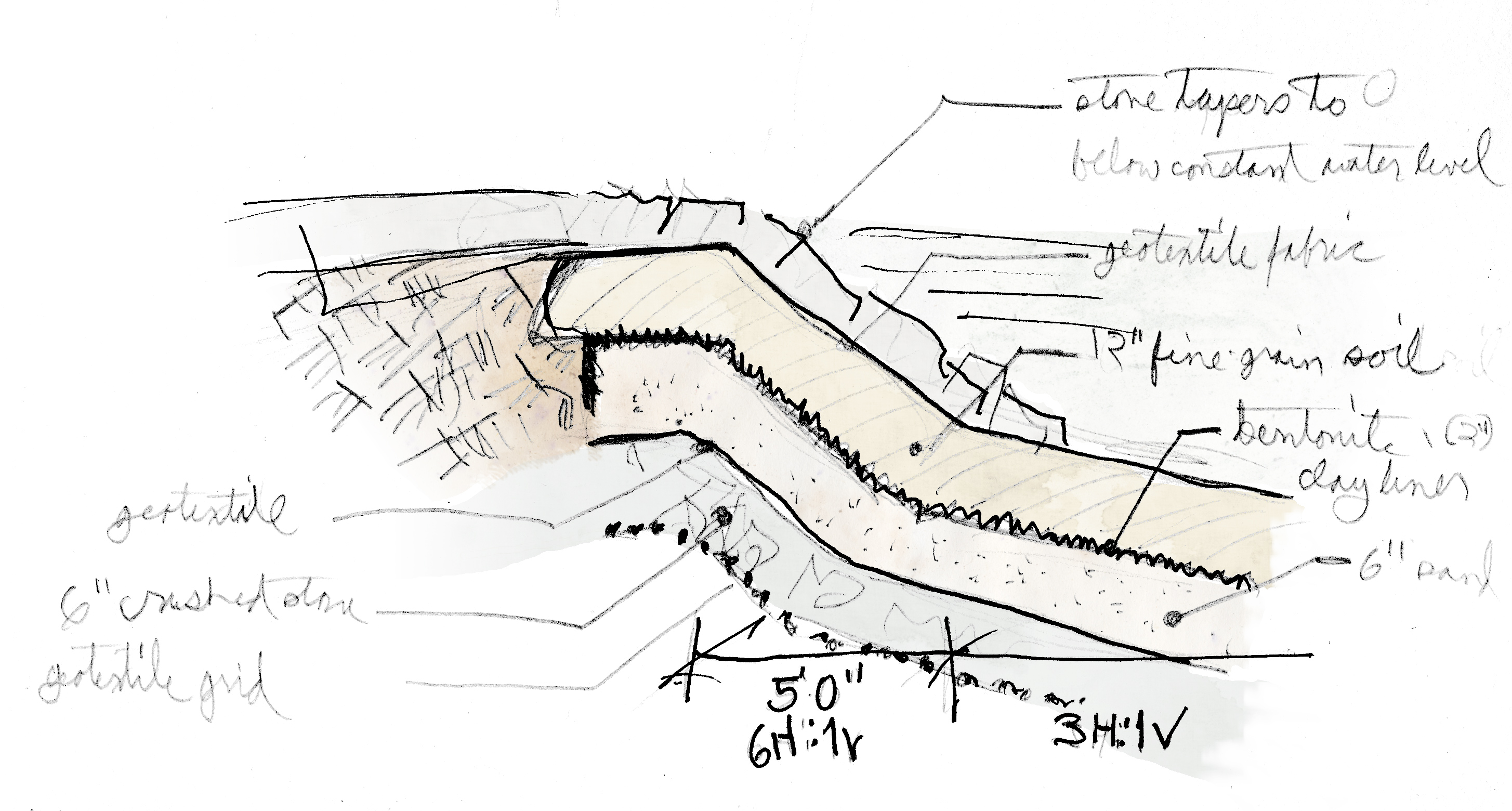 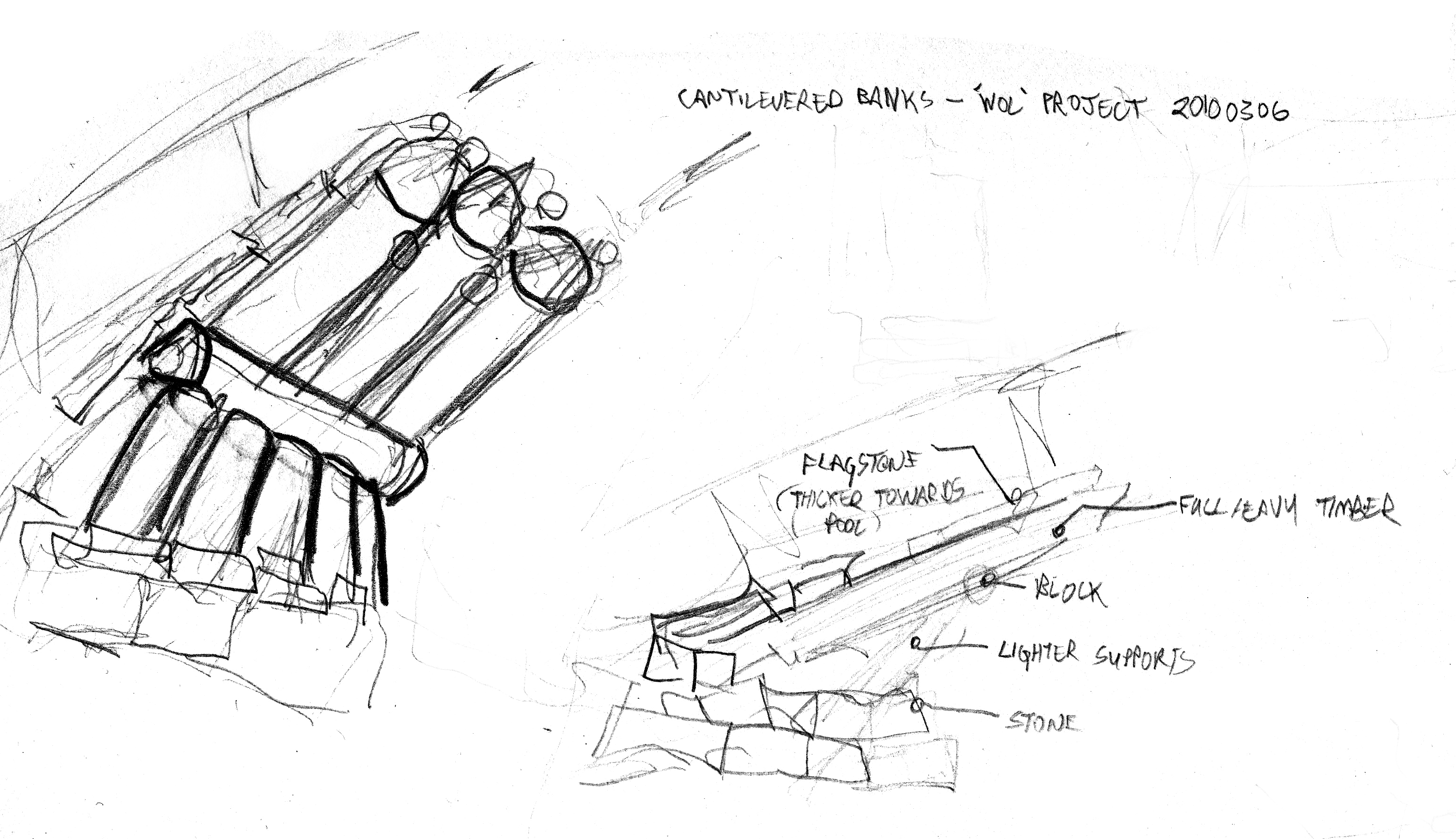 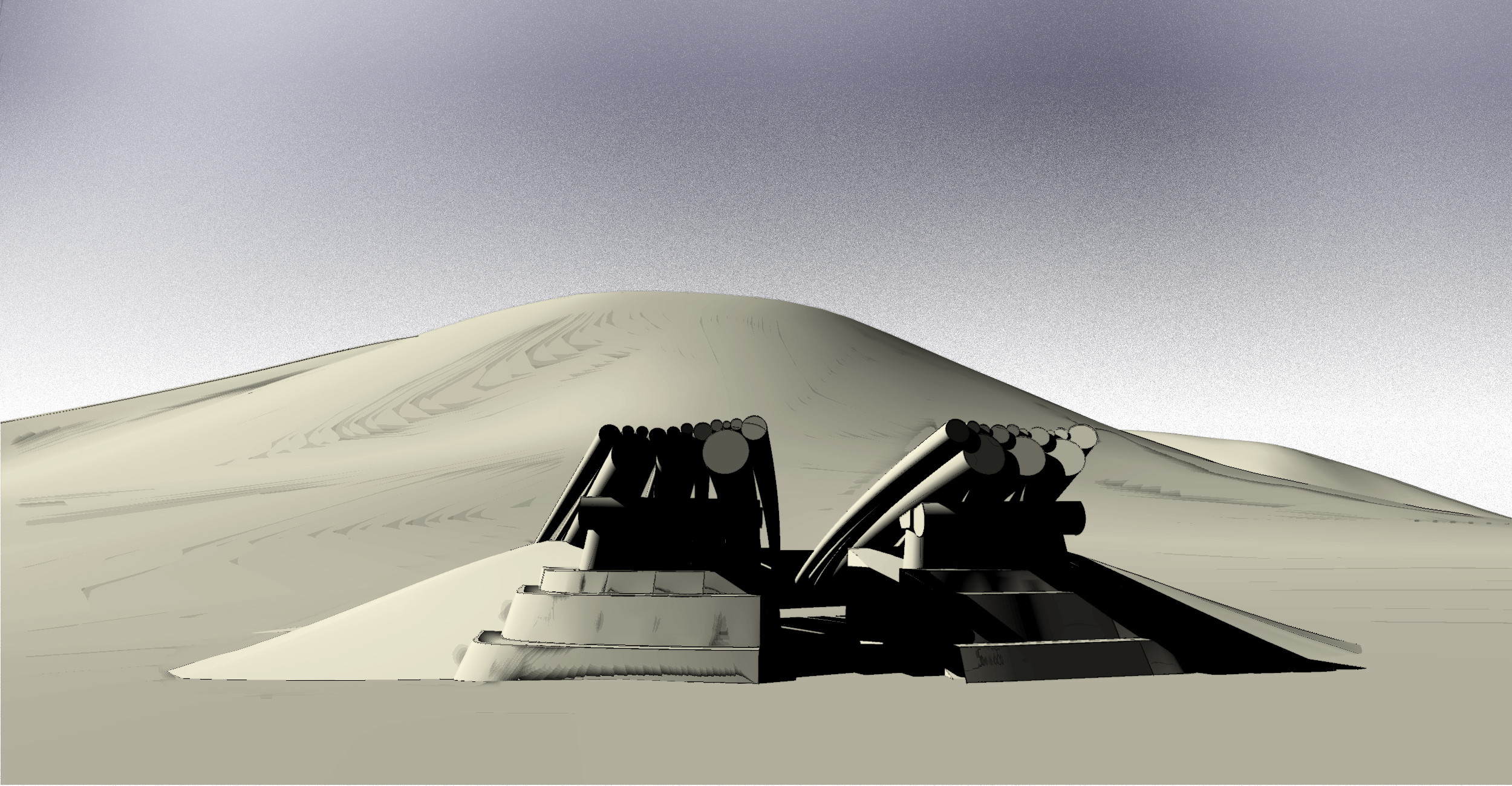 No, the idea was to conflate the monument scheme with the (probable) earlier program of a hermitage, and further to specify that the designer was to remain habituated with the designed, as a sort of caretaker or even “ameliorator.”  Since time would inevitably take it toll on whatever monument was placed at the well, the designer was even encouraged to produce something that would require replacement or updating at regular intervals, as opposed to something (like the monument to the thirsty ruler that it replaced) presumably built for the ages but in fact likely to come down at some indeterminate but undoubtedly-awkward moment in the future. 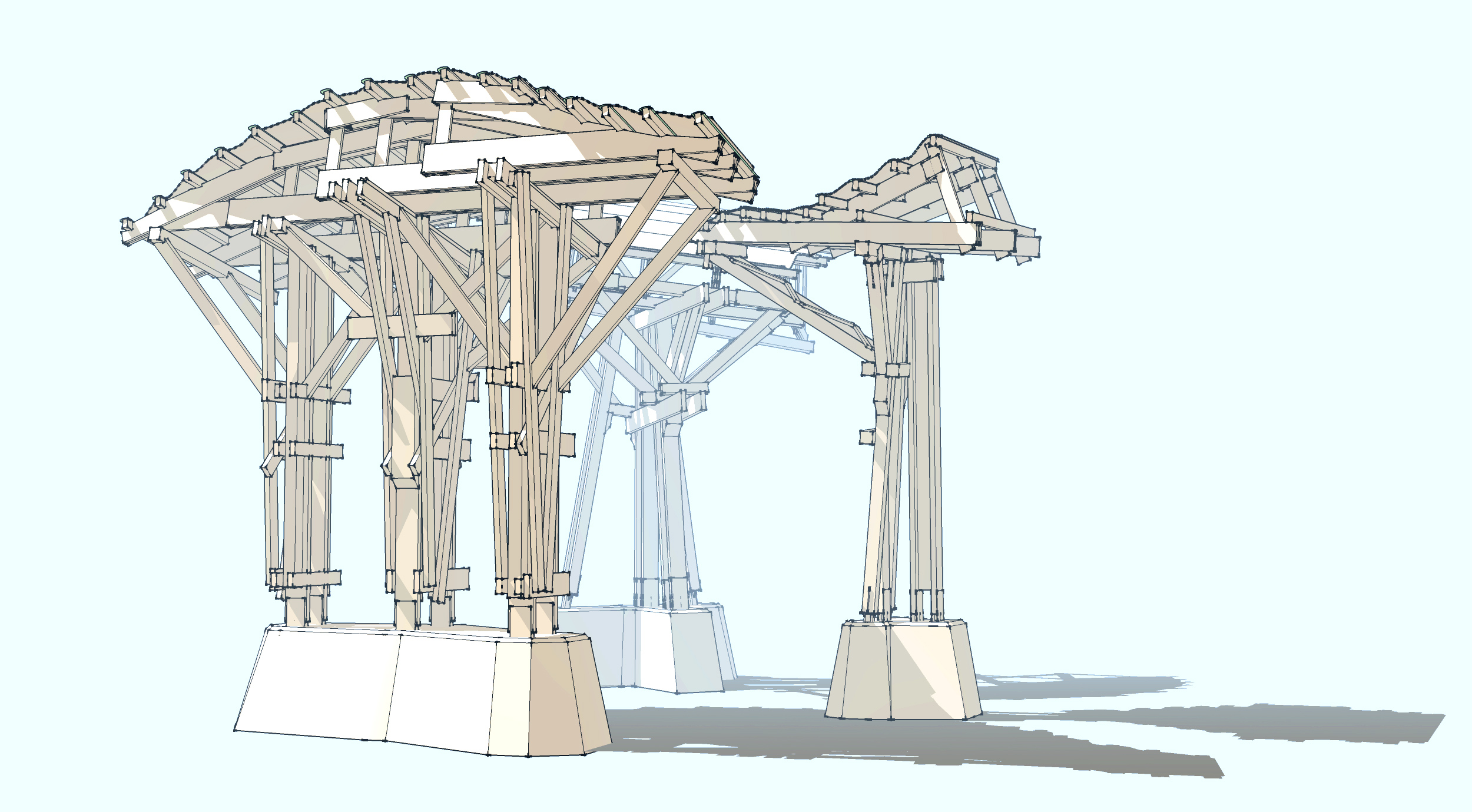 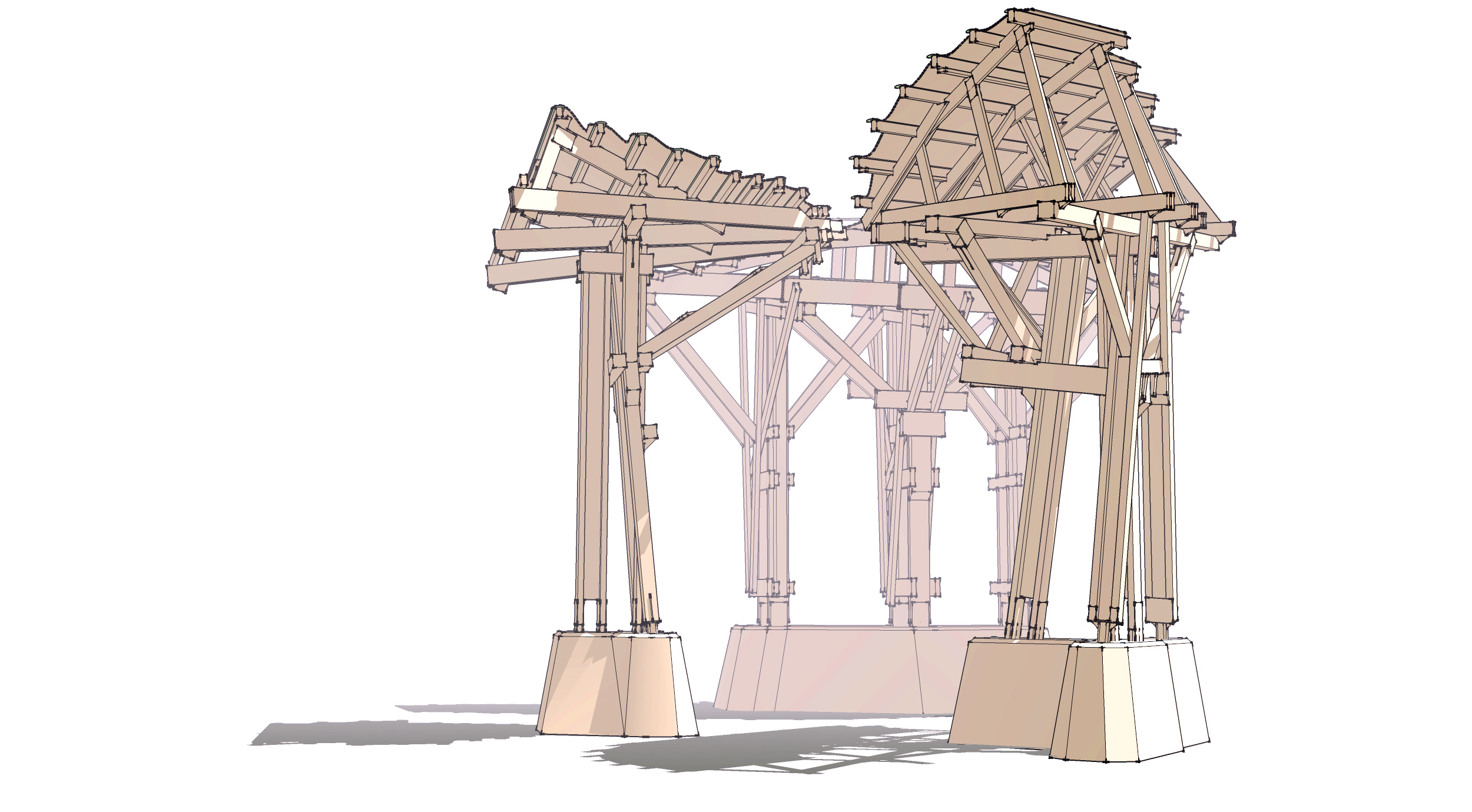 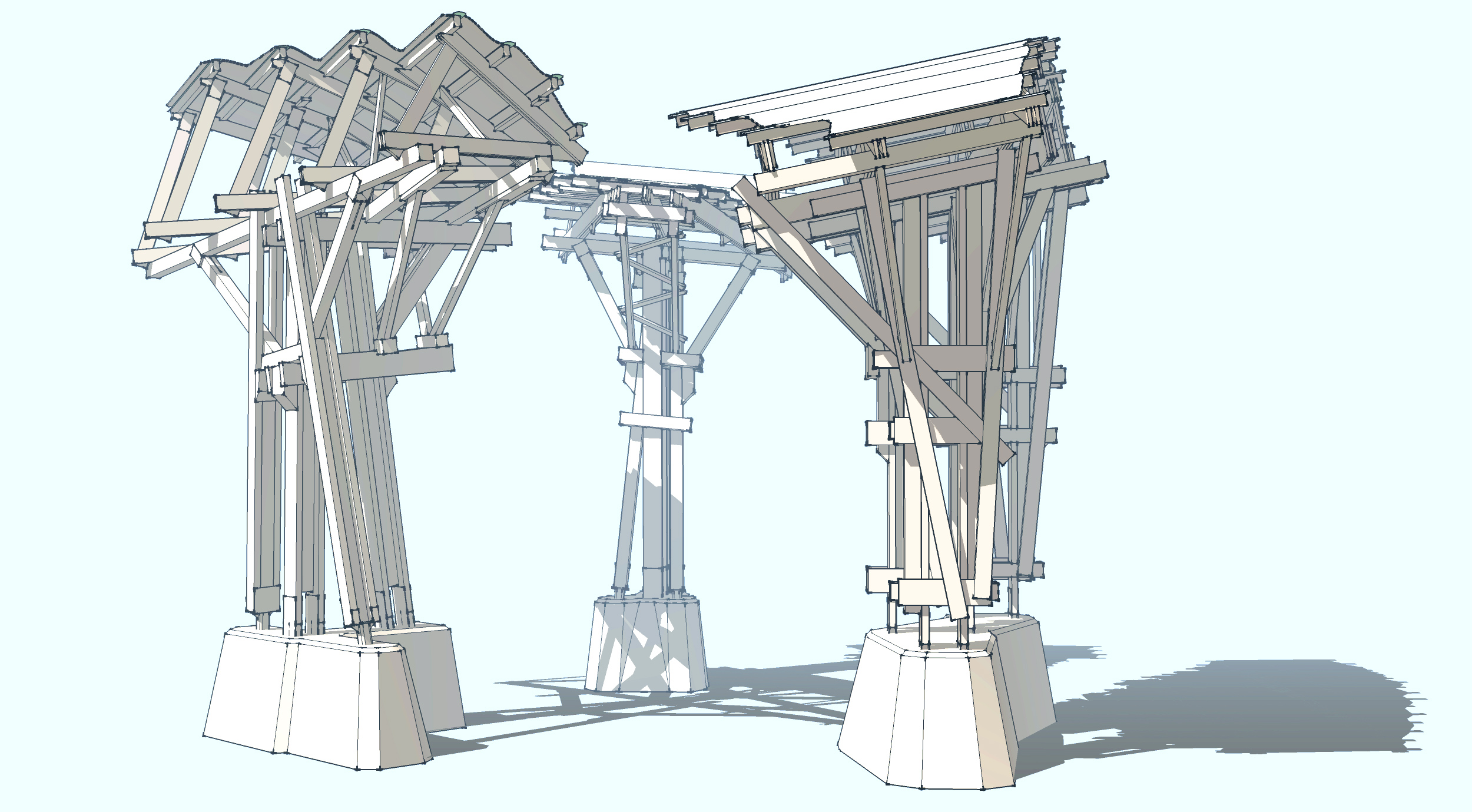 The ongoing maintenance and rebuilding process would require the designer — myself — to commit to living for the rest of my life nearby the monumentalized spring. And therefore some sort of accommodation — a hermitage-studio, of sorts — would be required of the program.  An arrangement would be made to keep me in building materials (and of course, foodstuffs) for the duration of my term.

This (as noted above) was a lonely, out-of-the-way place. In fact, there was no access by road for conventional vehicles, so any provisions (for building and for the designer/builder) would have to be brought up the stony valley by foot, by animal, or (and this seemed to be problematic) some kind of all-terrain tractor…and only during the fleeting warm half of the year, as the granite-toppling frigid climate also inevitably closed the passes for the other half.  It was suggested that some supplies might be delivered by air or somehow parachuted down to me, but I was privately warned that this was so unlikely that I should give up hope on such a delivery route and accustom myself to the notion that I would be largely restricted for my building and my nutrition to what could be delivered at rare intervals on the back of some breathing creature or that more likely could be derived from the immediate and lonely local environment. 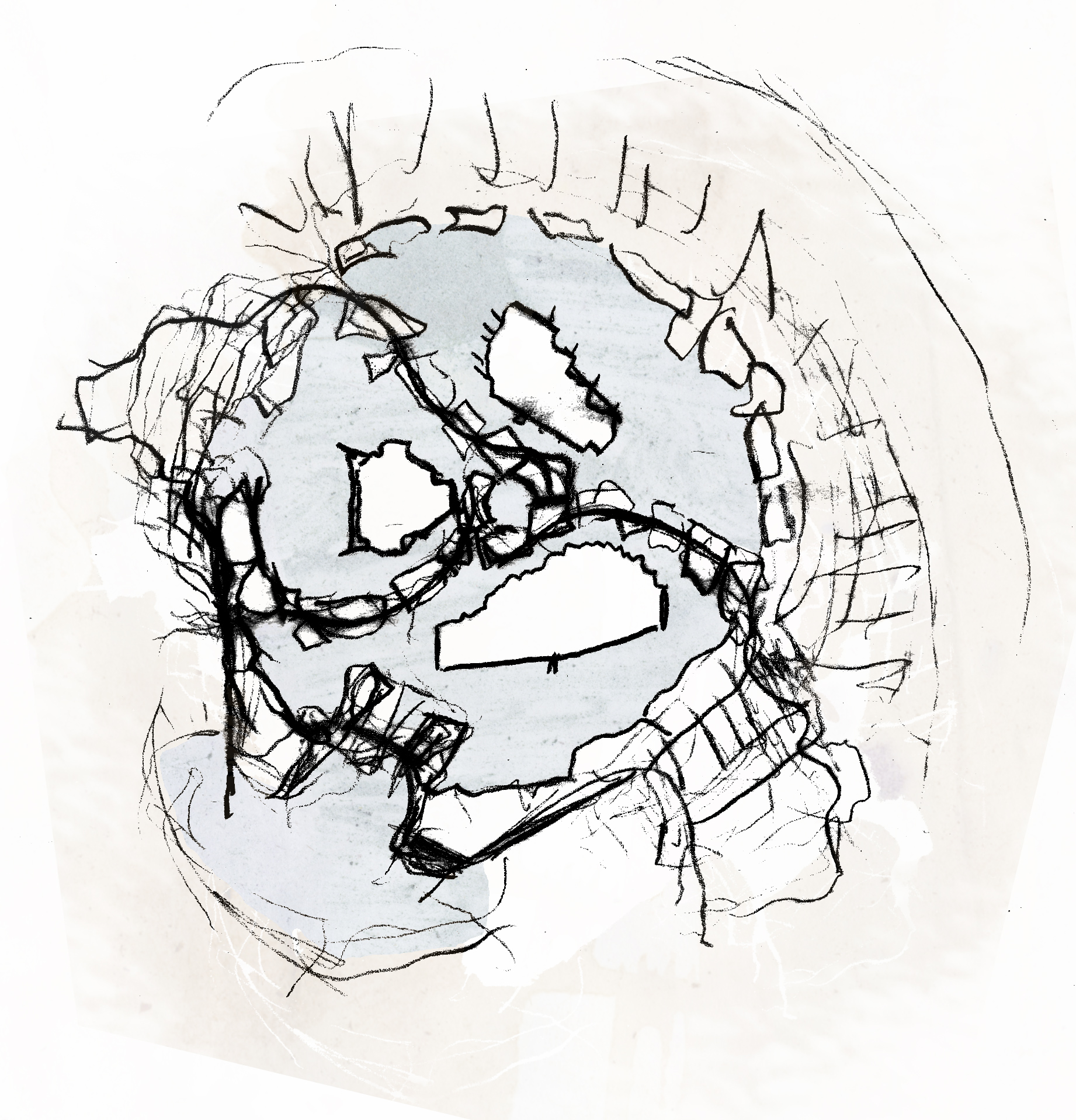 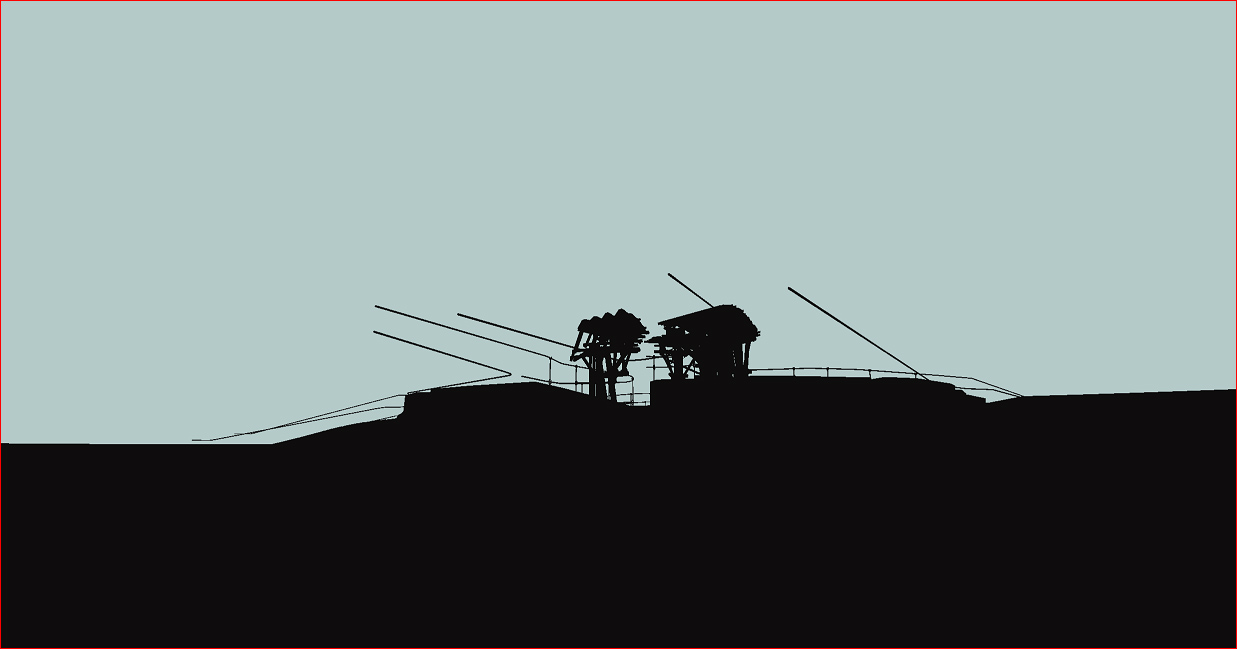 Once again, I should emphasize that I felt I had so little left to lose that this would be the safest place to keep what remained of me, so the outlook did not appreciably look any dimmer than sitting out the remainder of my existence in some less-desolate spot. 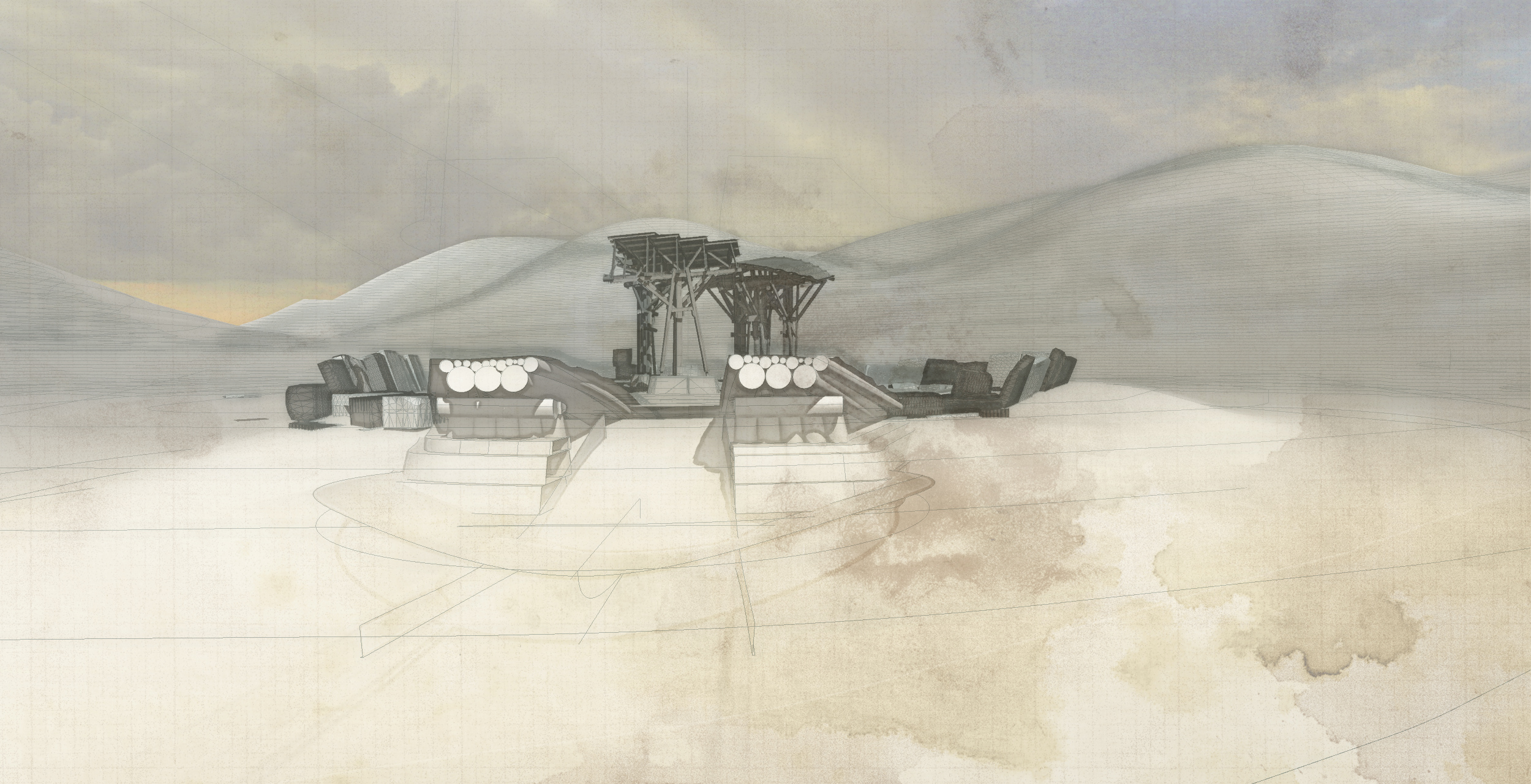 So the deal was done — signed figuratively in blood — then countersigned, approved, stamped, copied, distributed and locked away in a cabinet somewhere. The cold half of the year had set in by the time it was all official and irrevocable; and therefore the site was completely inaccessible as opposed to only extraordinarily difficult to reach.  So I was left, like Niggle tinkering with his painting before his journey, to develop my schemes using a survey (probably completed about the same moment as the royal thirst was quenched) and some old vacation postcards.  These latter primarily featured the now-collapsed crown-monument and very little useful information otherwise (granite, grass, pool, stream, mountains…was that a cottage in the distance?  What was the shadow across the valley in the background? A copse of firs?)… 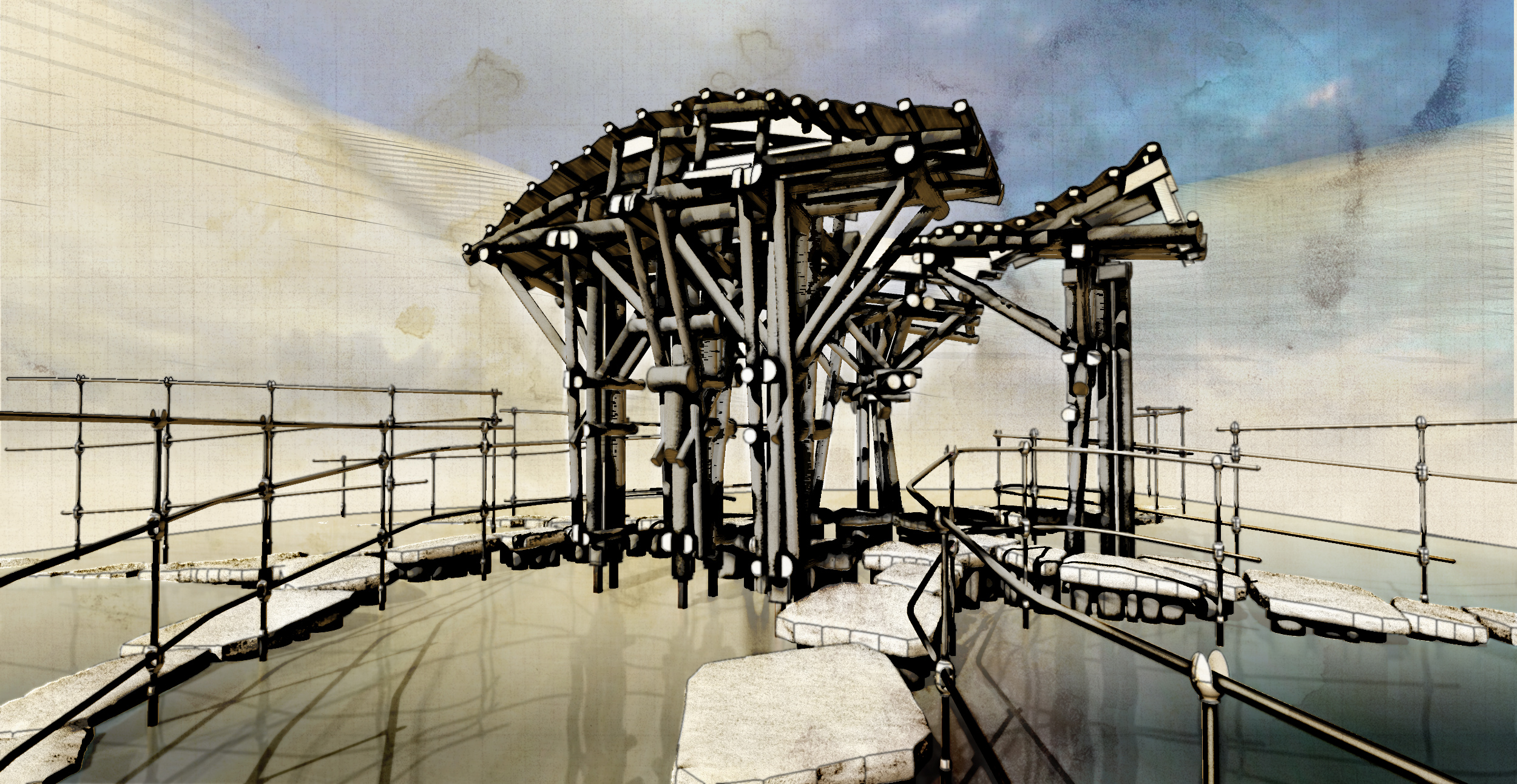 This “future monument” project shortly coalesced into “the Well of L” (2010), which would not receive the publicity or acclaim of my earlier fantasies.