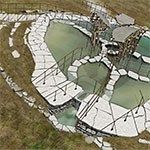 Yet another example of “experimental architecture,” or perhaps simply capriccio. The narrative: In an unpopulated valley in a northern country, there is a natural spring that has always been marked with some kind of monument. Originally this was a “holy well” perhaps the seat of some local deity and later the special charge of a martyred hermit. More recently, the   » More

Fresh off of the award ceremony for my fantasy project “Stormhouse” and enthused at the prospect of being considered “an experimental architect”, I began to develop a successor piece of fantasy combining architecture and landscape design. It was inspired by an actual if oddly-trivial nineteenth-century monument at an artesian well in Glen Mark, northern Angus, Eastern Scotland. As with the   » More