This very small two-bedroom townhouse in the South End Historical District in Boston is regulated by city ordinances to prevent any obvious alteration to its 1892 exterior facades, down to the profile of the window muntins. The project here included the replacement of those historic windows; the upgrading of the heating, plumbing, and electrical systems; and the installation of air conditioning. A restricted budget and limited construction time-frame (eight months) resulted in that most invisible of complex projects, where almost everything looks the same as it did before the work began but hopefully performs better. The budget was further constrained after un-repaired damage from an early twentieth-century fire was discovered to have compromised floor framing, requiring unexpected structural remediation.

The most visible work here was the reorganization of the basement level, which prior to the work consisted of a single bedroom, a very large utility and furnace room, and a small closet-like space with a toilet.  By altering the interior partitioning as well as by replacing the furnace and hot water tank with a small high-efficiency, on-demand water-heater/boiler, I was able to free up enough space in the basement for a tiled bathroom with a vanity and a door-less shower that fit ( both in terms of comfort and building codes) within a 7’3″ by 4’8″ area, thus making the bedroom at the front of this level actually a desirable one.  The improved layout is best understood by comparing the original floor plan for the basement level to our realized design. 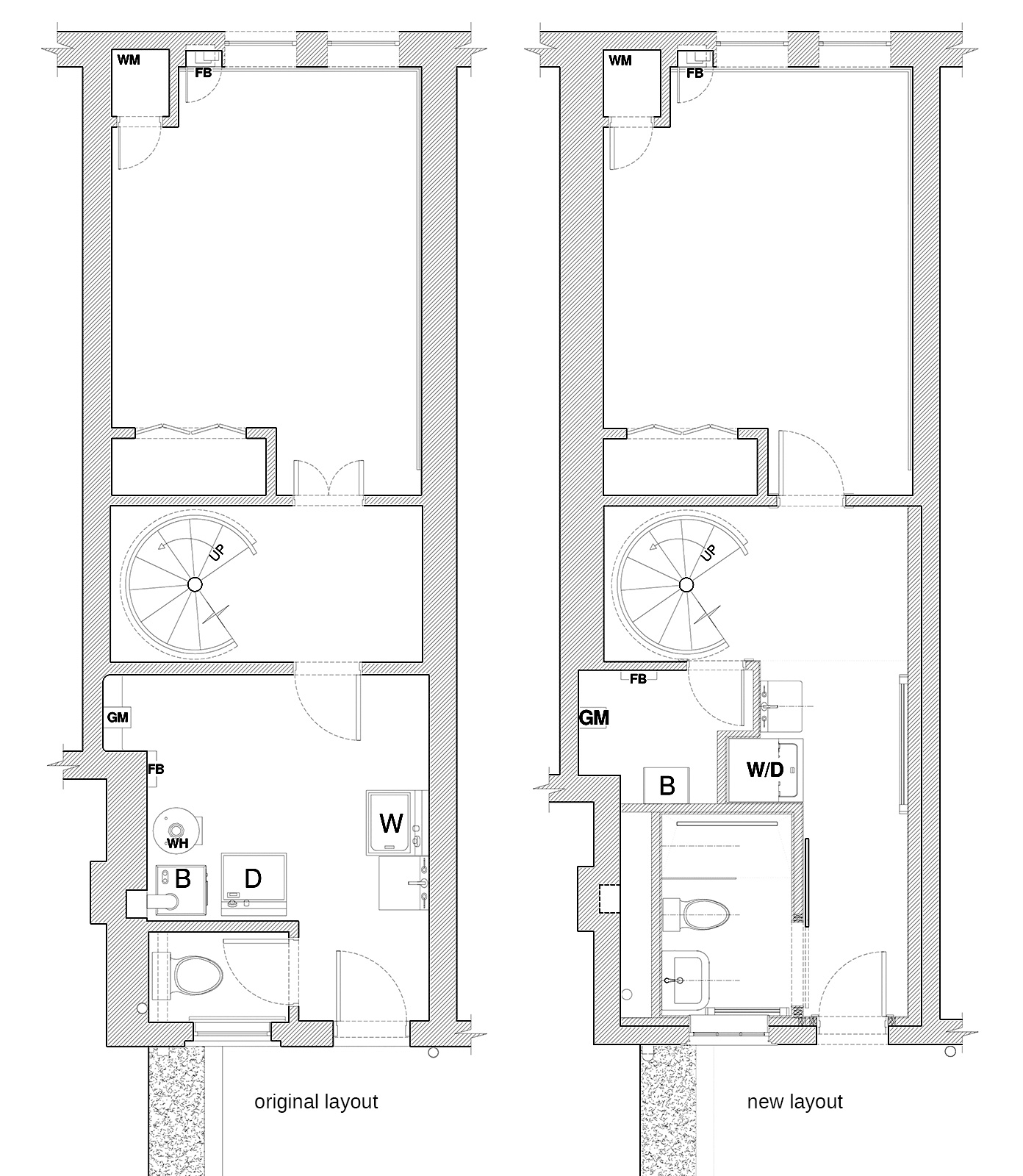 To save time and space in a very cramped construction site, I often supplied the builders with letter-sized critical “excerpts” from the construction drawings, which to my amusement I would find nailed to the studs in the corresponding locations in the building. 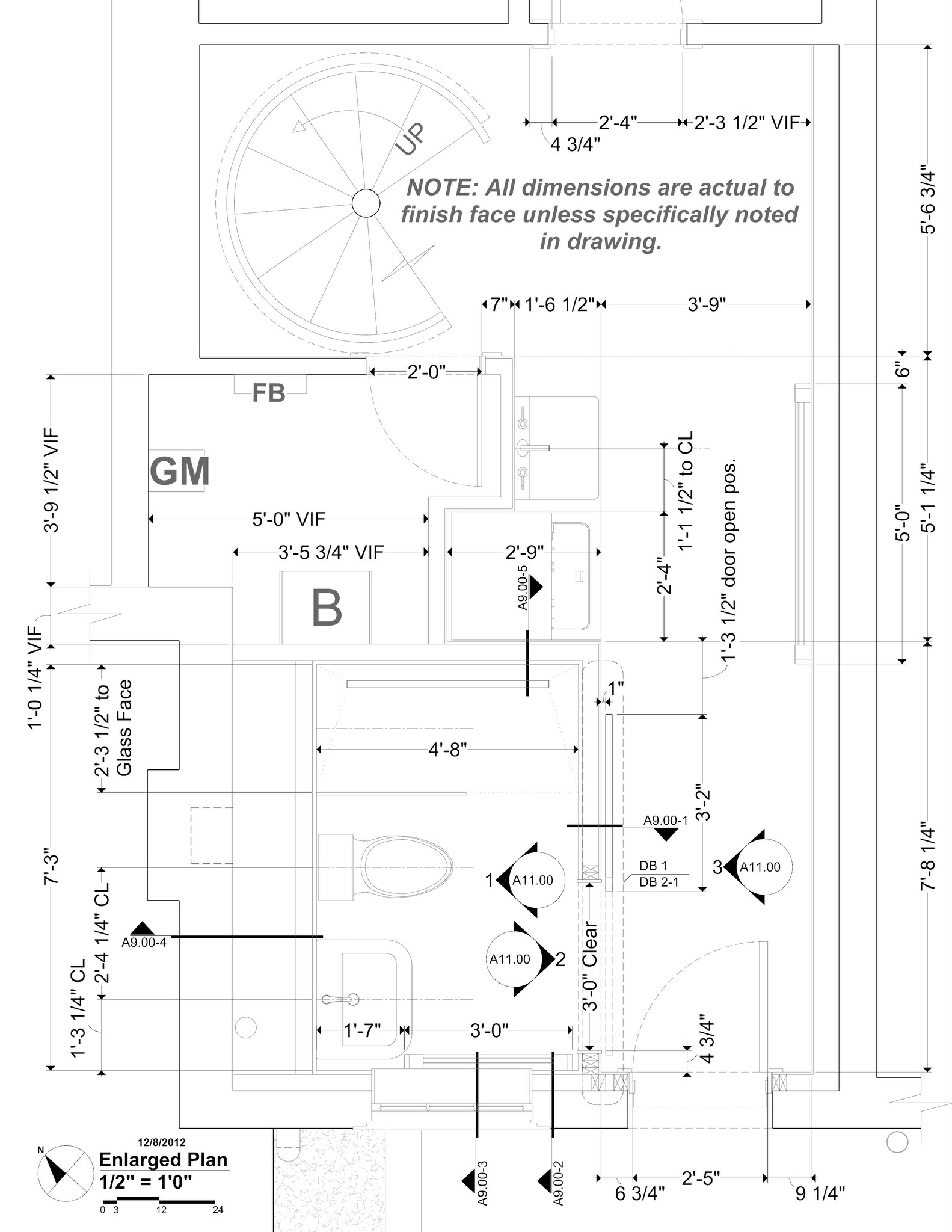 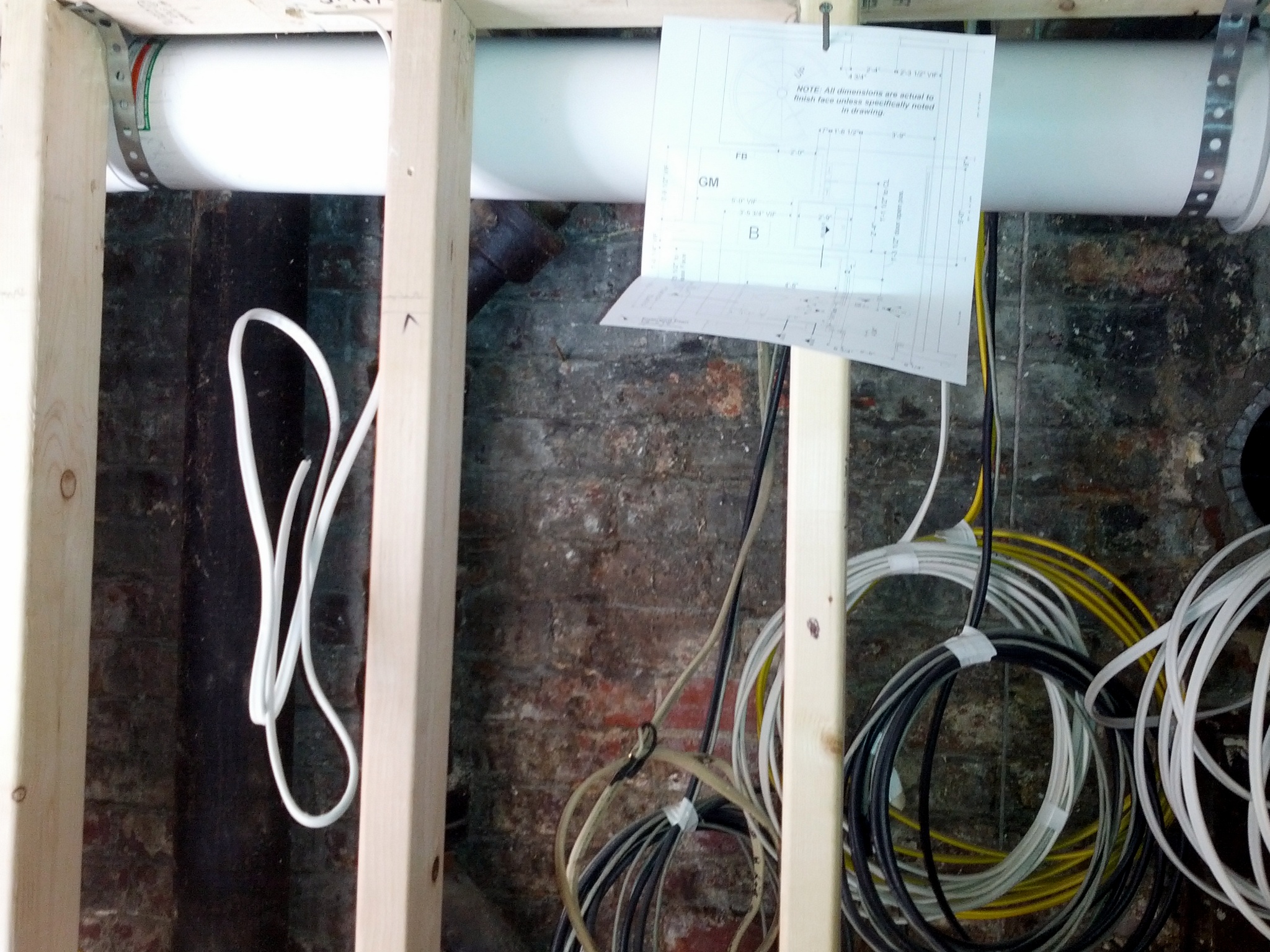 That “minimal bathroom” design required countless layout and finish studies, shared with the tradesmen in an effort to get the best results in the limited time and budget available. 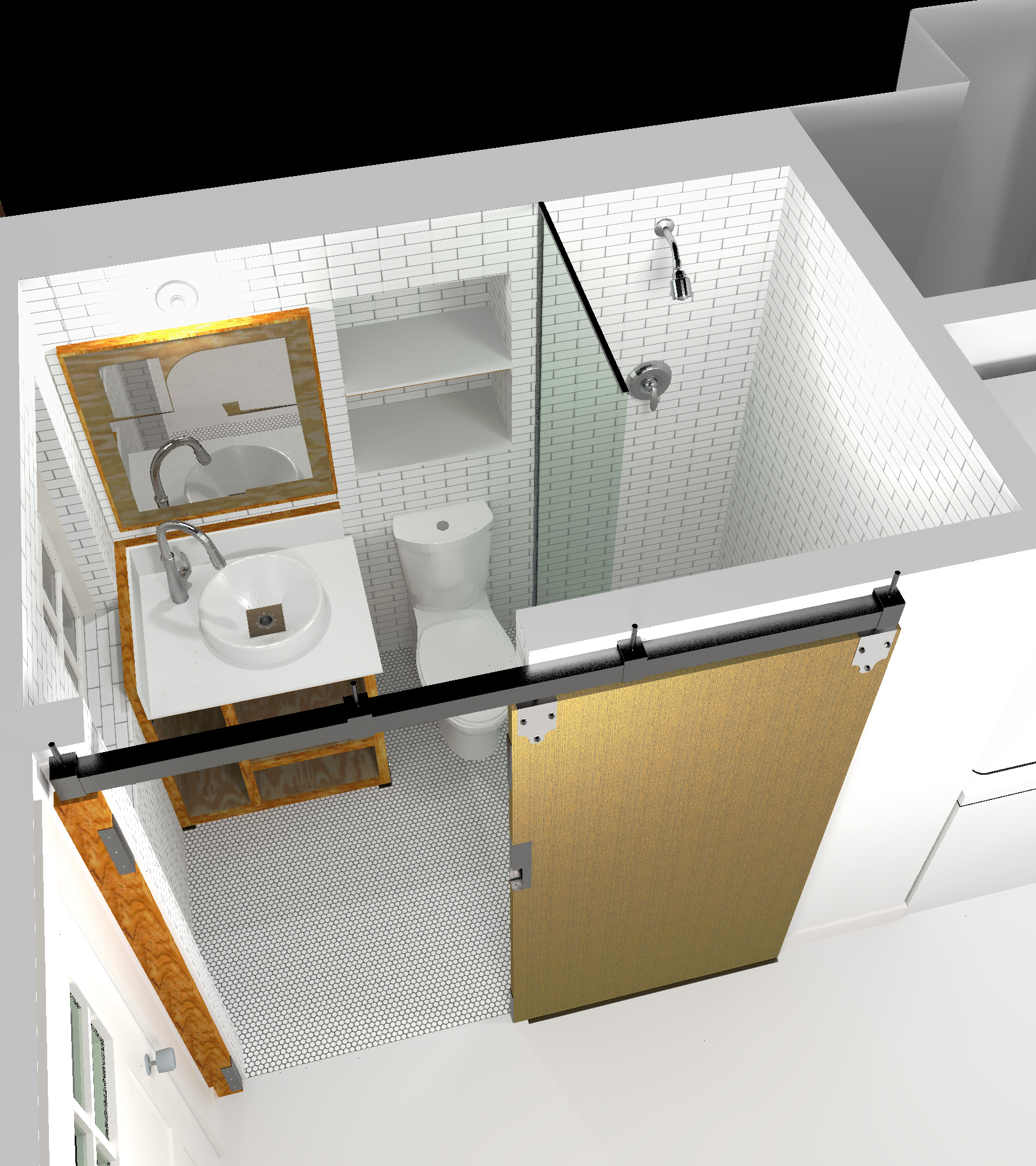 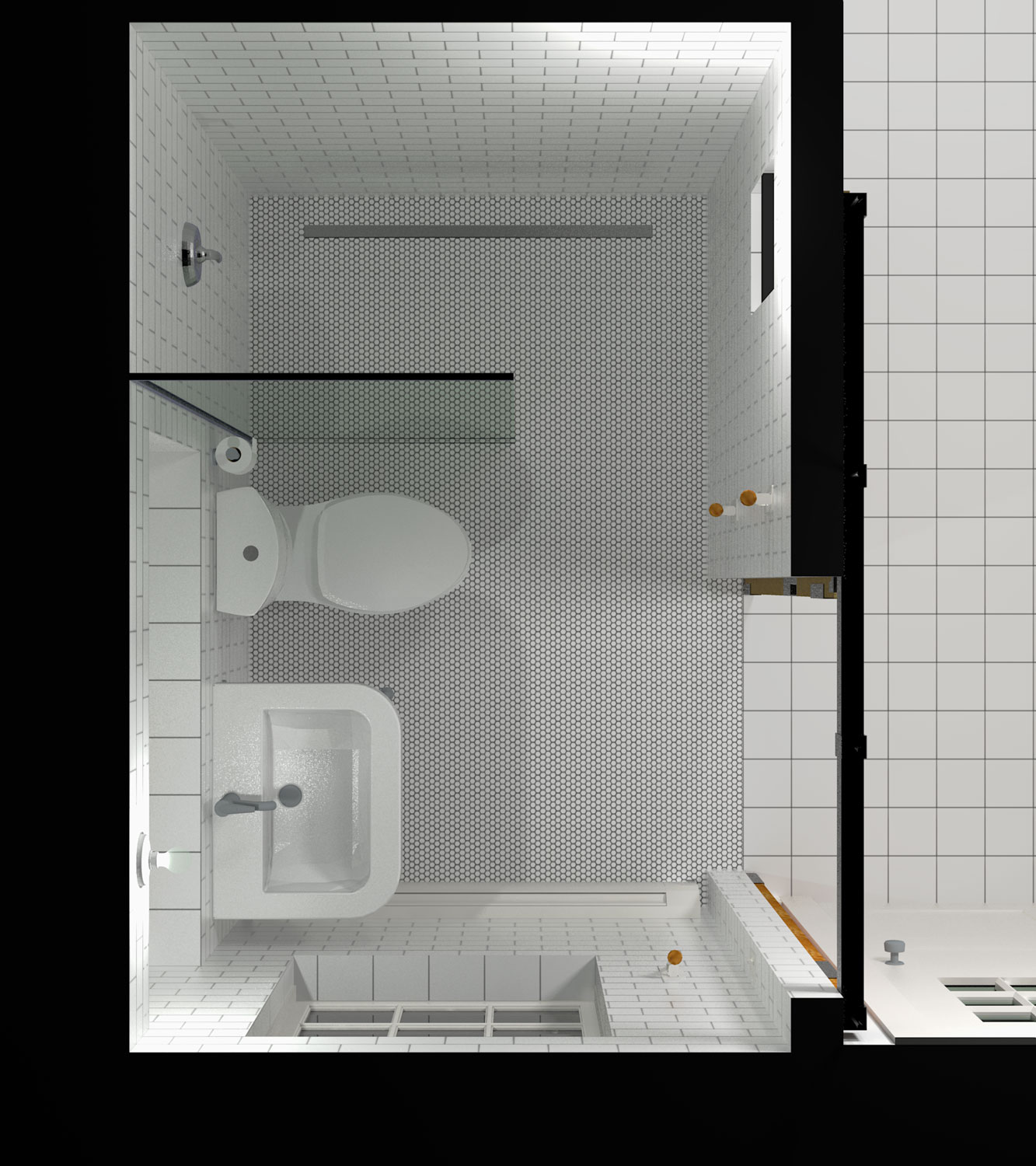 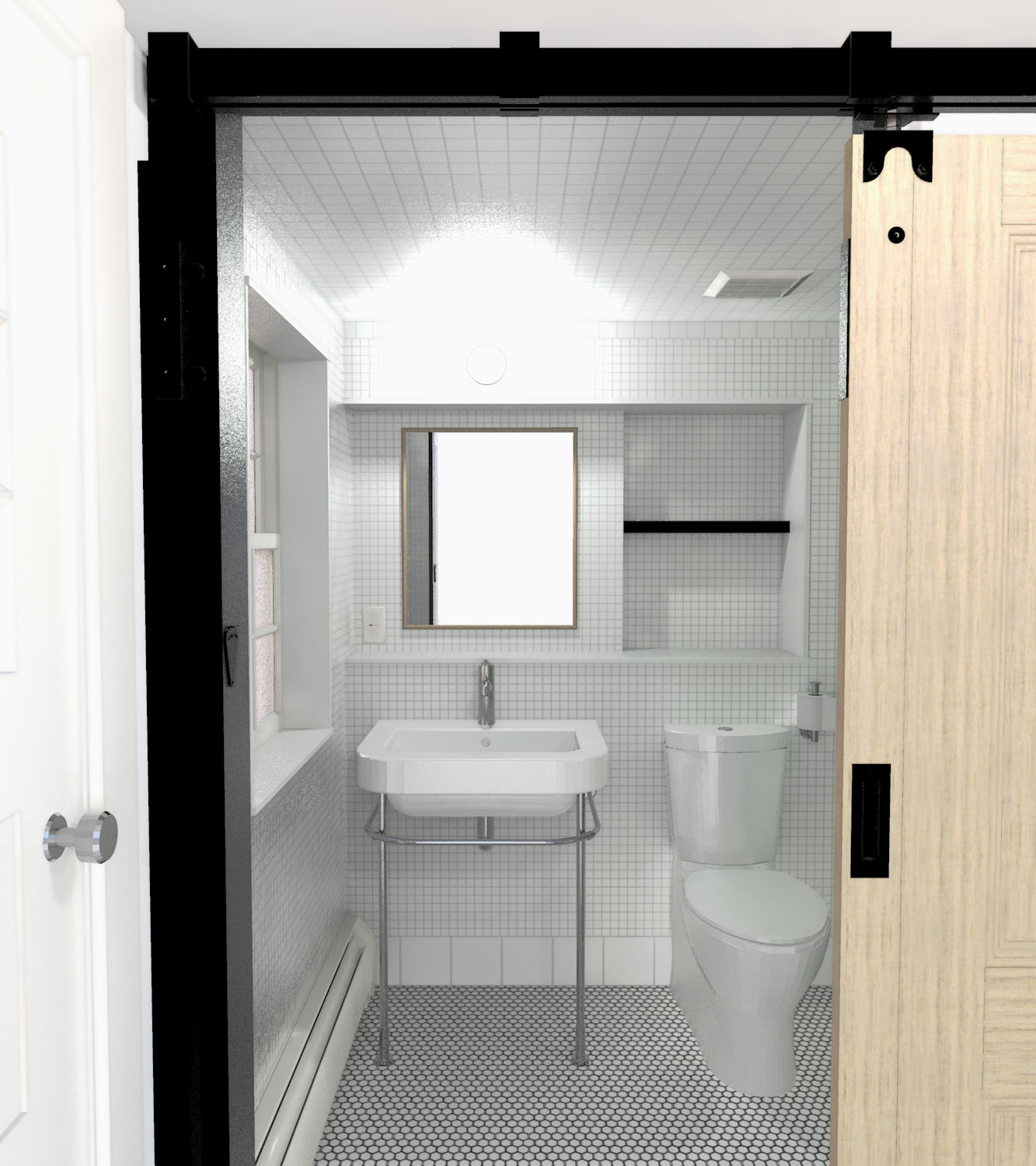 The builders asked for copies of renderings of the approved designs, claiming that these were nearly as valuable to them as the actual construction drawings. The little house was sold in June 2016 for a remarkably high price in a bidding war between multiple interested parties. The winning buyer promptly demolished it (with the exception of the facade elements protected by landmark regulations, of course) as part of of a renovation scheme developed by another designer.