This 4′ x 8′  piece of  shallow relief sculpture is mounted on four reinforced hardboard-surfaced panels that can be separated for easy relocation. In fact, I had no motivation for creating this project other than using up remnant supplies left over from building projects while creating a portable “pseudo-mural” for a large empty wall in one of my previous architectural projects. 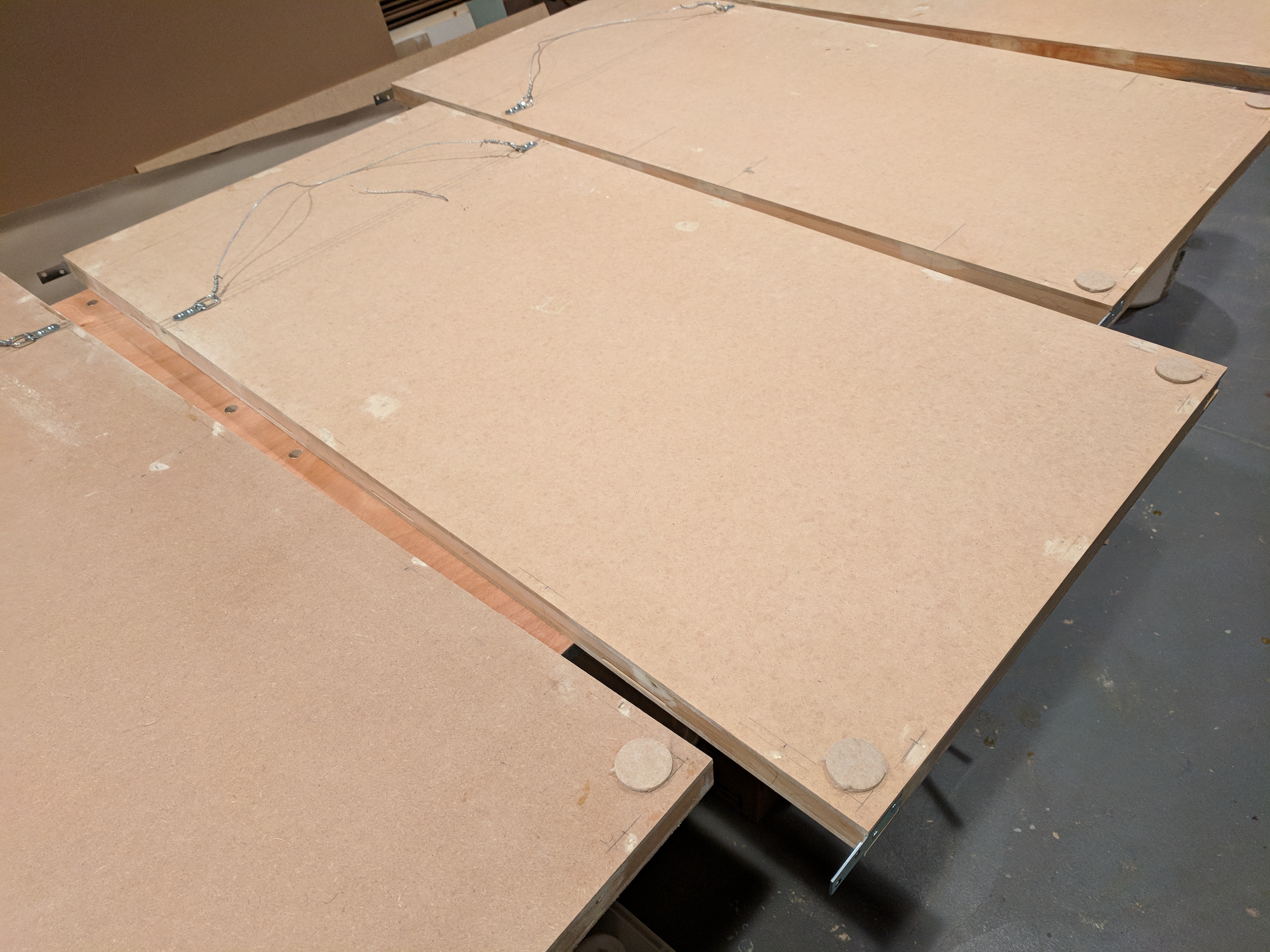 The formal concept for the piece came to me in something like a daydream: concentric shallow ridges in a rough, mud-like material, curving about a central circle with another surface treatment. I experimented in colored sketches (made with CAD and Photoshop on a laptop computer) where that central circle was gold-leafed in various patterns,  or enclosed a plaster-modeled map of a lunar surface, or both. 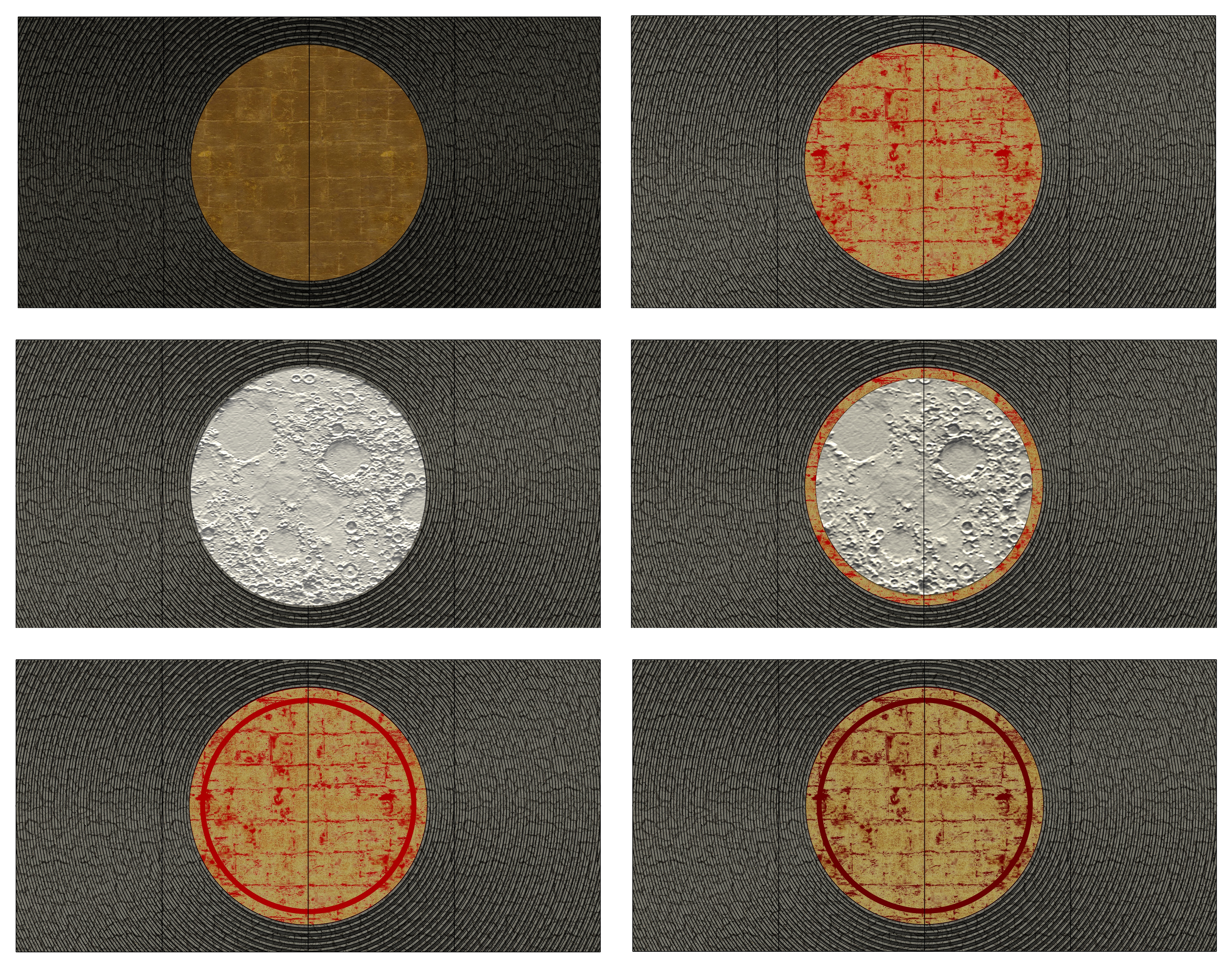 But with the vague memory of some Japanese or Korean porcelain as inspiration, I quickly settled on a Dutch metal-leafed, slightly-raised grid (the raised portions composed of old Sheetrock joint compound and glue), with the faux-gold leaf rubbed lightly back to reveal the bright red house-paint ground. 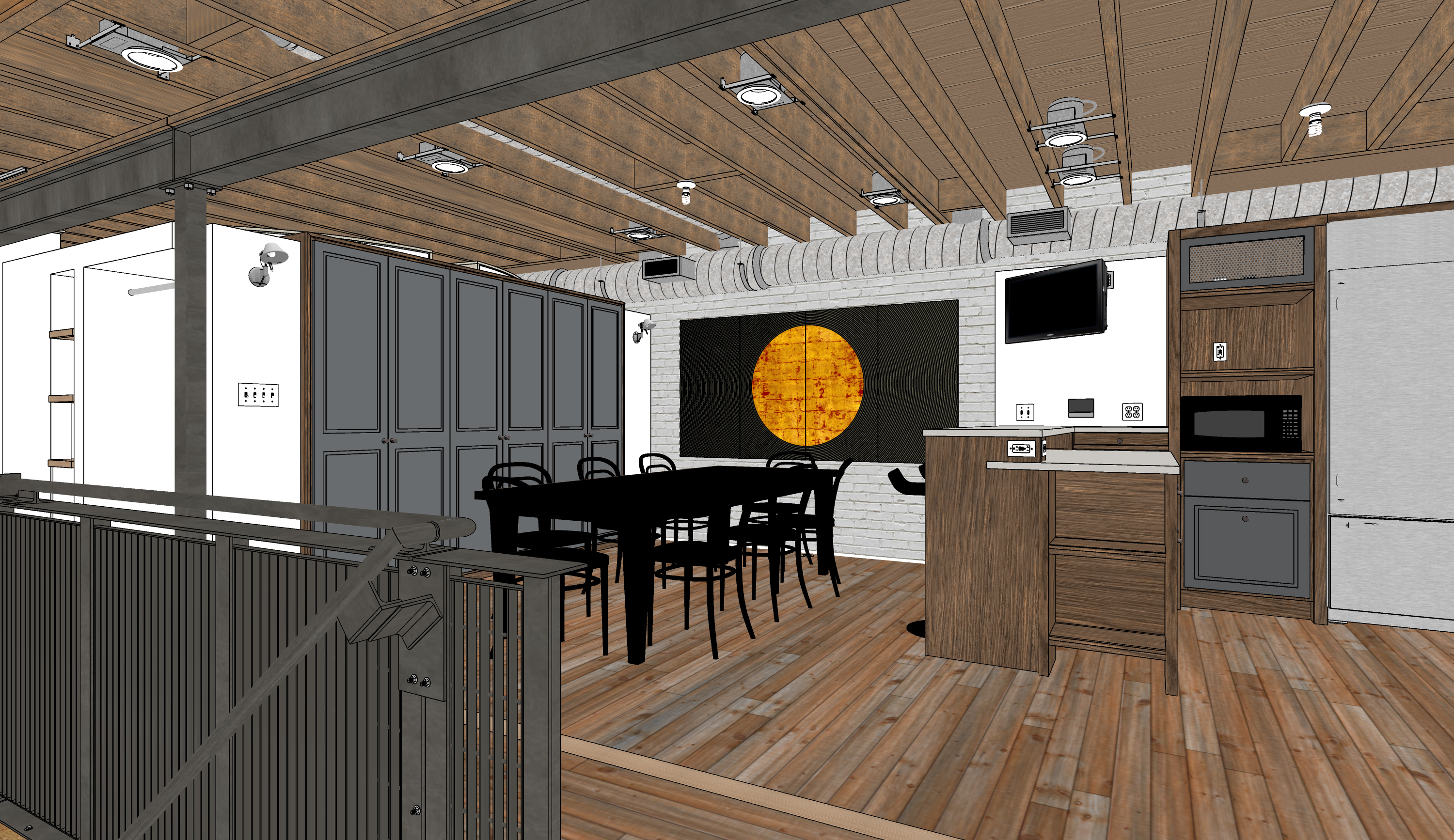 First, though, I used a giant “comb” made of scrap wood that pivoted about a center post to coax the trowel-applied layer of stiff artificial mud (made from old tile grout, plaster-of-Paris, glue, black house-paint, and sawdust) into the correct orbits about that center circle. 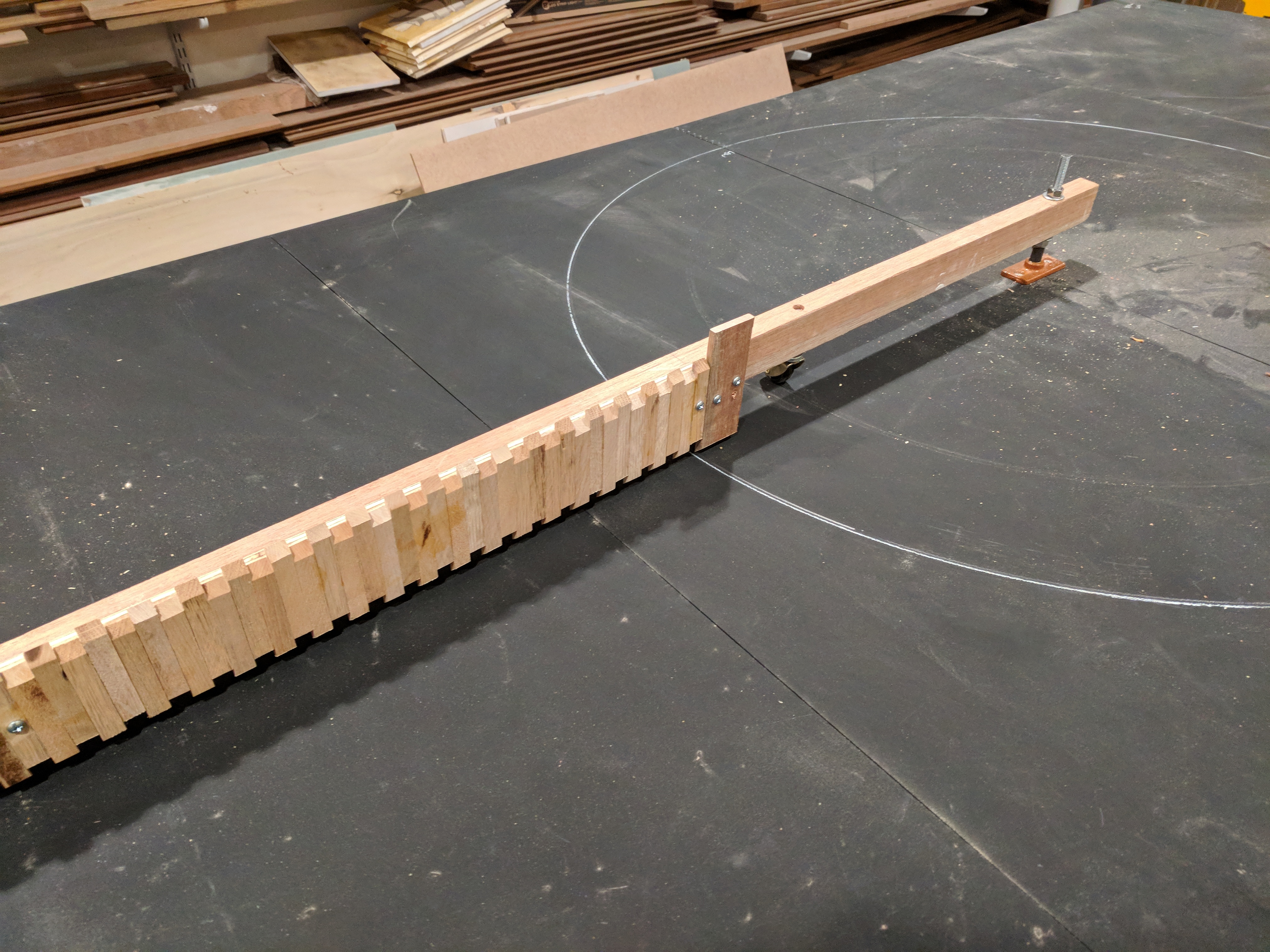 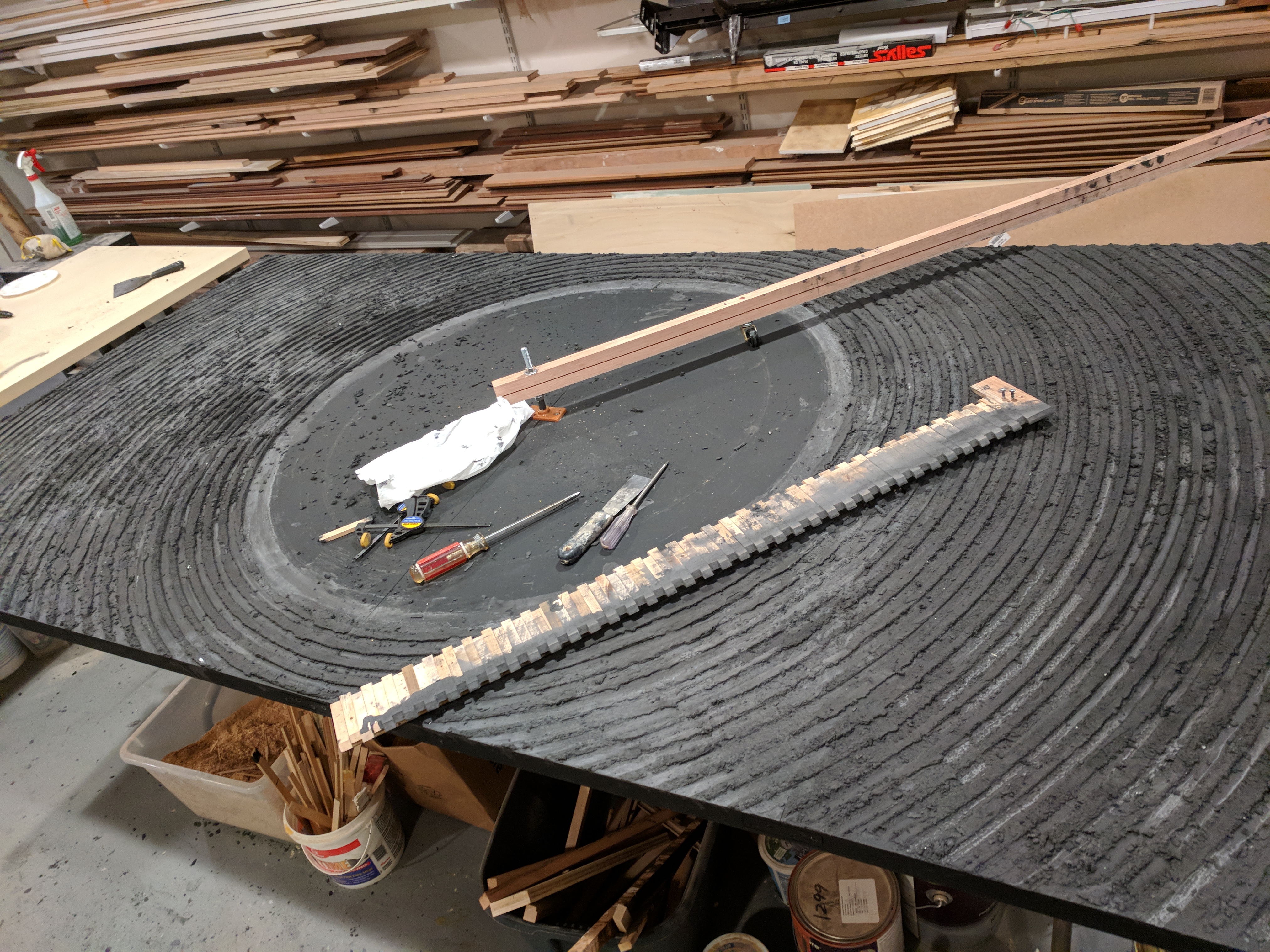 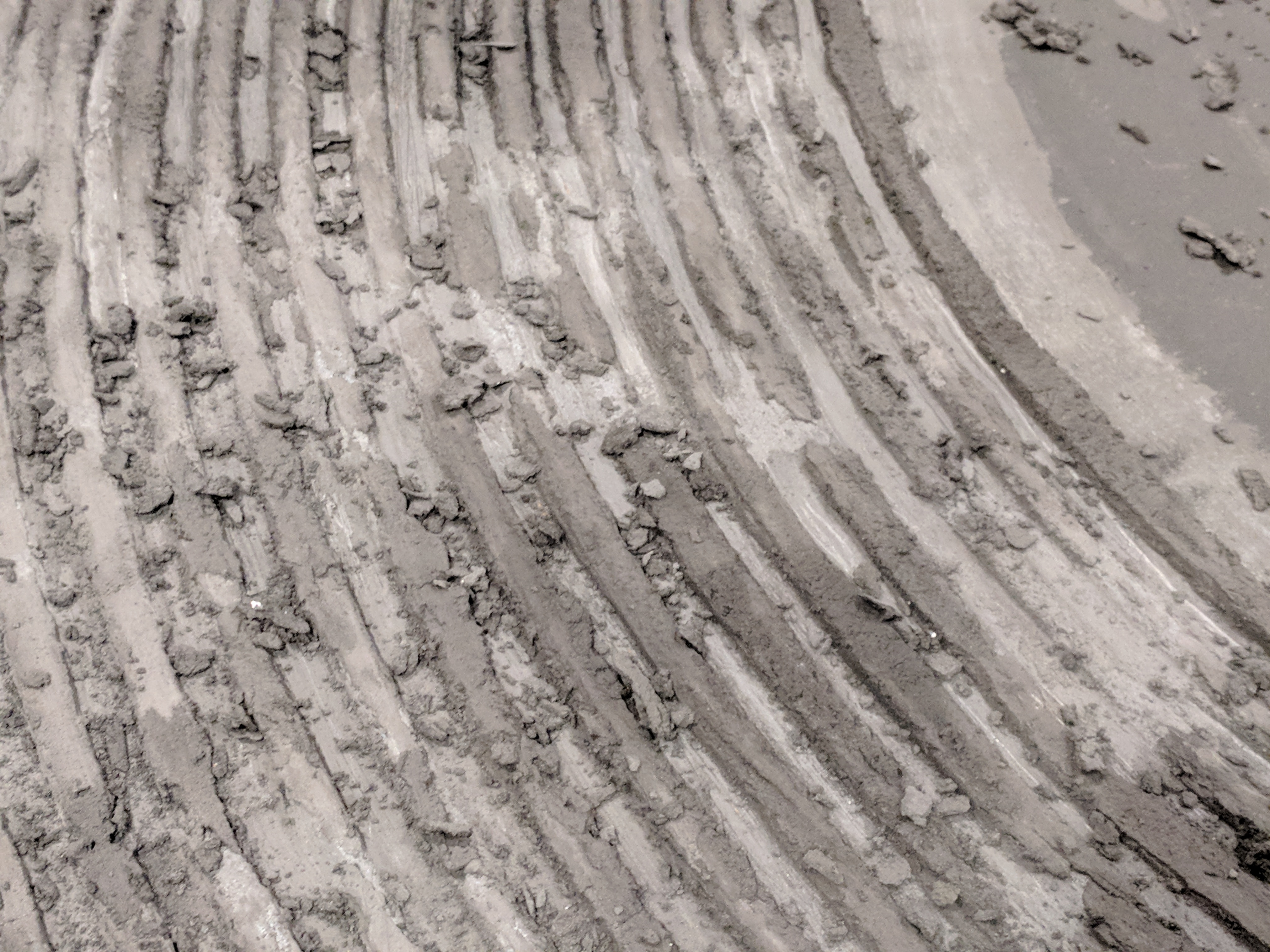 After they hardened, the encircling ridges and central grid were dusted with sawdust sieved to the fineness of true dust. This latter was fixed in the crevices of the ridges and the low points of the grid with a spray of diluted PVA glue mixed with old sepia ink. Finally, after the central circle was leafed and rubbed back to the desired degree, it was sealed with several coats of naturally-glossy light amber de-waxed shellac. 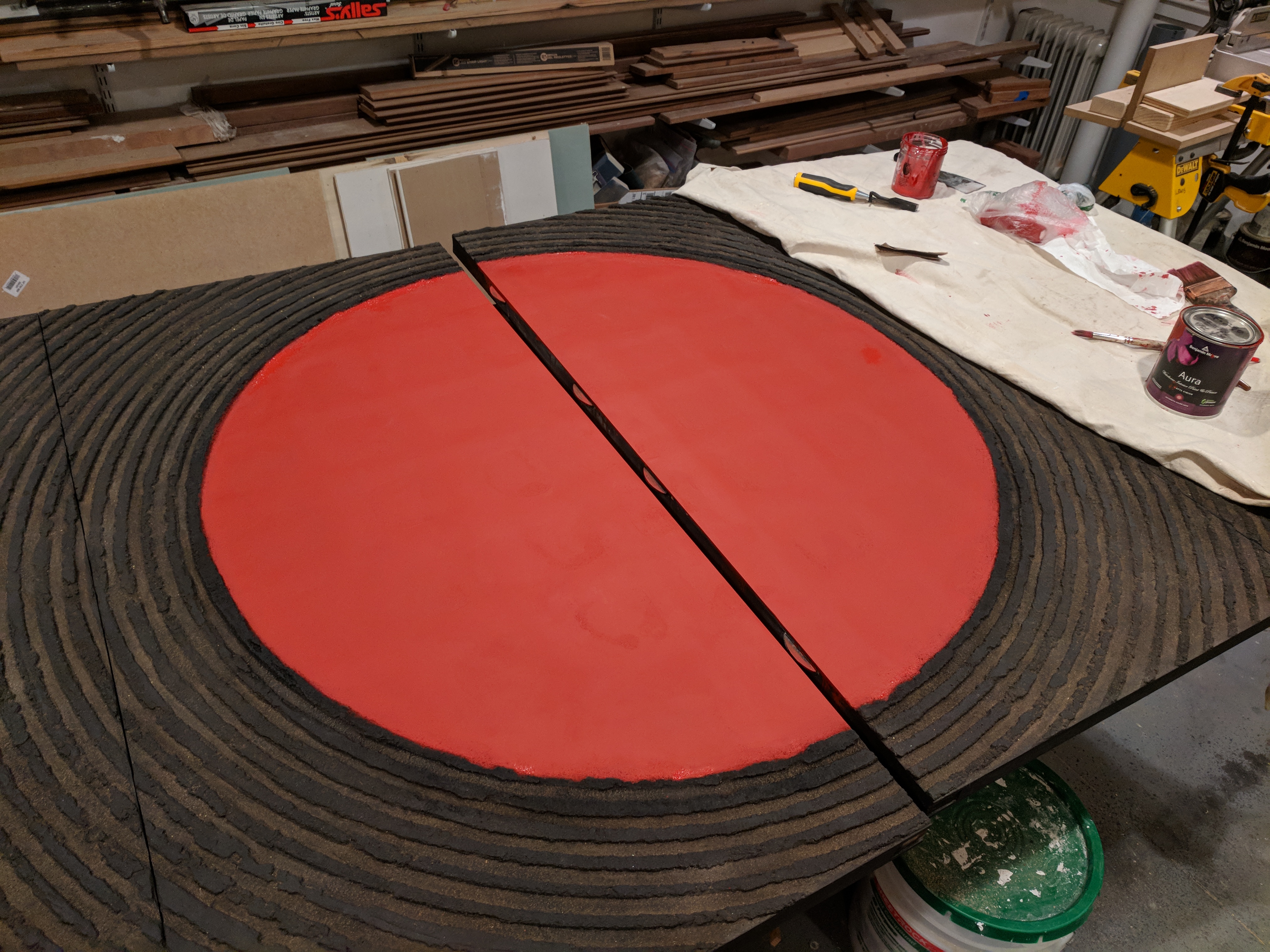 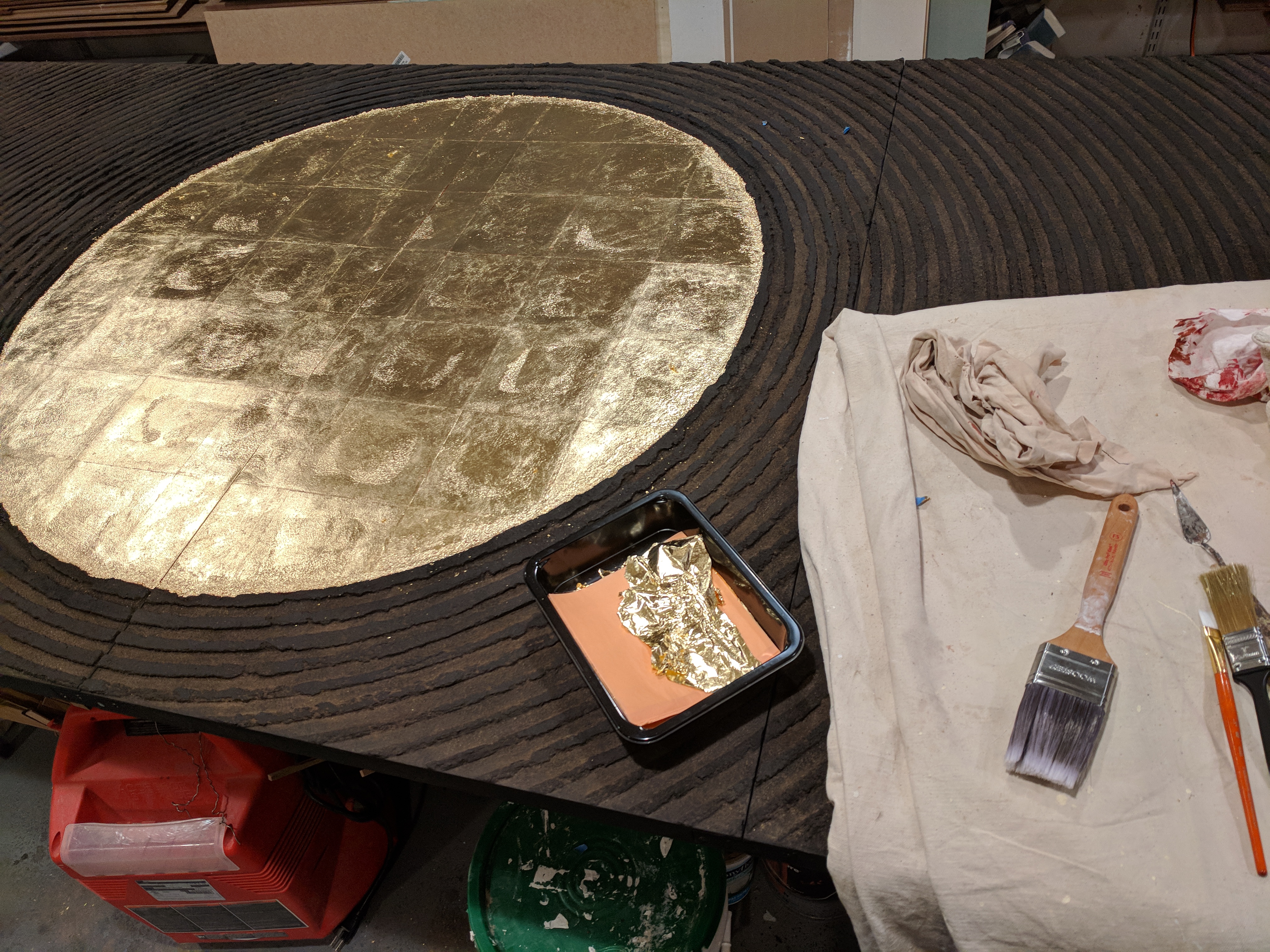 So what does it all mean, beyond the odd combination of techniques and materials? I considered several possible titles (it is my cynical observation that meaning in art, such as it is, is largely a product of its title).

“Klingon Home Furnishing” (One of my younger relatives suggested that all of my artistic endeavors fit in this unlikely category.) 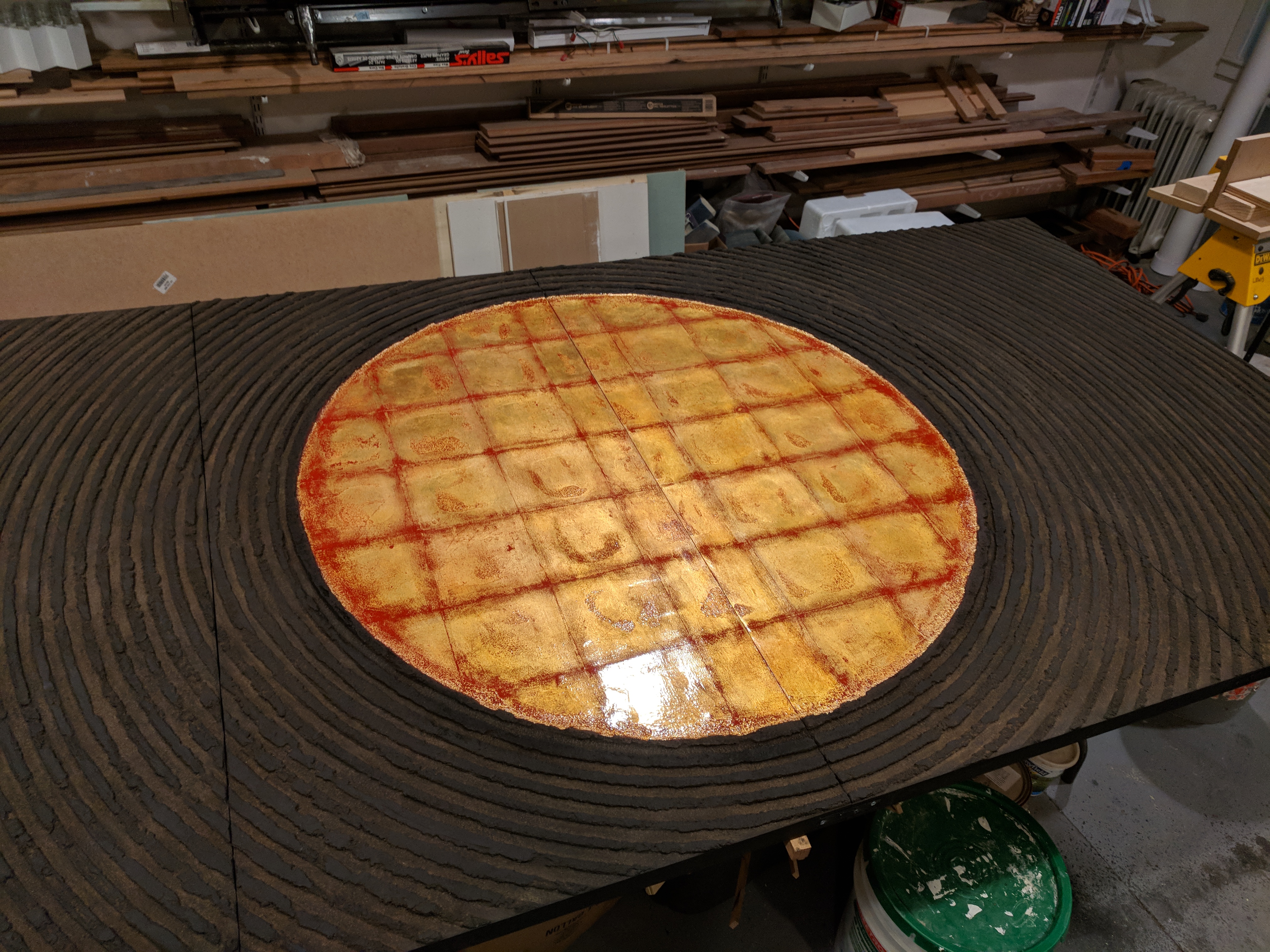 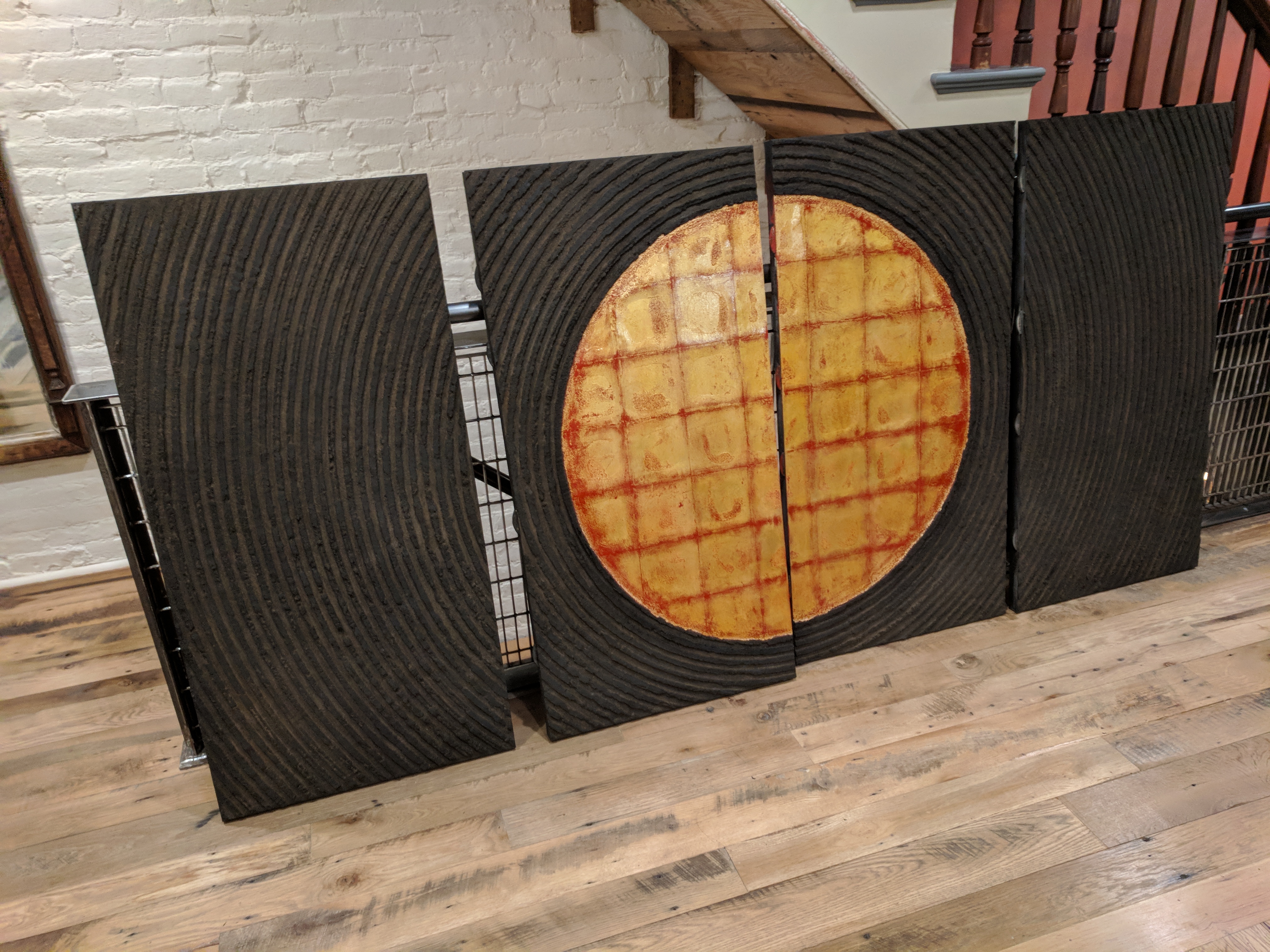 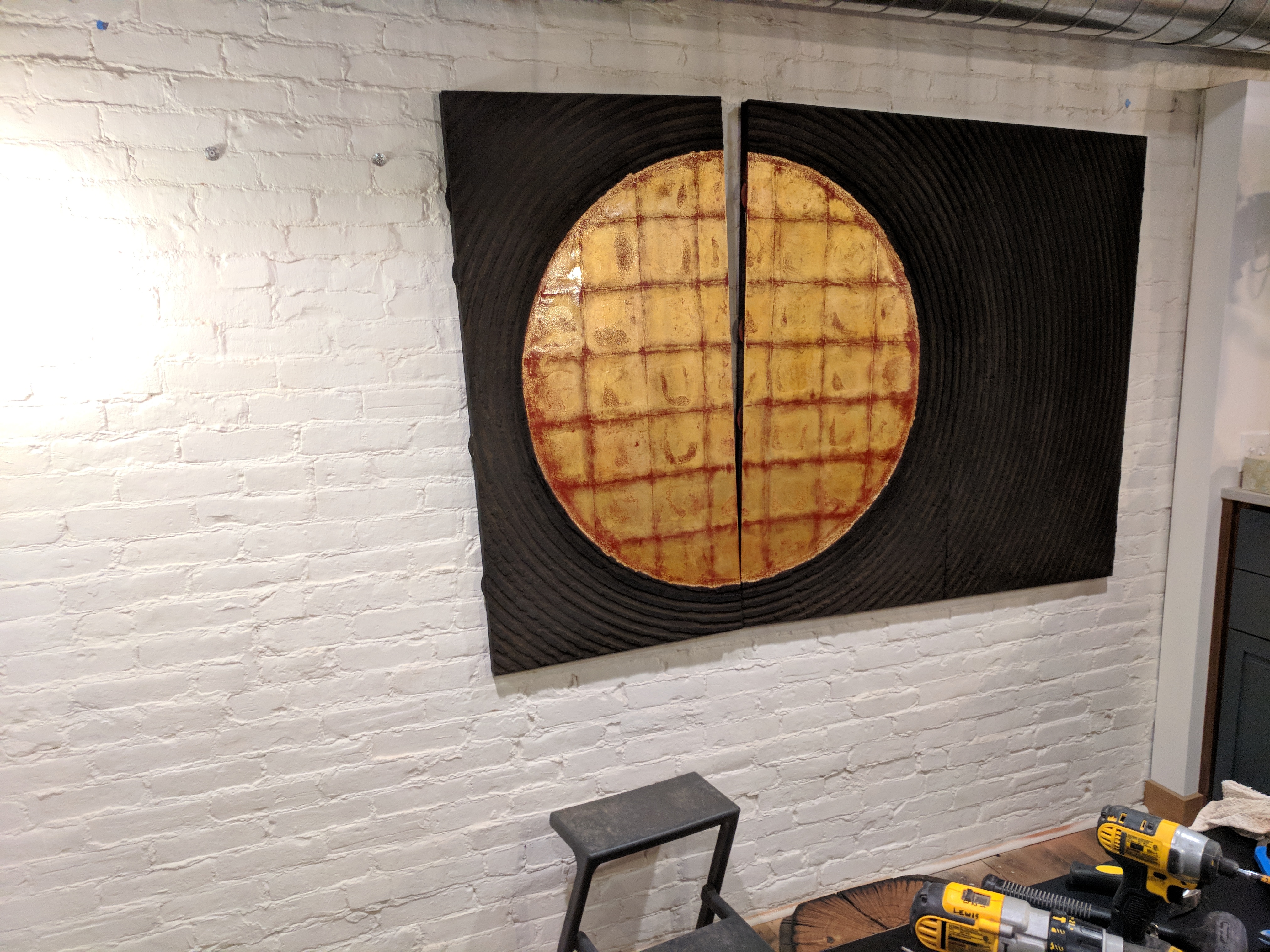 Eventually, I decided to imagine that I had chosen the most appropriate of these, or perhaps of some other set of potential names, and I left it at that. But sometimes, when I sit at the table with my back to this piece, I have the sensation that the gate of some infernal Hell is opening behind me. 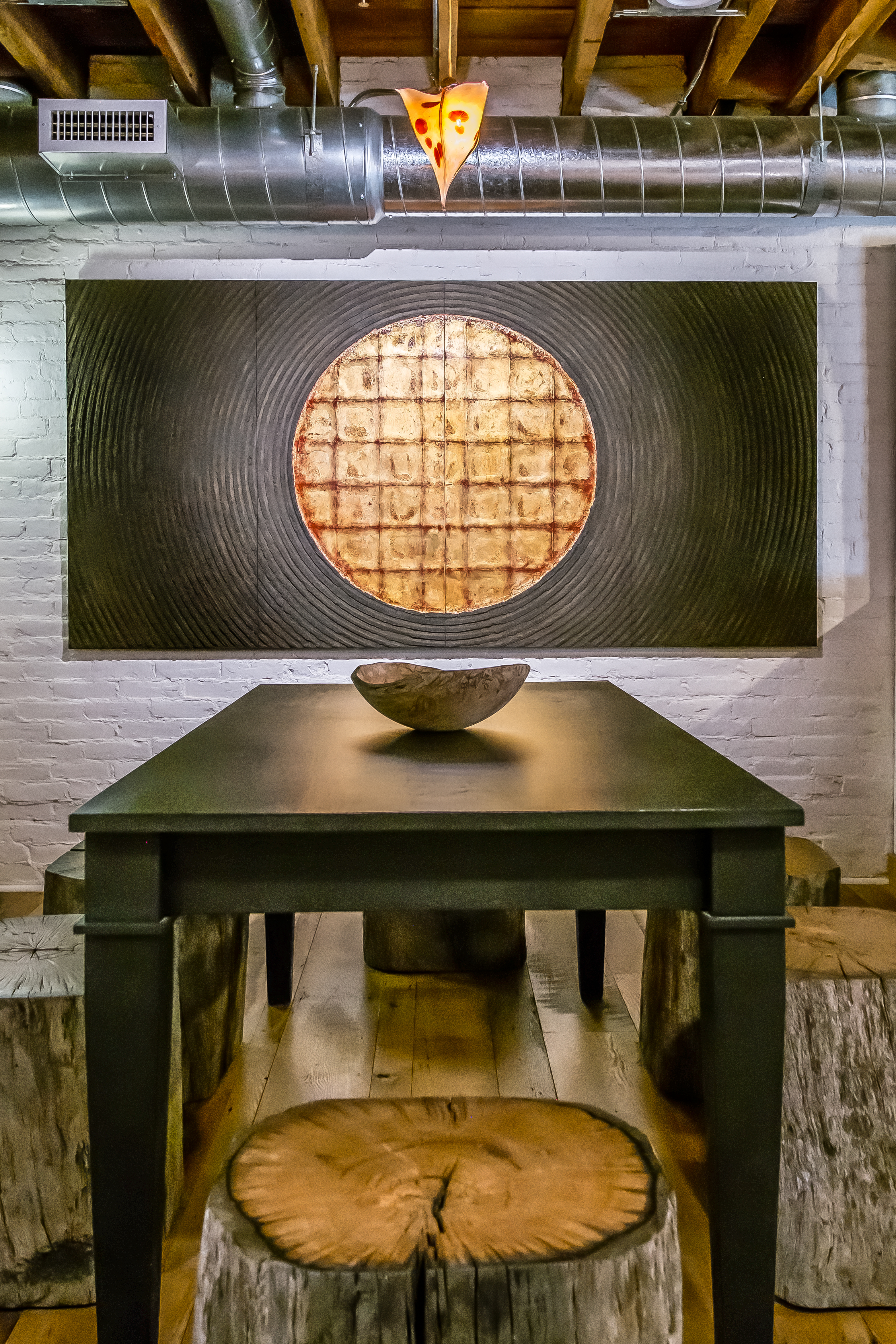