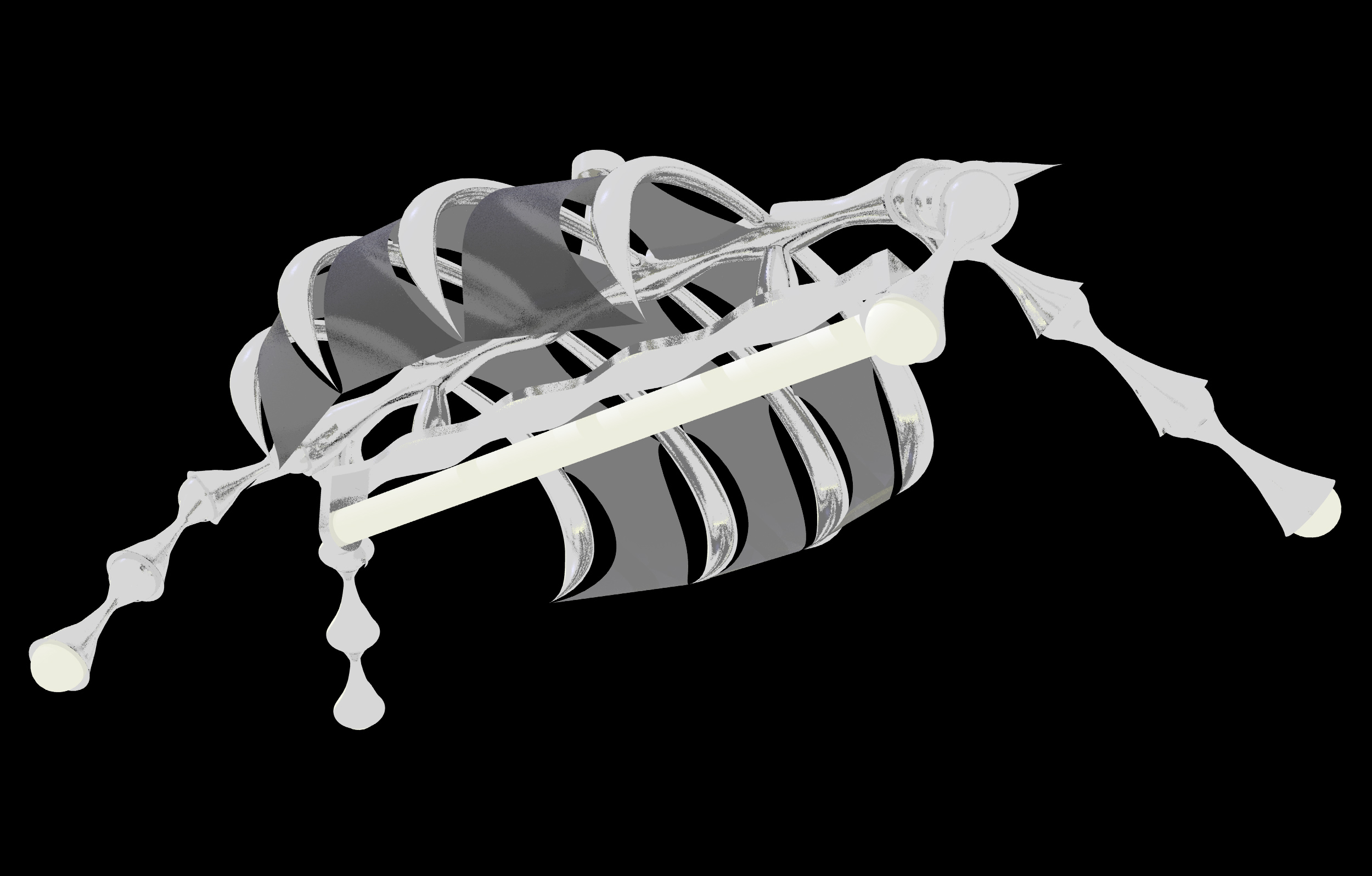 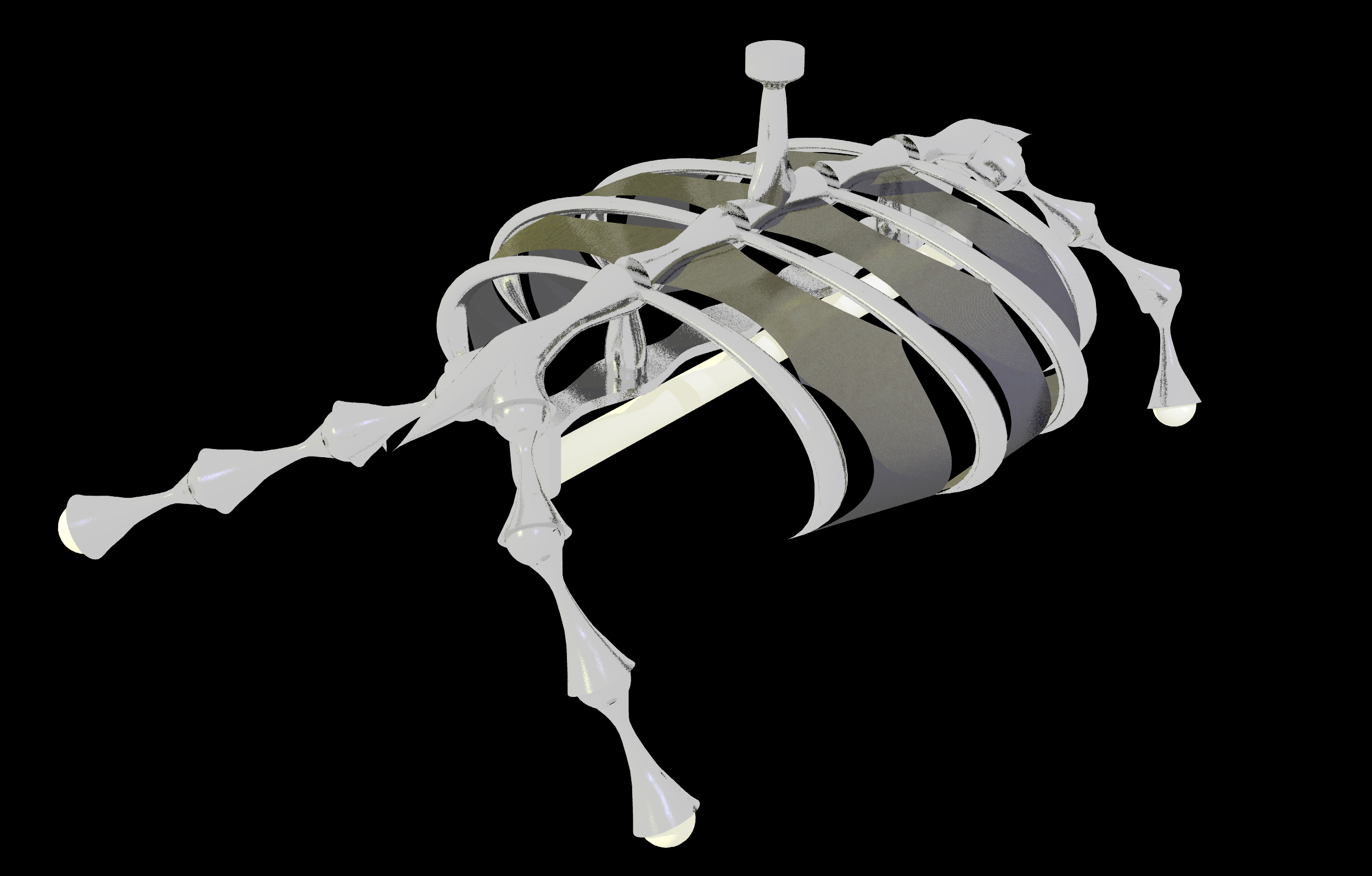 Near the end of my prolonged penance in architectural education, I found myself with enough credits to take an elective course, and I settled on one that dealt with aluminum casting. The curriculum required us to come up with an assembly of somewhat-mass-produced metal forms that could be created using basic sand-casting techniques; create the necessary match-plates which would be used at a local aluminum foundry to realize the components in aluminum; and finally see through any necessary joinery to complete the composite piece. There are a thousand subtleties and precautions necessary to successfully execute a sand-cast, but this is the gist of the process:

I’ve often wondered if the true pedagogic point of the course in this topic was to convince tyro architects to stay as far away as possible from the design of cast-metal objects. Resisting that impetus, and not being particularly interested in abstract (or even pointless) exercises in the expenditure of time and metal, I decided to create a light fixture that would hang over my own dining room table after I graduated, as a reminder of (to borrow an experiential category from a Migraine Boy comic) “all the good times” I had at architecture school. With this in mind, it became obvious that the only suitable form for a memento of my “professional” education would be the skeleton of a dead animal.

And I even CNC-milled a scale model of this beast in EPS foam to test my concept before moving to more expensive materials. 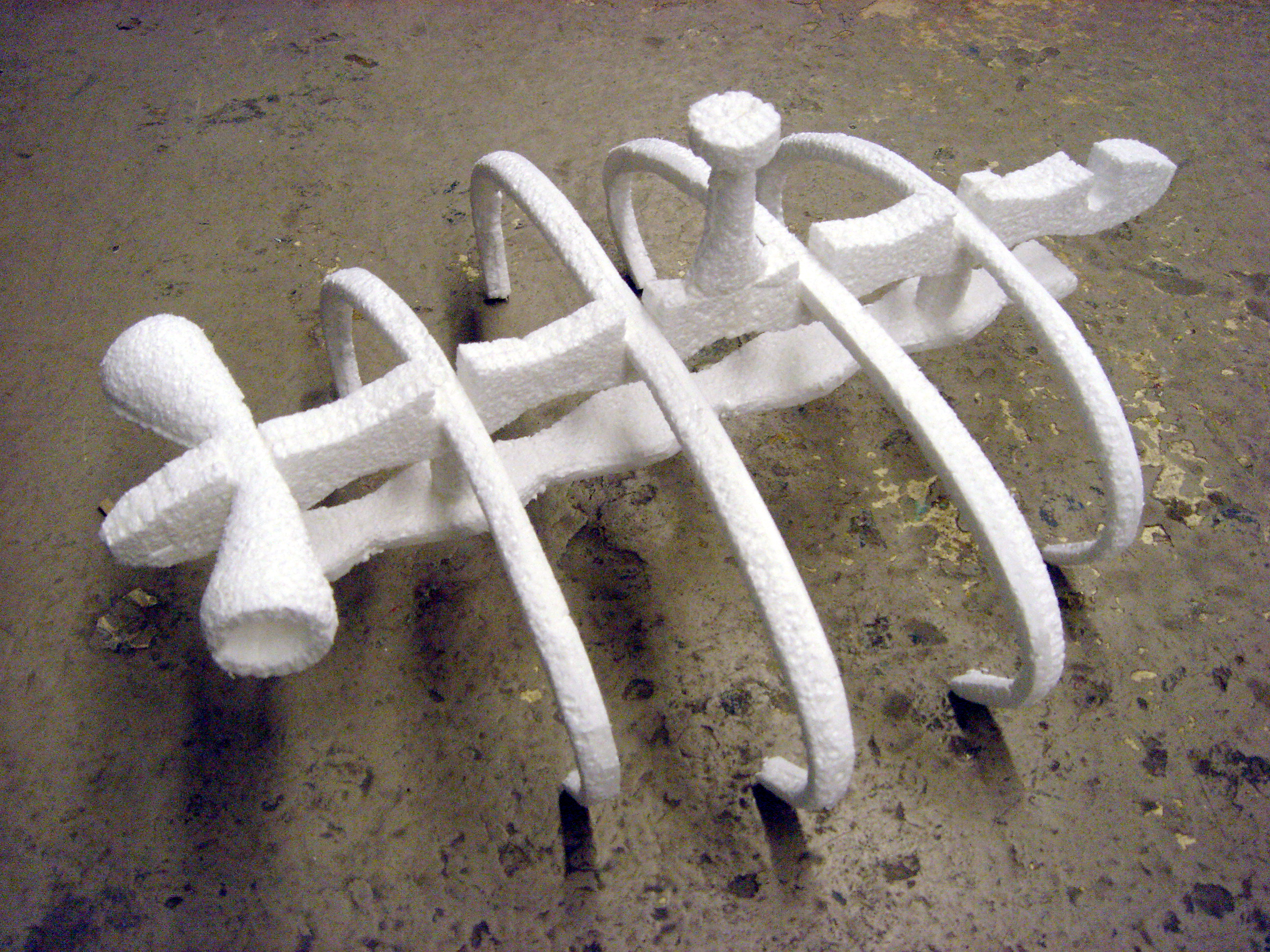 Even though I was able approximate a basic component in the foam model, the tentacle-limbs which held the spotlights in the initial design of this fixture proved particularly difficult to conceptualize as a basic positive formal element attached to the pattern, composed as they were of hollowed conical forms something like a succession of bathroom shower-heads. Years later I developed an idea as to how this might be accomplished, but of course I no longer have access to the necessary fabrication equipment or even a foundry.

The second version of this design saw the replacement of the metal “spine” (from which depended the limbs, the ribs, and the metal platform that held a fluorescent tube), with a milled piece of hardwood, mainly in the interest of limiting my aluminum expenses. In fact, due to similar financial considerations, the final version of the spine would be cut, not milled, from inexpensive poplar boards using a carborundum water-jet, and this would be painted to disguise its base nature. The platform that supported the central light tubes would also be cut from flat stock with a waterjet, as opposed to cast. I had found a decently-sized fragment of quarter-inch aluminum plate abandoned in a pile of scrap-wood. 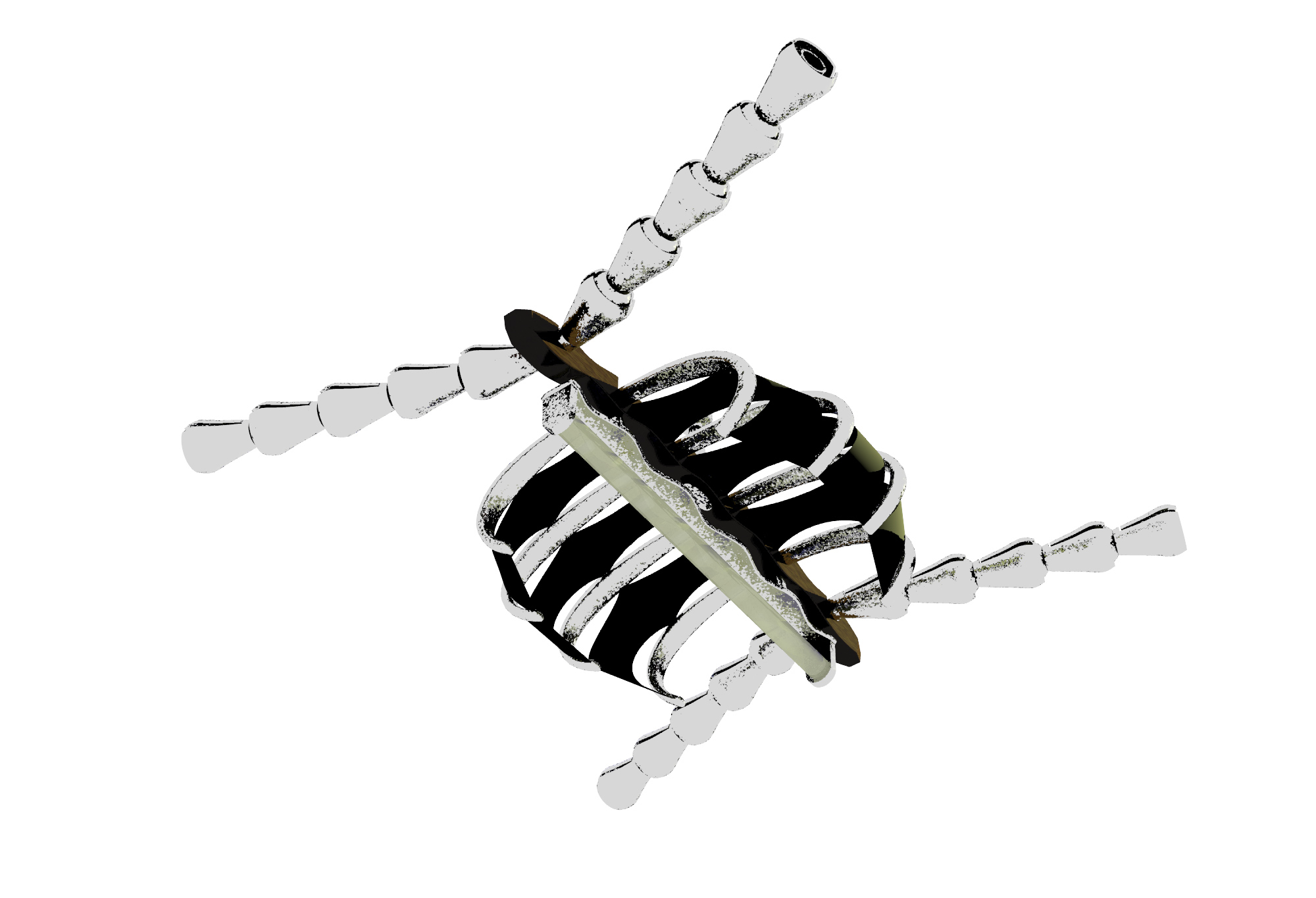 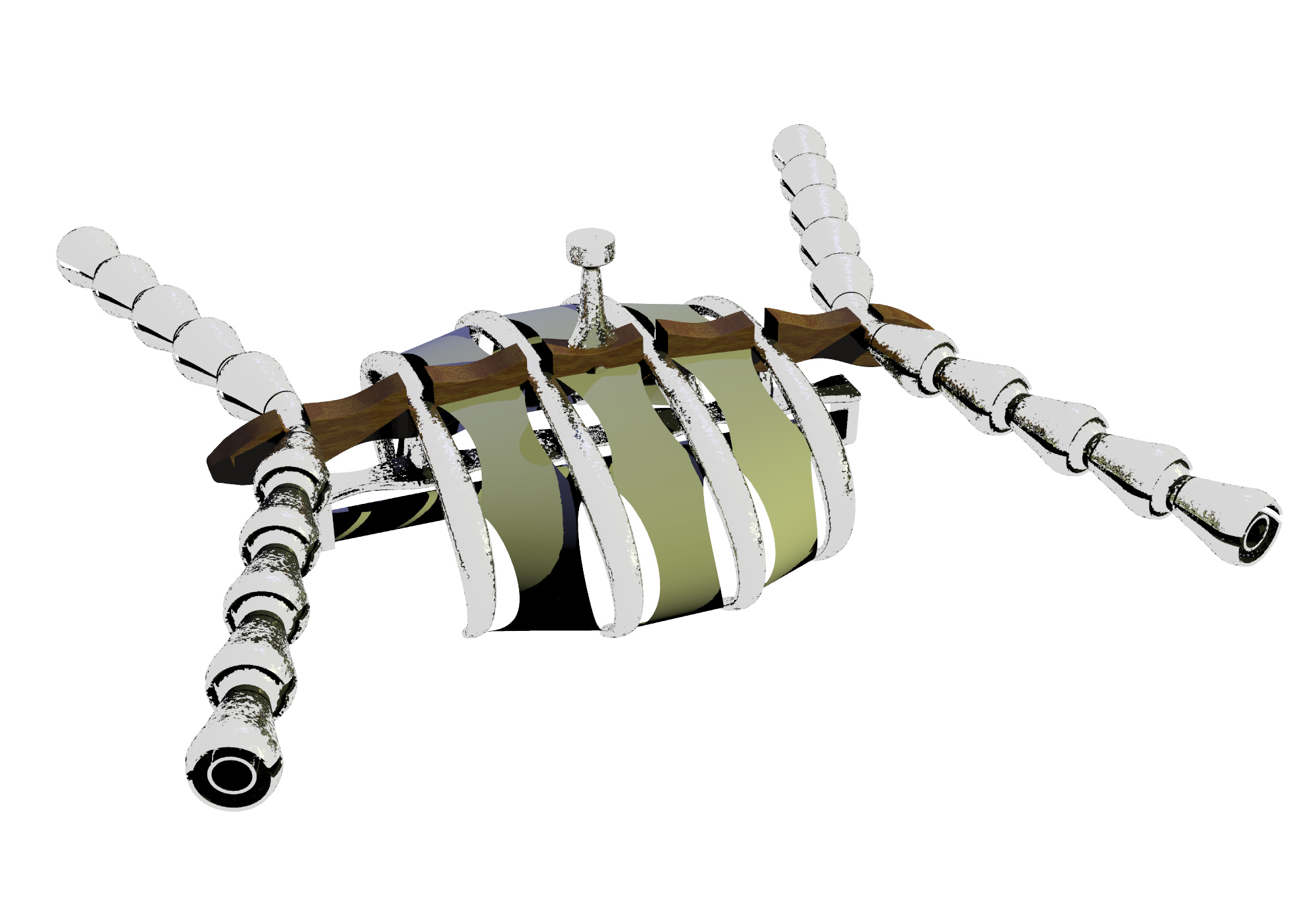 Some concern over the discomfort that one might experience while staring up from a dining table at a naked fluorescent light source prompted me to switch the position of the tube-holding platform and the spine, so that the latter now depended from the former. Of course, anyone who is willing to dine under a light fixture reminiscent of an animal’s skeleton will presumably have a somewhat unique notion of comfort. 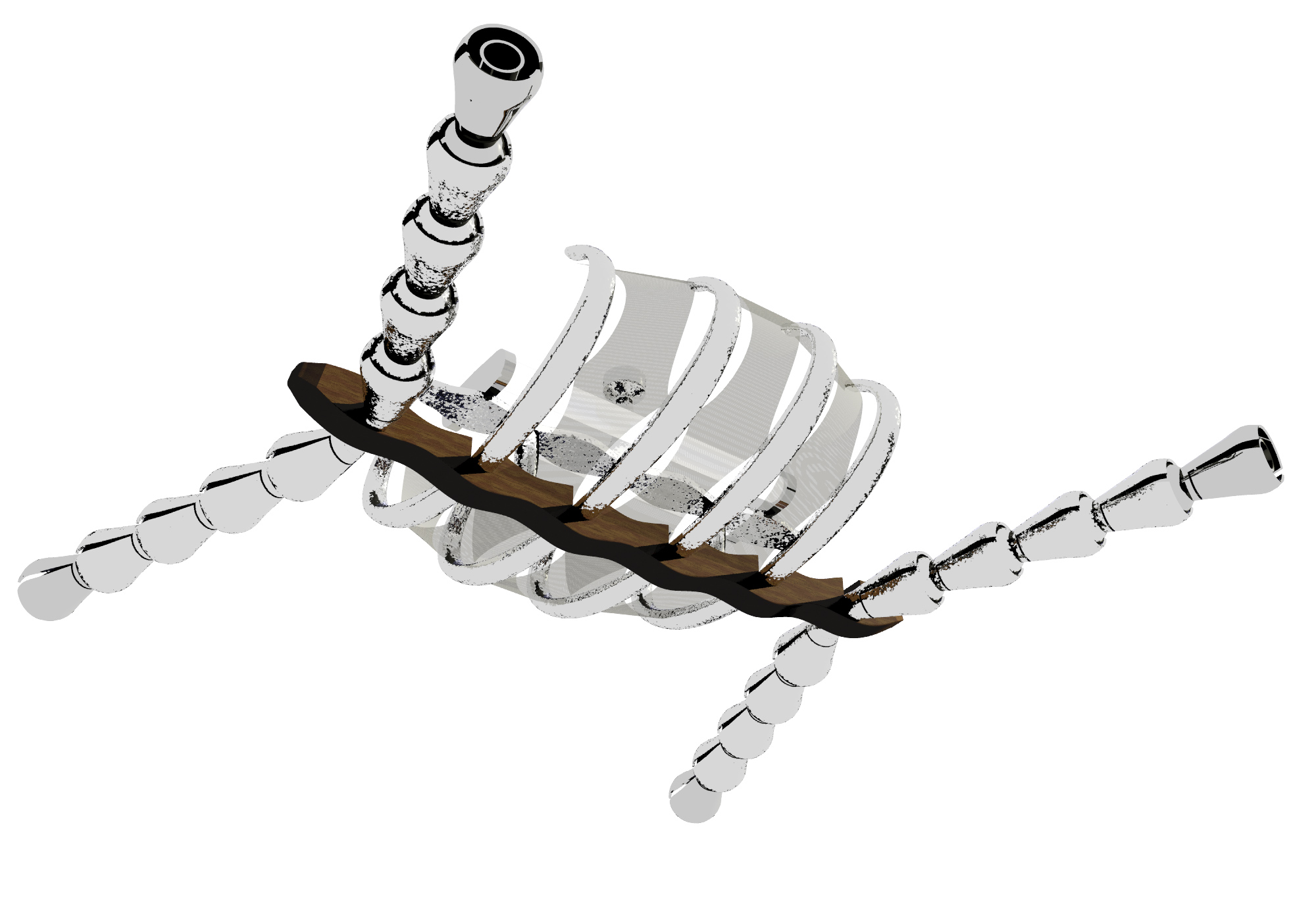 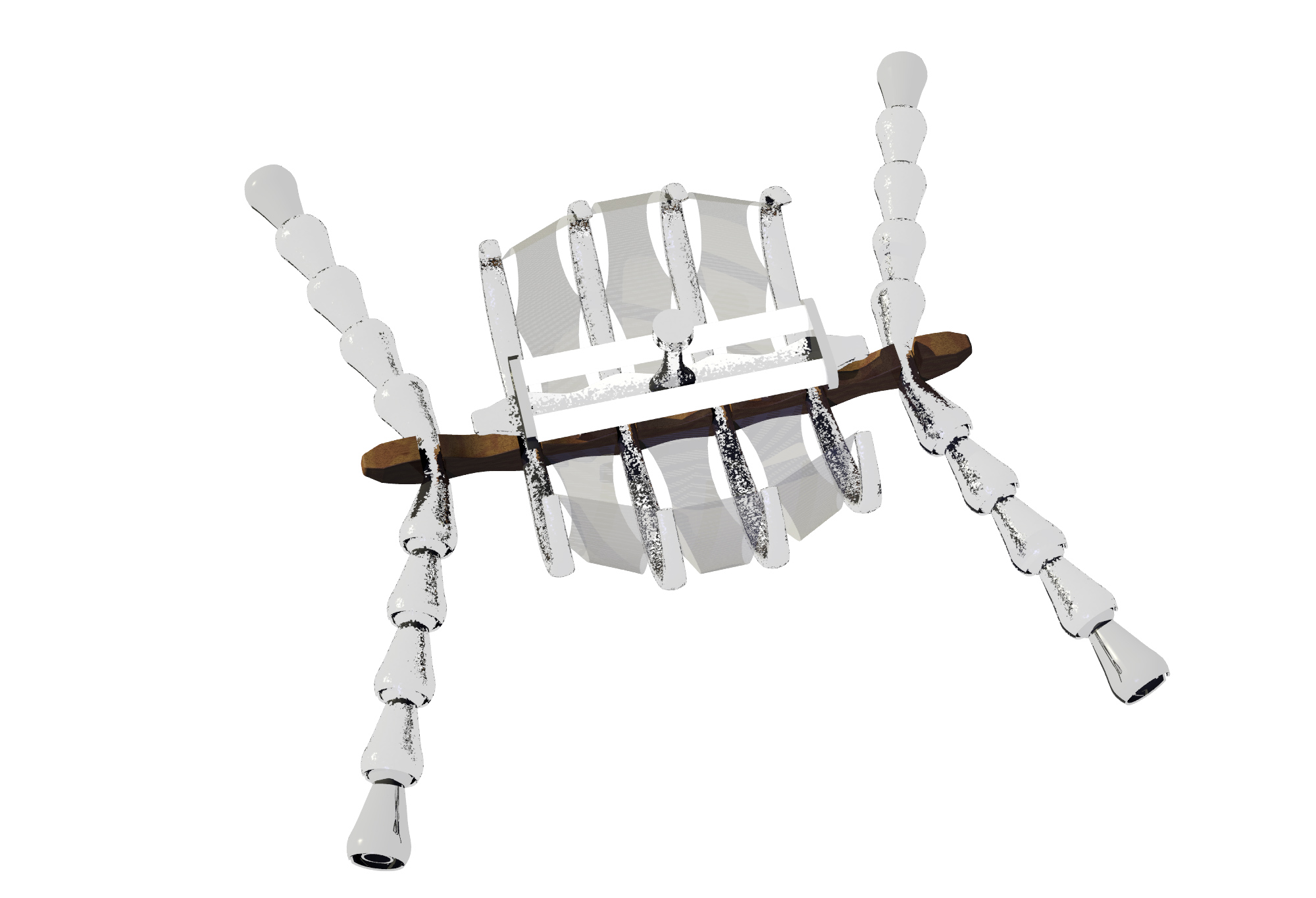 Finally, for the next iteration I abandoned the original tentacular arms in favor of a paddle-like shape with a ball-like end, like the head of a femur, that could be rotated within a socket clamp, itself a sort of metaphor for the cup-like acetabulum of a pelvis. 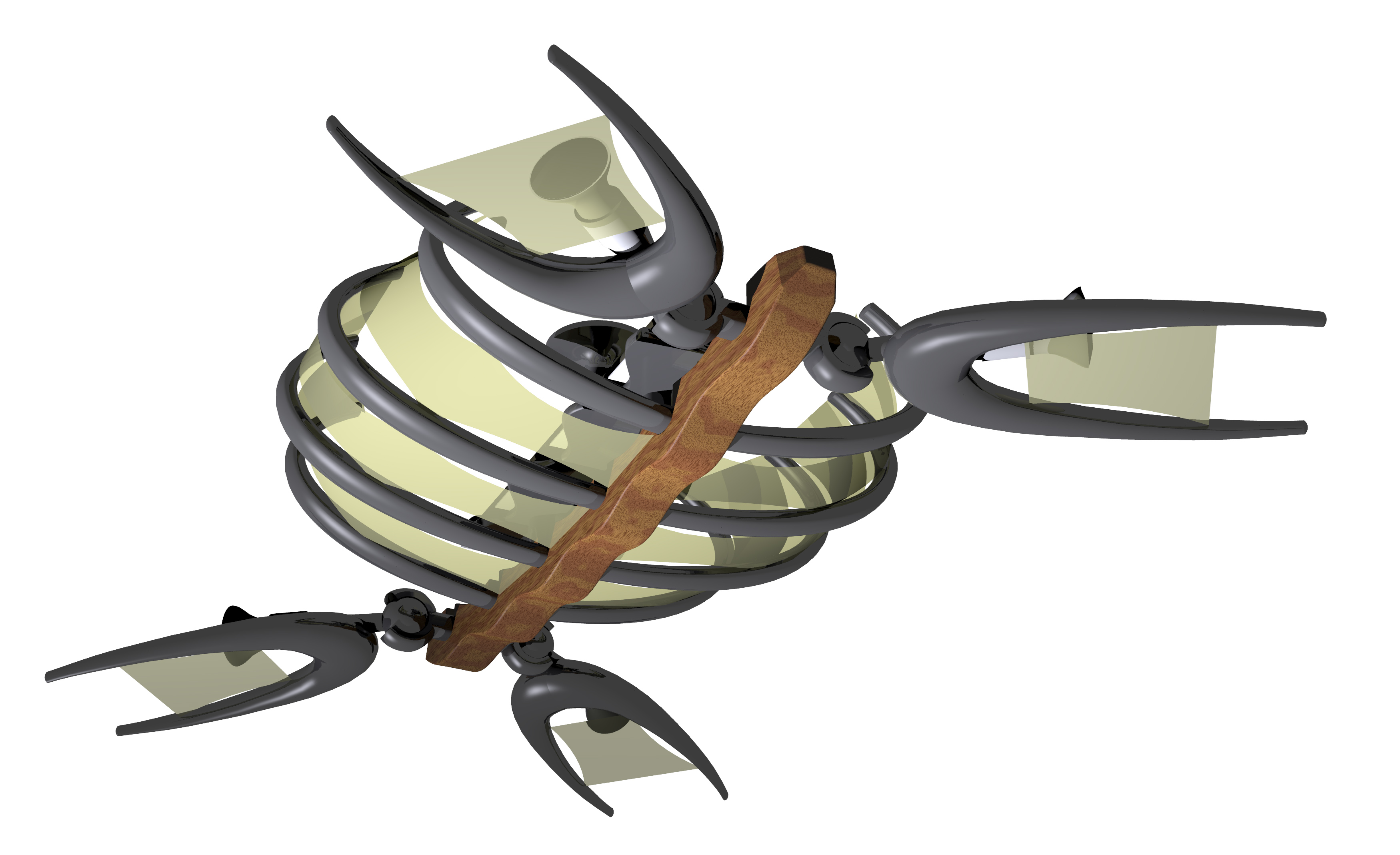 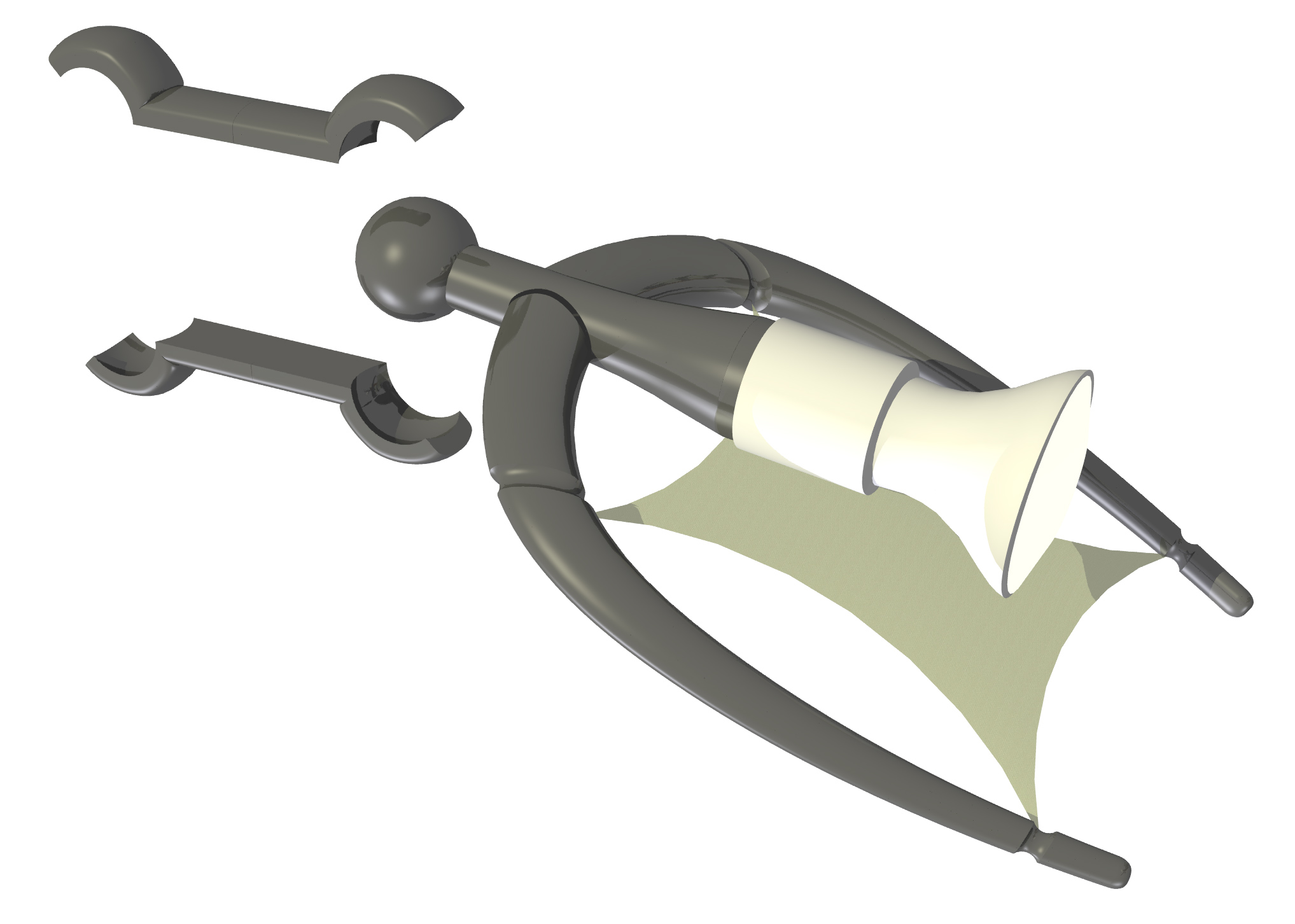 With a certain number of trivial variations, this general configuration for the piece would hold through the creation of the patterns and the casting. And, unavoidably, it would from this point be characterized (by classmates) as “the dead turtle light-fixture.”

I decided to leverage may familiarity with the school’s ABS plastic printer (I worked as a monitor in the primitive “fabrication lab”) to create the positive forms for the pattern directly from the computer model. The little holes in the plastic prints were placed so that I could run dowels through the pattern board to insure that the two 3D-printed halves of each component were correctly aligned. 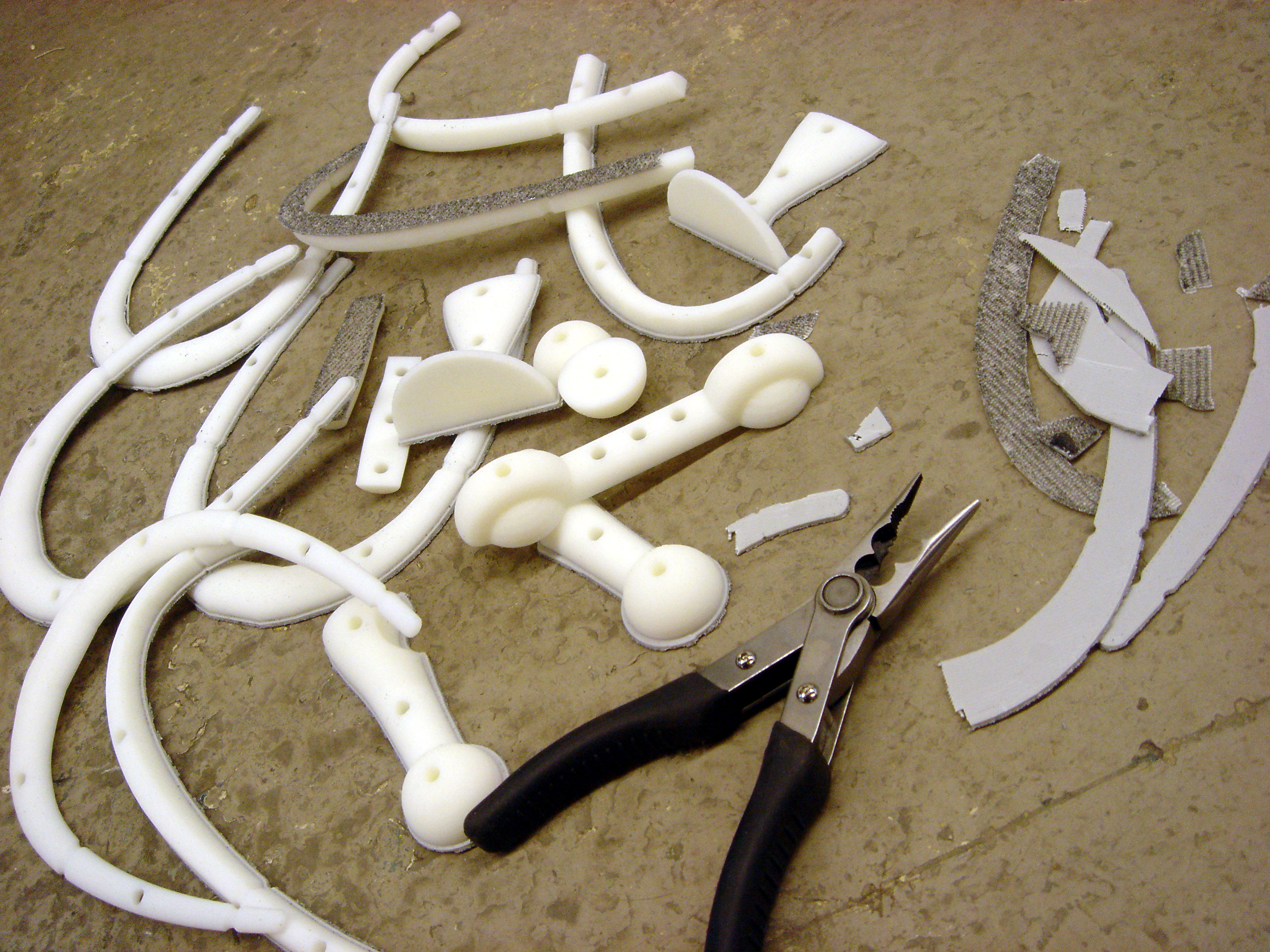 My two patterns were duly assembled, lacquered, and delivered to the foundry, over the usual frantic month of sleepless architecture school nights. 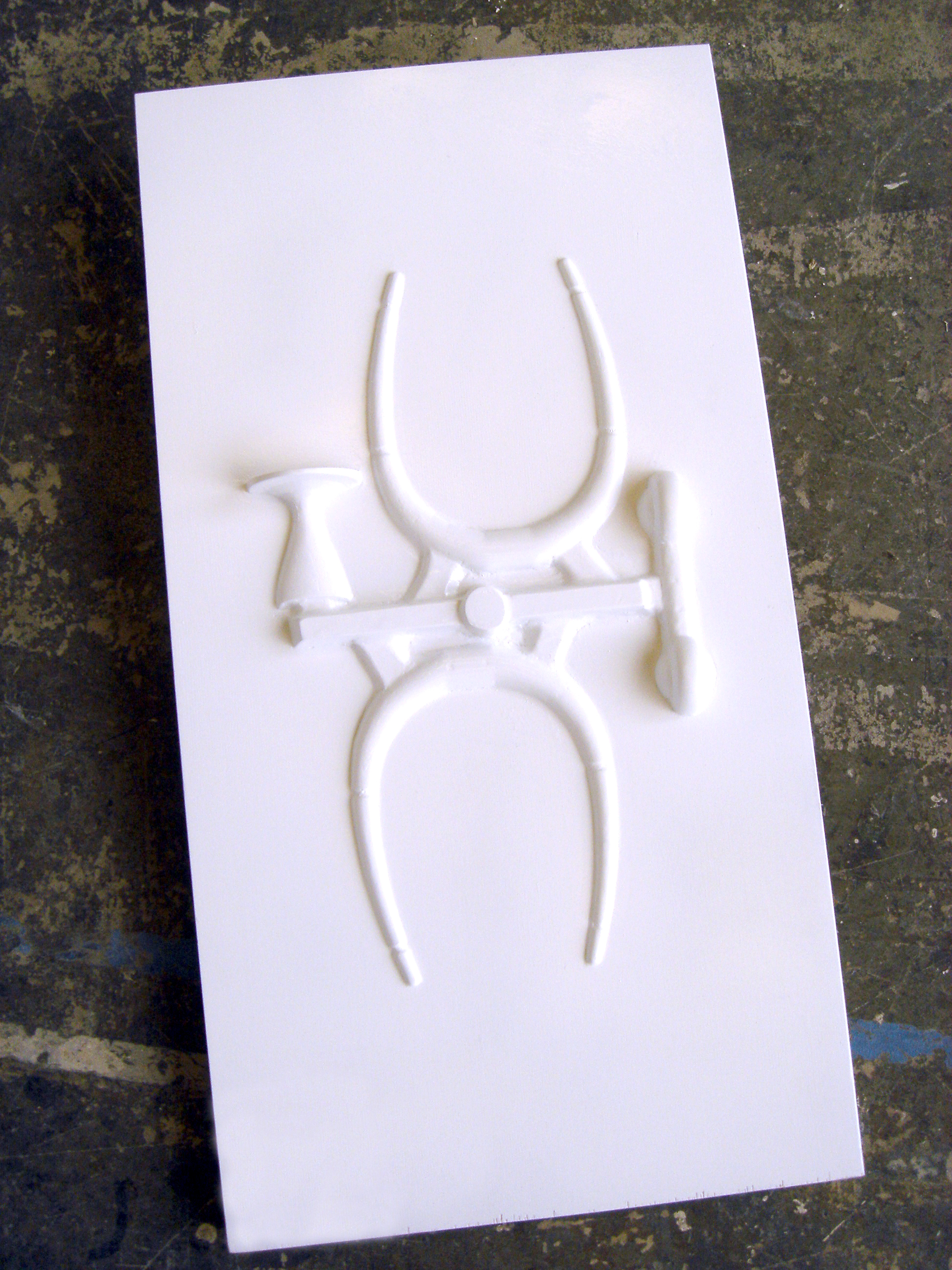 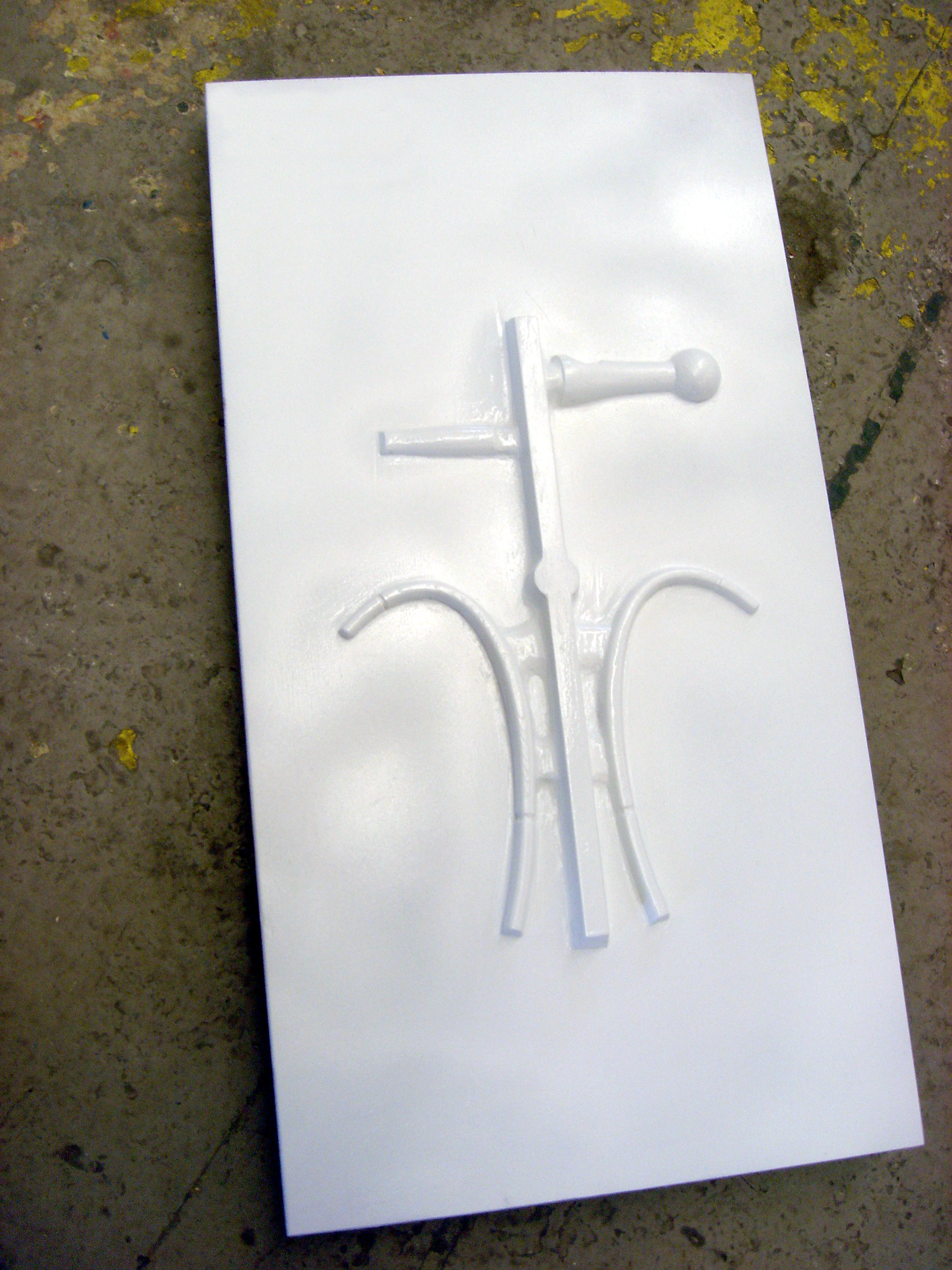 Two weeks later I picked up my rough aluminum castings: 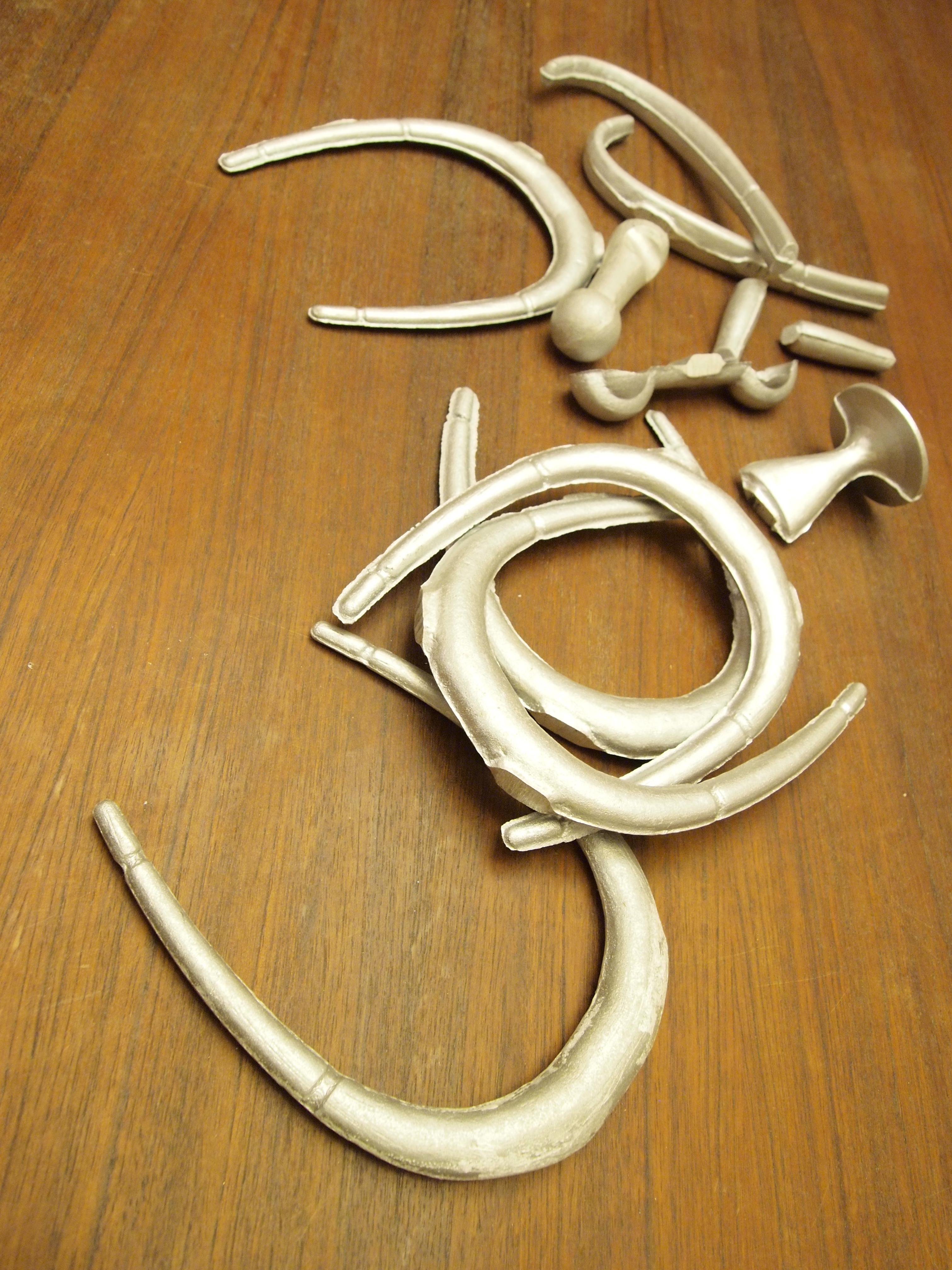 It is worth noting here that despite the ridiculously exacting dimensionality of the computer models that generated the components of the pattern, a massive dose of imprecision had filtered into the work by the time I had my metal chunks in hand for assembly. First, the smooth compound-curving surfaces of the NURBS-based model (created in Rhino) were of necessity approximated as faceted polygonal meshes when converted to the stereo-lithography file format required by the ABS printer. Of course, the diameter and other limitations of the hot plastic thread spooled out by that machine’s print head resulted in plastic objects that themselves only approximated those meshes.

Furthermore, after the plastic elements were mounted and registered through the pattern board, it was necessary to fillet the joint between the plastic and the board by hand (my unpracticed and inevitably sloppy hand, I am afraid) with auto-body filler, to prevent sand from adhering to those areas and ruining the mold when the pattern was separated from the cope or drag.

Given the very basic nature of the casting I had commissioned, during solidification a certain amount of contraction or even minor deformation also occurred in the cast metal.

And finally, it was necessary to remove the gating system, along with various burs and accidental “spreads” of metal, with the appropriate but grossly-inaccurate shearing and grinding tools.

What does this mean? …that at best, my “finished” metal bits of simulated skeleton were only rough and barely-ready approximations of my original digital dream. Actually, even the wood “spine” that I cut in the school’s waterjet took a slight warp, despite my best efforts to minimize the contact of the stock with the cutting fluid.  Every last component required near endless milling, drilling, and filling before it fit together as I originally planned. Let’s just admit, up front, that not every instance of “organicism” in this piece was deliberate. 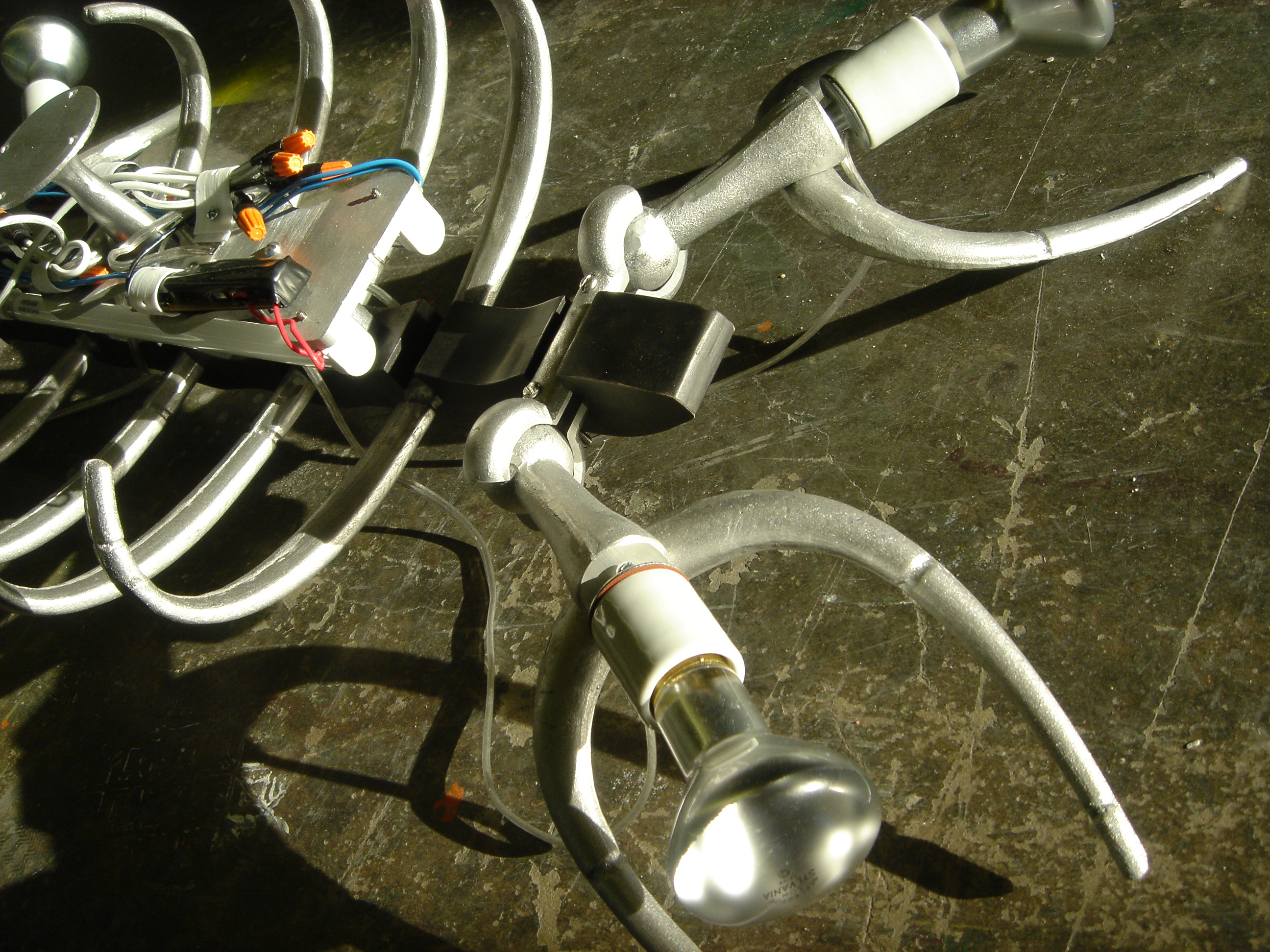 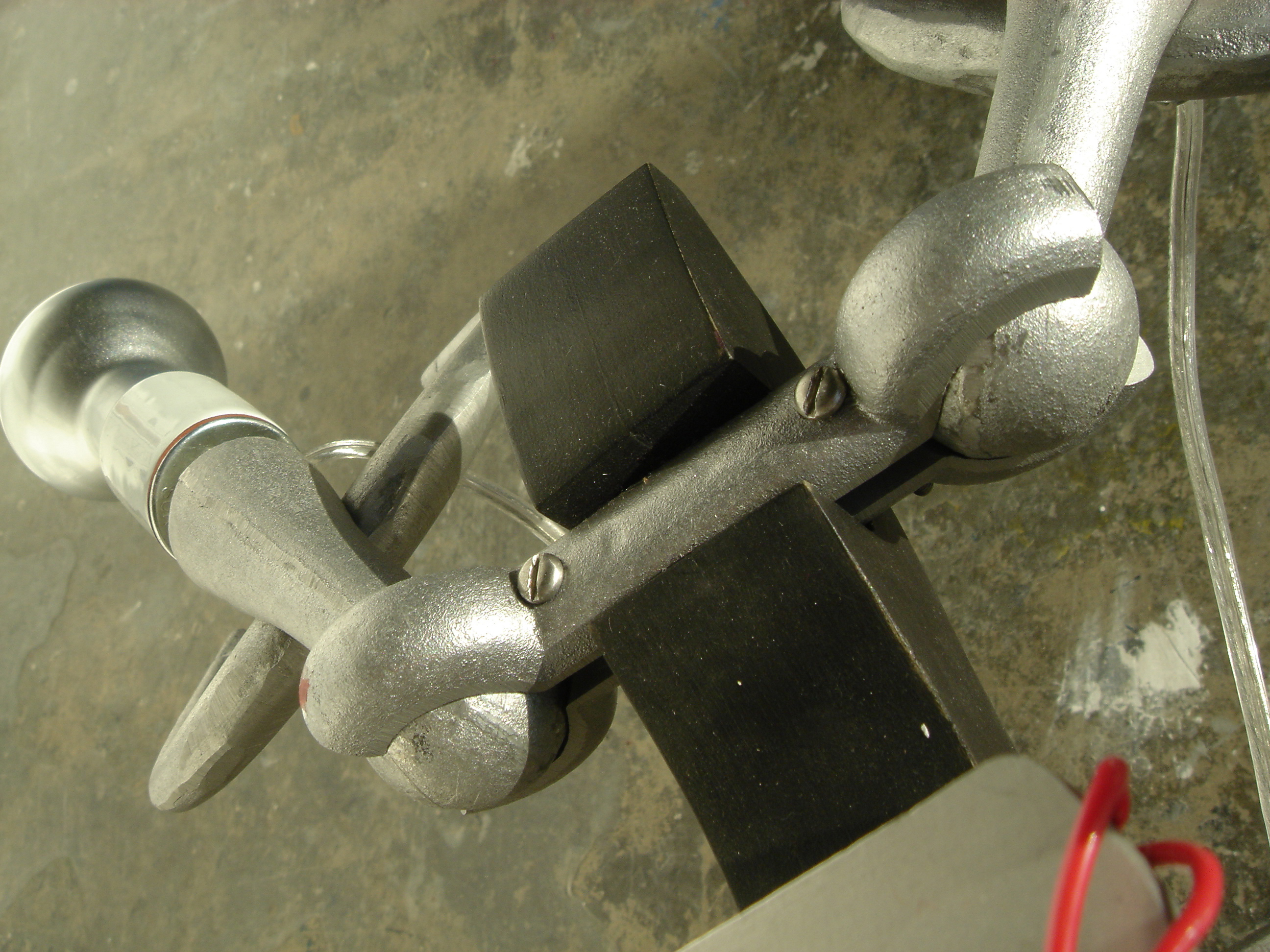 Is this sort of inevitably-haphazard manufacture really “the future” as the advocates of mass-customization (or whatever they wish to call the process now) would have us believe? Is this how everyday artifacts are designed and made, or are soon to be made?

But whether an example of rapid prototyping or handicraft from hell, I nevertheless had a presumably-reproducible example of my necrotic lighting design largely assembled and wired to inefficiently convert electricity into light in time for the hazing ritual that terminates every instructional course at architecture school: the juried critique. …which, in this case, is best left largely to the imagination of the reader. Consider this: one juror, a celebrated, elder designer and theorist of ornament, stormed from the room in what I think was horrified huff, after I responded to his criticism of the exposed wiring as “inorganic” by pointing out that he hadn’t grown up on a working ranch, as I did. If he had — I elaborated — then he would have seen farm animals flayed and butchered and he would understand that living things, once their hides have been removed, are simply full of bits that look vaguely like cords, and tubes…and wires. In fact, I made up that grotesque riposte on the spot…although I know that I was present, several times during my youth, when large helpless animals were violently converted to foodstuff, I find I have no visual memory of the details of those events.

Post graduation, in a fit of dissatisfaction with everything I had done, I took apart my dead-turtle light fixture and stashed the pieces in my basement coal cellar, which was always

…crammed with things that peered out of the darkness off the edges of shelves, frightening the wits out of the wizard as he poked around looking for jars of mandrake root or dwarf hair in aspic…

(That’s a quote from John Bellair’s 1969 novel, The Face in the Frost, which has proved infinitely more entertaining and useful to me over the years than any number of treatises on architecture and design. I suspect I take most of my interior design cues from the late Mr. Bellair’s description of his protagonist Prospero’s house.) 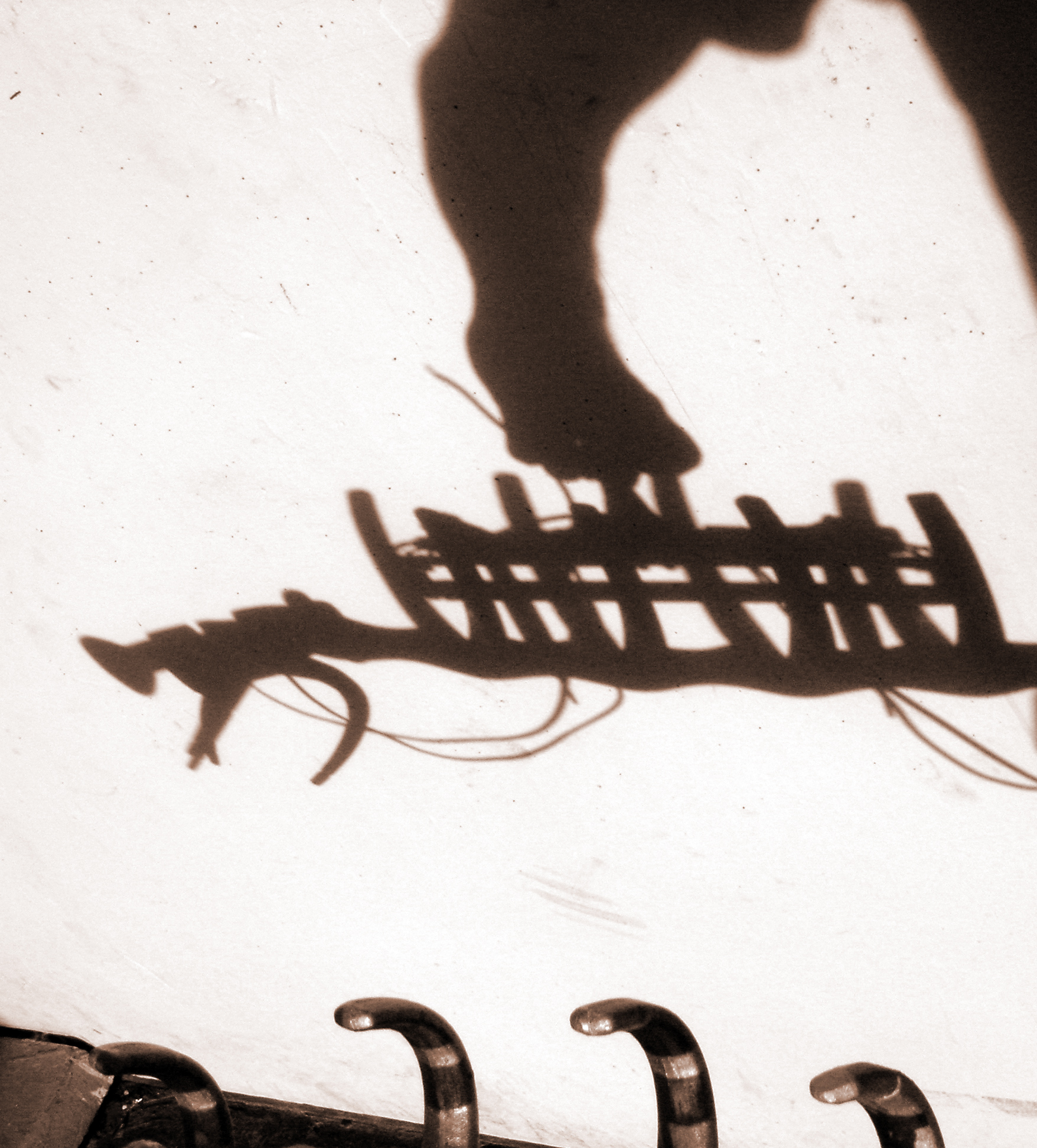