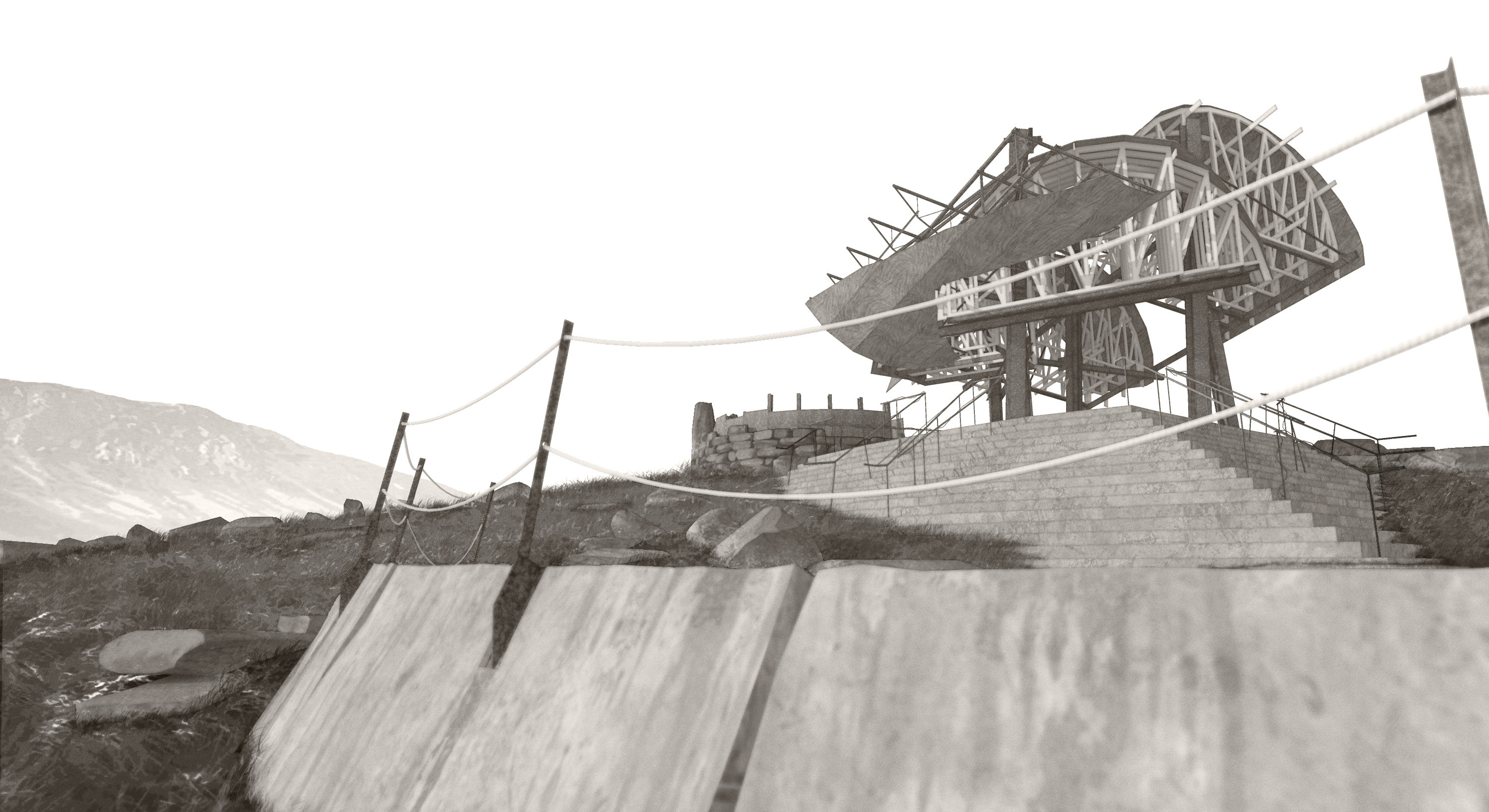 This project was a response to a call-for-entries for the first “theme issue” — “fantasy architecture” — of AIArchitect, the newsletter of the American Institute of Architects. Renderings and the narrative for the project were published in the July 27, 2007 issue.

An upright stone in a puddle of rainwater…or two, or five stones…a few fragments of a curving wall, a capstone precariously balanced across the uprights, defying time and gravity, a banked platform, perhaps even a path (to where?) marked out by yet another set of stones.

Is this a work of architecture? Was it a work of architecture, two, three, or nearly five thousand years ago? It’s a pile of rocks, but it had a meaning to the nameless figures who dragged the rude megaliths up from the valley, excavated the ditch with spades of deer antlers, who marked the path, who left their stone axes and the bones of their leaders or their scapegoats tucked in odd corners. We can survey the remaining stones; we can look for alignments with the stars or mountain peaks that might or might not have been sacred; we can carbon test the splinters of wood left in a post hole long filled. We can never really know what was intended here, what they meant in doing this. Yet the significance is there, in the leaning stones, the path, the post holes…we can feel it. It’s still there, but we can no more define it than we can speak the language of the builders or understand their vanished world.

I do not like the term “spirit of place,” which seems overused now…but if there is such a thing, a ghost of intent with an objective presence independent of its forgotten, long-demised creators and their whole swept-away milieu, it lingers in such fragments and such places.

It is difficult at this point to imagine that I will ever in my foreshortened career undertake a project with more than a transitory financial significance to its owner, let along an ineffable meaning that will outlast me and my whole civilization. But I can imagine how I might approach such a thing…how I could evoke this ghost of intention, with the means and materials I believe I understand as a man of my own time.

So let me start with the same elemental fragments and gestures: a path, marked irregularly, almost unmarked, by found megaliths, across the flat top of the hill…for the initiate, or for those to be initiated?…a gateway and threshold, also elemental…the gate is into the Other Space, a foyer to a sacral world, perhaps (but it doesn’t really matter which sacral world, does it?). The space of transition beyond the gate is a circle…and because I am modern, I have the stones kept from falling into the space with heavy oxidizing steel plates and wide-flange steel columns embedded into the concrete platform. There is yet another “elemental” guardian, a single low, tooth-like stone on axis with the first threshold, in a small reflecting pool like that which would form around it on a sodden moor (even though here it is a pool in a concrete platform)…and beyond, on a different platform, on a different axis (or none at all, to mark the change in the Path), another pool, under the oculus of a precarious-seeming (but actually rather overbuilt) structure of plywood sheathing, monoplanar trusses, and steel sections…a pool reflecting just the misty sky…Beyond the pool are stairs down to the edge of the world, or perhaps just a view into it. 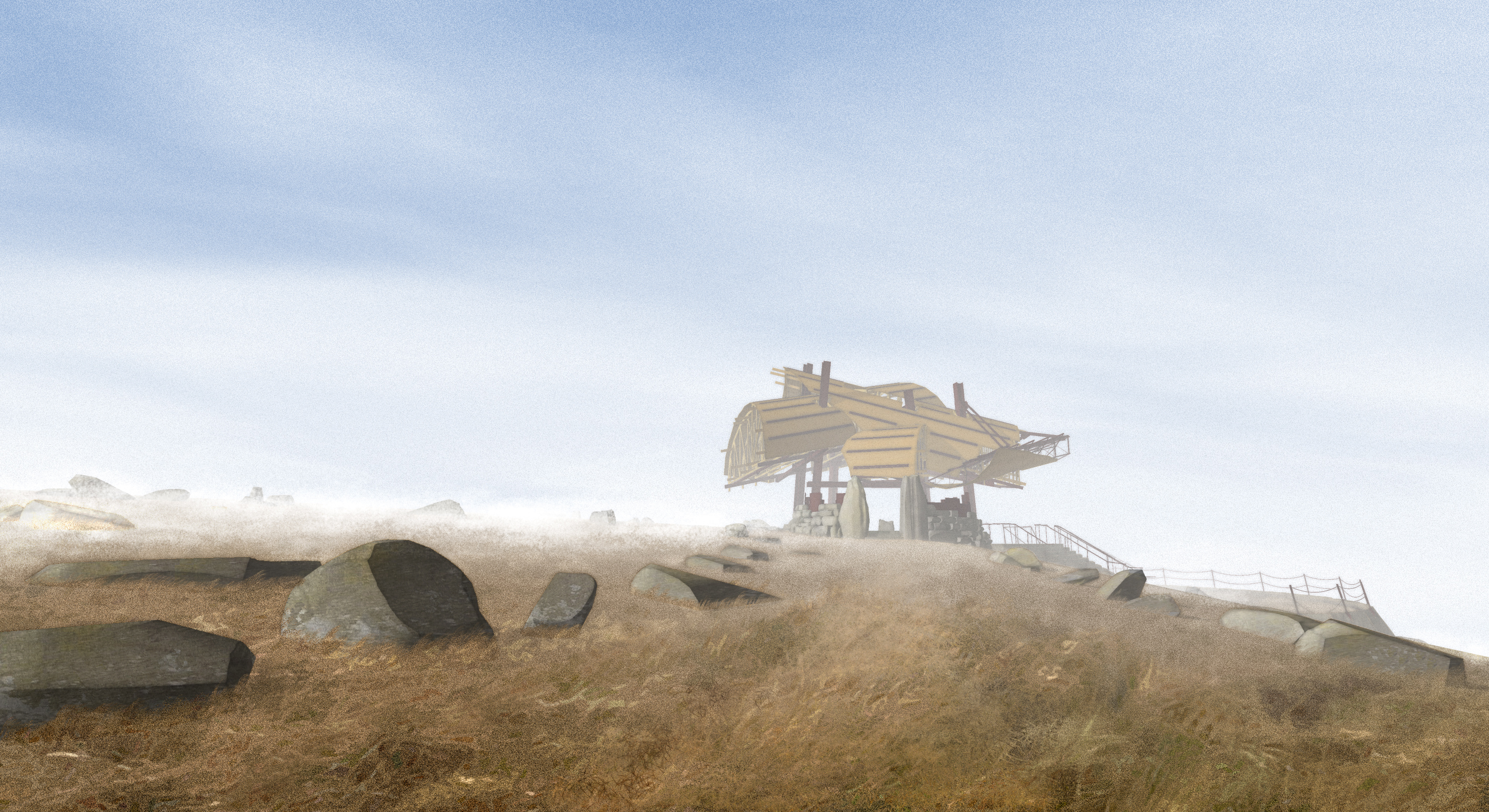 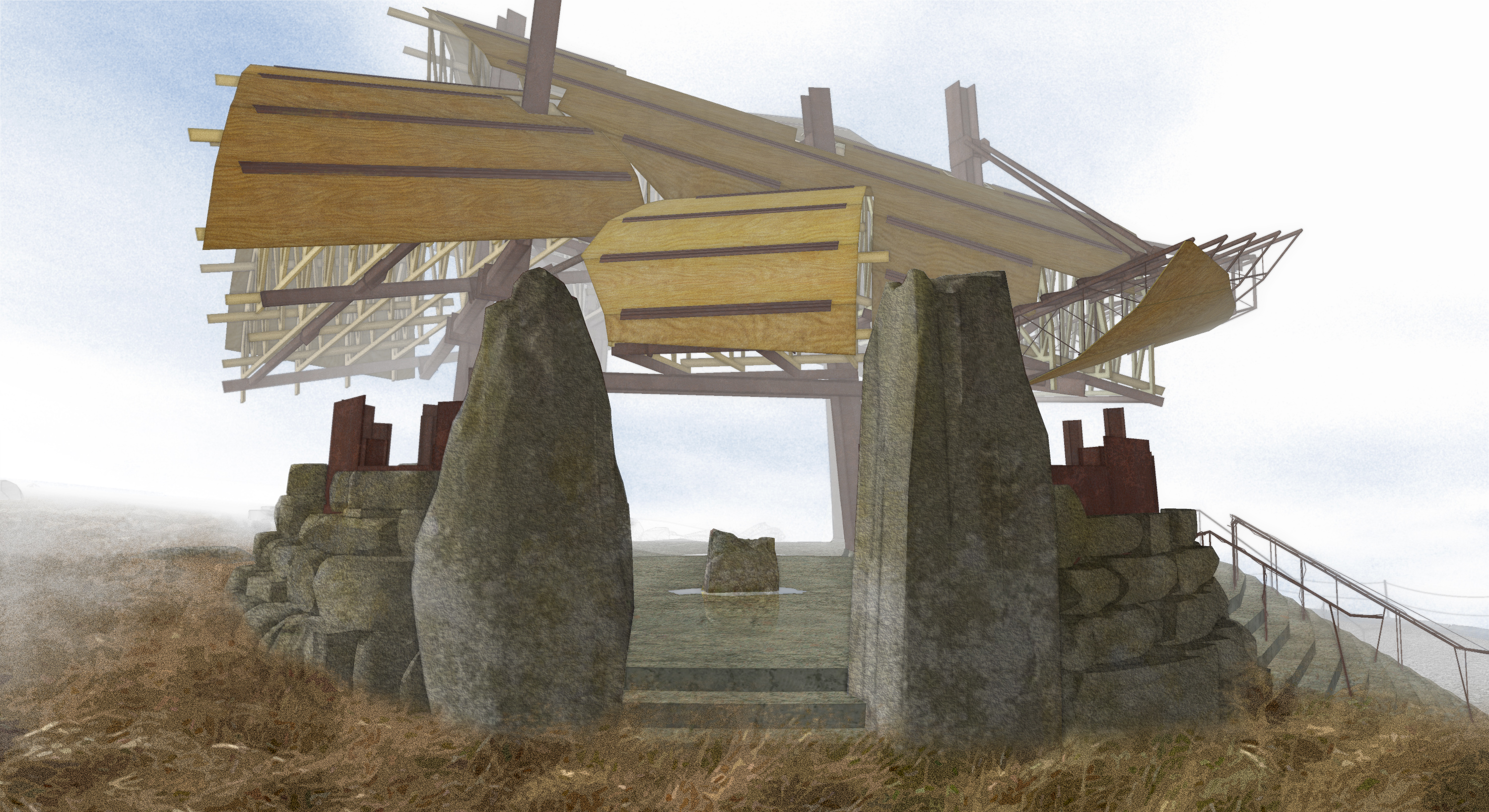 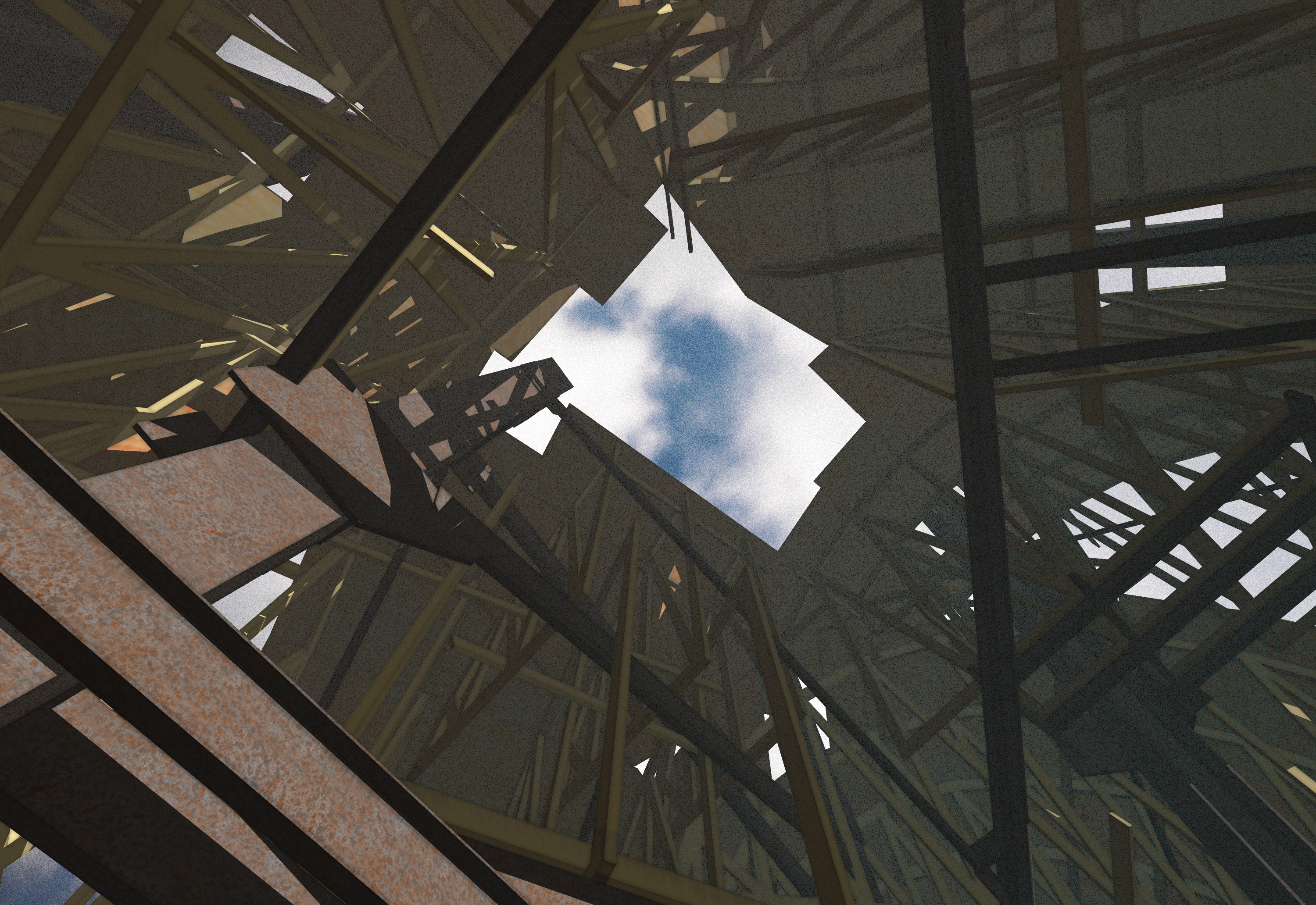 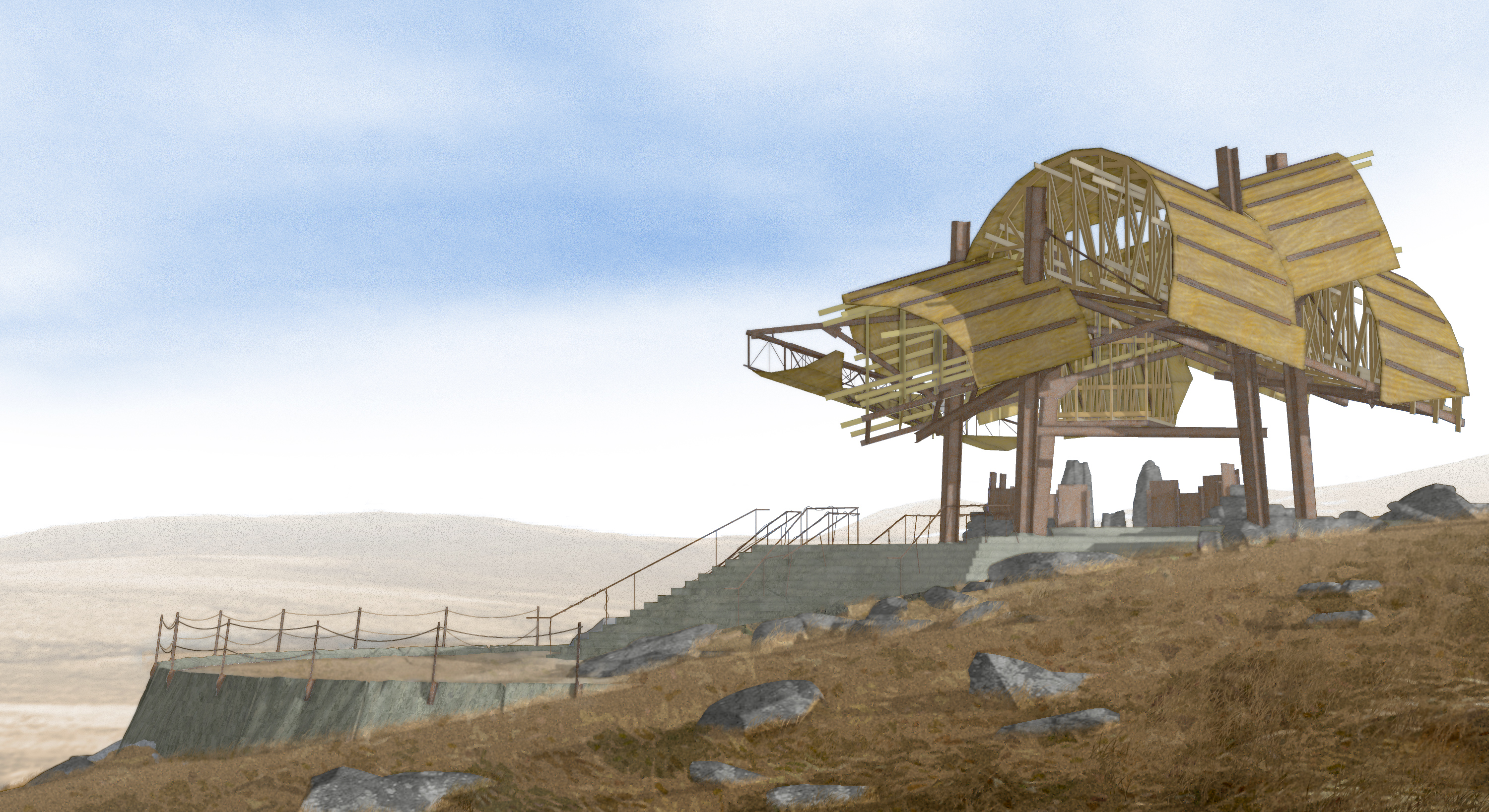 Eventually of course the trusses will weaken, the sheathing blow down the hill in a storm, the steel melt away in red and orange stains, the concrete complete its karmic return as sand and gravel. What will be left? A few upright stones, a few fragments of a curving wall, a path…and the ghost of intent.

The editors of the newsletter placed my project in the category “Out There”:

Out There houses three projects in space: one in the ocean, one in our space, and one for anywhere and everywhere.

And they specifically prefaced it with this note:

Besides its intriguing design, we were struck by the poetry of the narrative for this entry. We have decided to let the narrative stand on its own, rather than interview its author and rewrite his tale in our words.