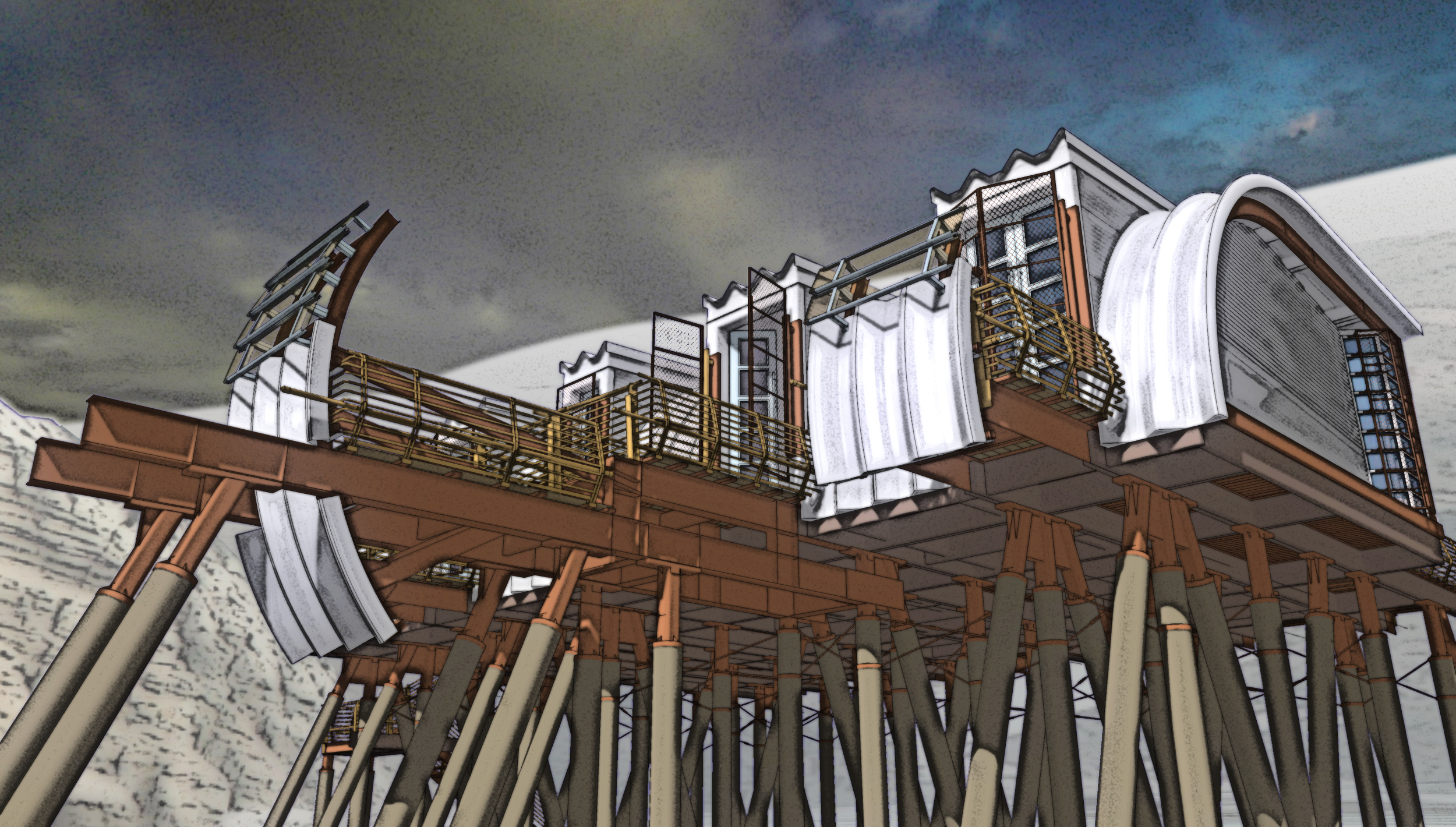 This project, consisting of renderings and a metatextual narrative, was conceived as a response to a call-for-entries for the second “fantasy architecture” issue of AIArchitect, the newsletter of the American Institute of Architects, for August 22, 2008. 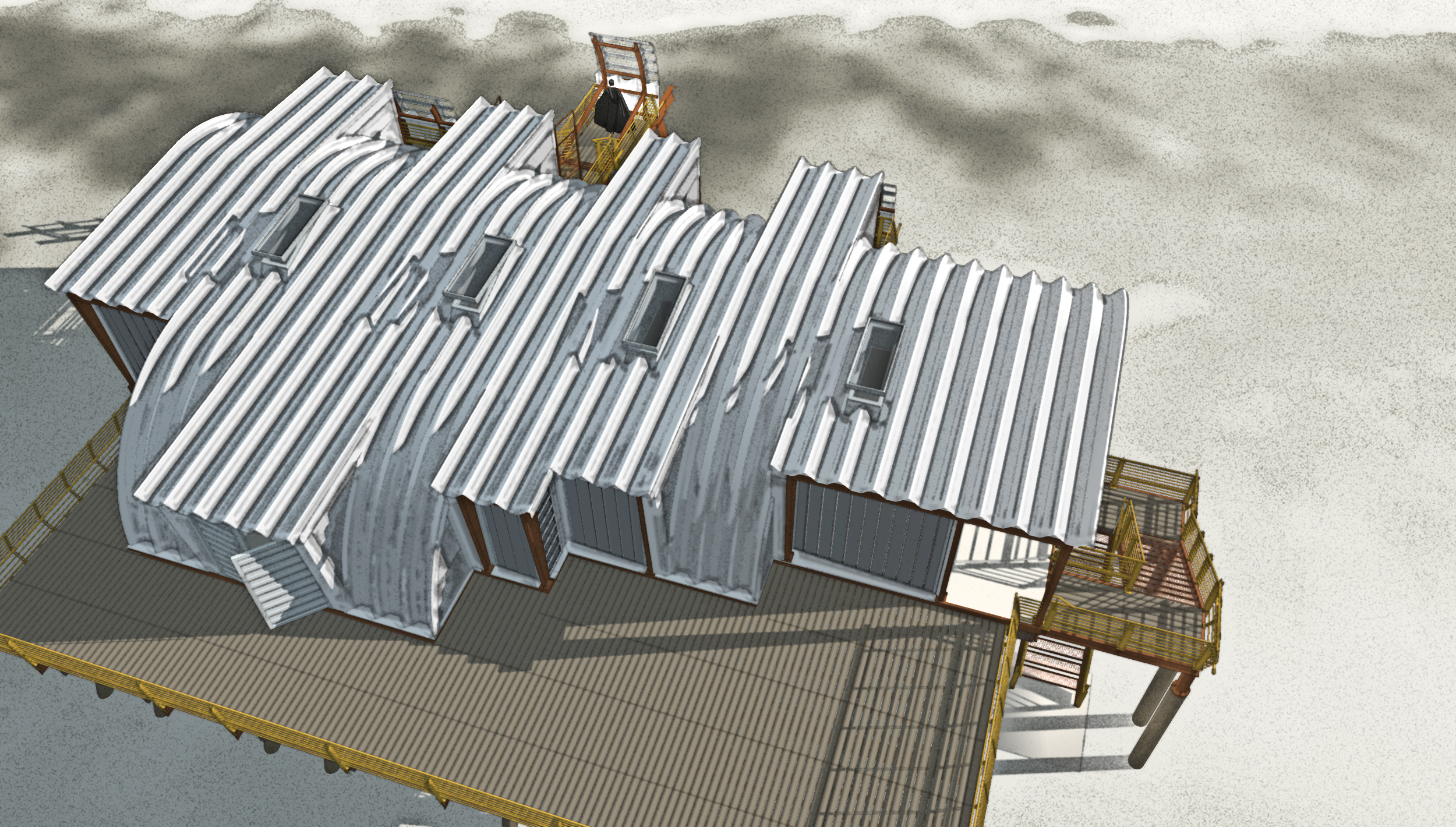 Must it always go that way, petty commonplaces driving each project from assigned purpose to imperfect-if-not-botched realization? As if any of those considerations matter ultimately, at the final trumpet-blast, in the end!

That phrase “in the end itself” can conjure–in fact has conjured up a potential mythology, something with which I might defy the quotidian: this is the house where I wait for the world to come to an end. 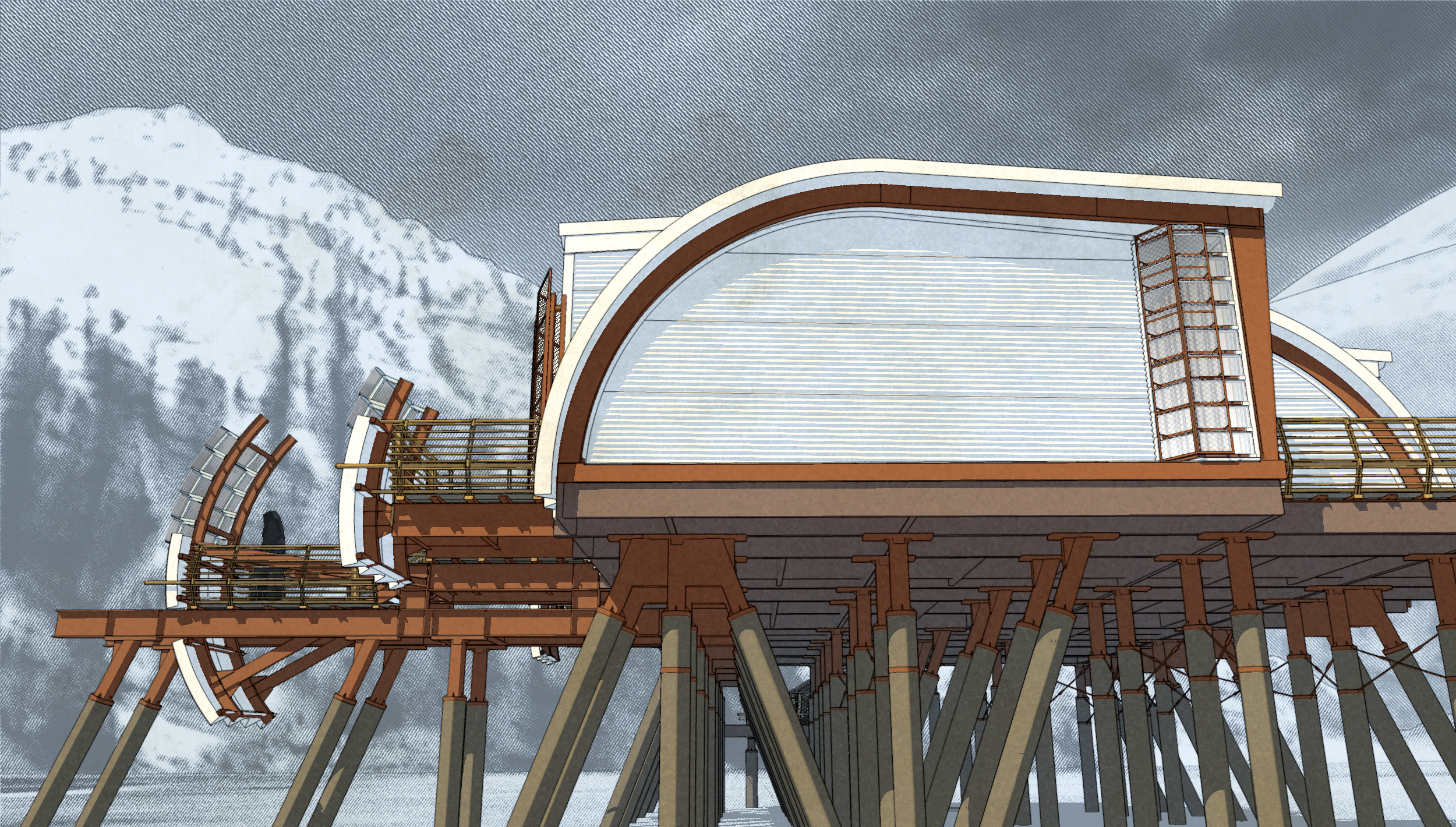 Having latched on to this Mythology as the basis for a work of architecture, in defiance of the usual conventions and rituals I must next determine a site. Where does one go to await such an occasion? Not for me the conventional-conventions for “going out with a bang”, now that I have a Mythology: no typically-grand (or even typically-snug) house in a great city; no typically-soaring cathedral for my typical-prayers; no typically-beautiful spot in a beautiful country; not even a typically-favorite little resort with a typically-special friend for company. I strive to think of some place hard to reach–for I’m not coming back–with little to call me there other than it will be one of the last places to succumb to whatever thing or things (as if it matters) will consume the world. I think of desperate literary journeys and undertakings. I remember Poe’s Pym and his unfinished narrative of an unfinished voyage to the antipodes: South. All the way. Until things start to stop.

The correct site leaps off a map of the Antarctic at me: Deception Island. I like the name. The whole of existence is generally recognized as a deception; so let me witness it being swept away from the vantage of an island named in honor of the great untruth. And the map I have is from 1829, so my site is a deception now too (a volcanic island in a disputed sea is unlikely to remain geographically quiescent for decades, let alone a century and a half). My Deception Island is metaphysical: no oil spills, no noisy tourists looking for penguins and icebergs, no “research” stations waiting for the next eruption or a pointless change of sovereignty. My Deception Island waits alone, stark and unvisited in a southern sea, for the end of all deceptions. So: a dark coast, green-less and forbidding, a bleak shore of rock and sand, backed by “ice cliffs” (from the 1829 map), north of a forbidding headland like a giant boulder. This is where (metaphysically, mythologically) I will make the last voyeuristic stand against oblivion in the appropriate architectural vessel and prepare to watch something that might be a storm (but could be any fashionable version of apocalypse, personal or universal) sweep in from the sea (my proxy for the courts of chaos).

Ship it down, pound it down, lift it up, sheath it up, insulate it in case I have to wait, put on a black cloak–and stand there waiting for the end to come up like the most picturesque of gales: 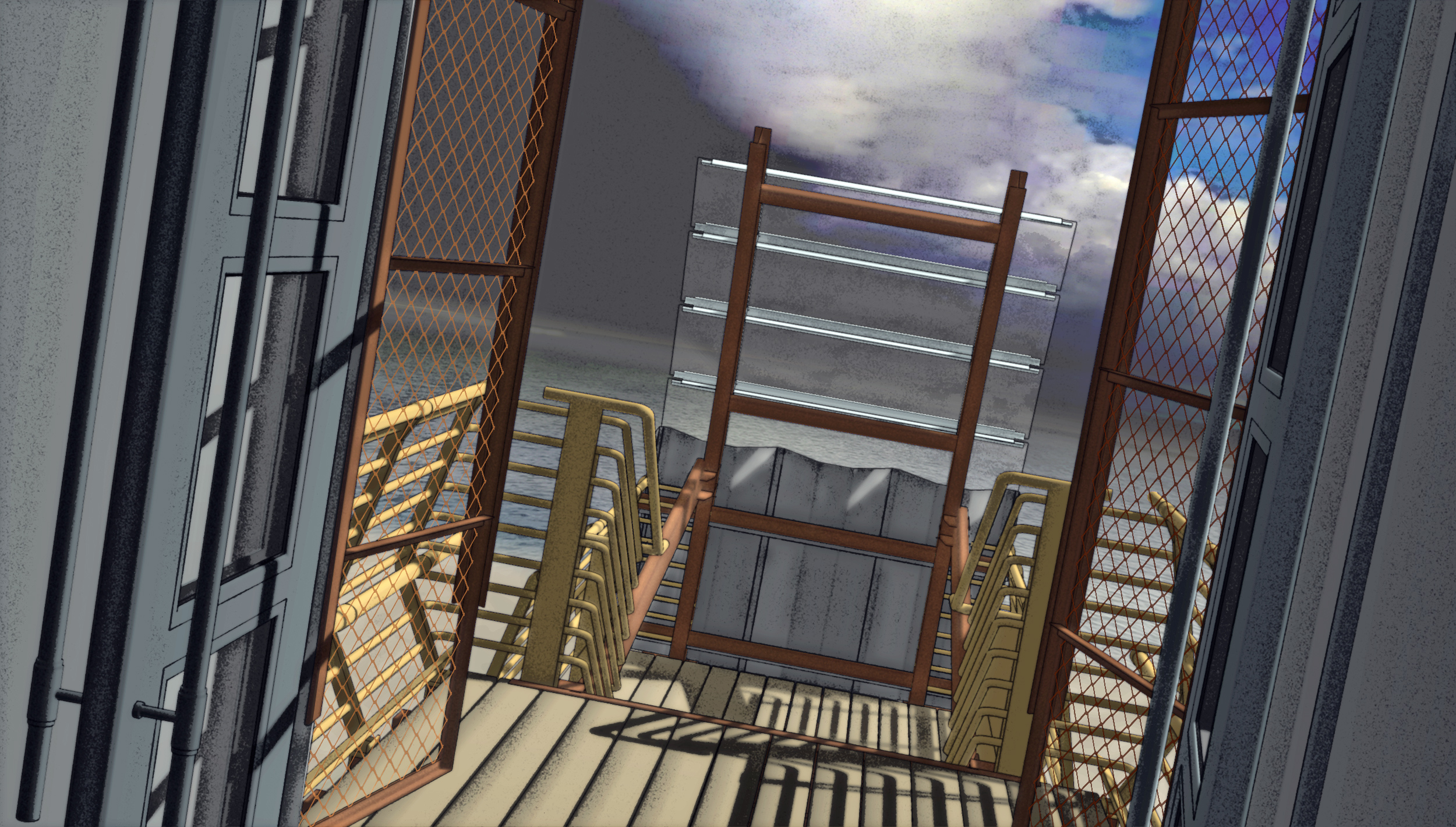 I imagine the place on pilings to last a bit longer as whatever floods in (ignoring, because this is Mythology, the animosity of wind-driven mini-bergs towards relatively-weaker fiberglass-composite poles…there is probably a way around the issue, and anyway perhaps the bergs will have all melted). The curve of the water-front elevation is a bulwark: metaphysically, spiritually hydrodynamic/aerodynamic. Back of the house is a same-elevated deck for the be-tarp-ed supplies (or nothing, depending on how long I must linger).

Since the end will come (in my Mythology) from out the sea or over it, I face the openings that face the sea with a shielding grate in front of heavy (insulated and impact-resistant, to be certain) glass set in stout steel doors. Of course, this is primarily a place to watch something or watch for something, so those shielded window-doors must open onto shielded lookout-balconies which take their brunt-shapes from the curving steel arch of the roof (minimum radius of curvature 10′, according to the manufacturer). Re-purposed acrylic arena-spectator shielding will permit view of that ominous horizon. When the waves get too high, I will back into the hull-house proper, shut the grates (I’ll have to heroically struggle against the wind, no doubt, to get it done), push the doors closed until the gaskets engage, and watch the last act through the glass. I probably wasn’t as careful as I should have been with the flashing details, given the amount of whatever (waves, rain, tears?) dashing against the front, and the salt will eventually eat into the galvalume. But then this doesn’t have to last forever: 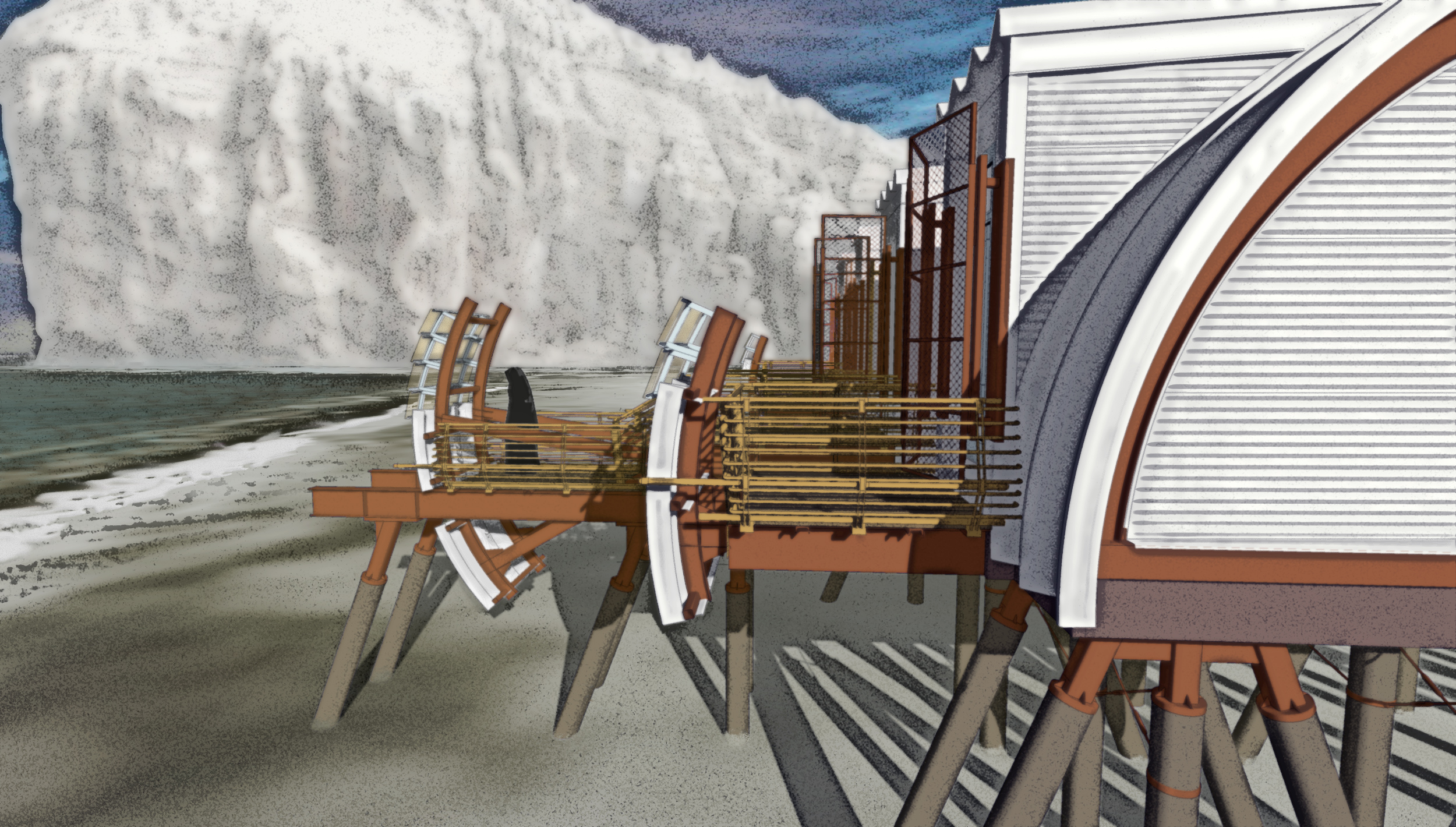 This project was in fact selected for the 2008 fantasy architecture issue, the second time I have had a project so honored (see “The Pavilion for Oblivion”). My Stormhouse headlined the newsletter.  I had no idea that my project was part of the issue until I saw references to it on various websites. 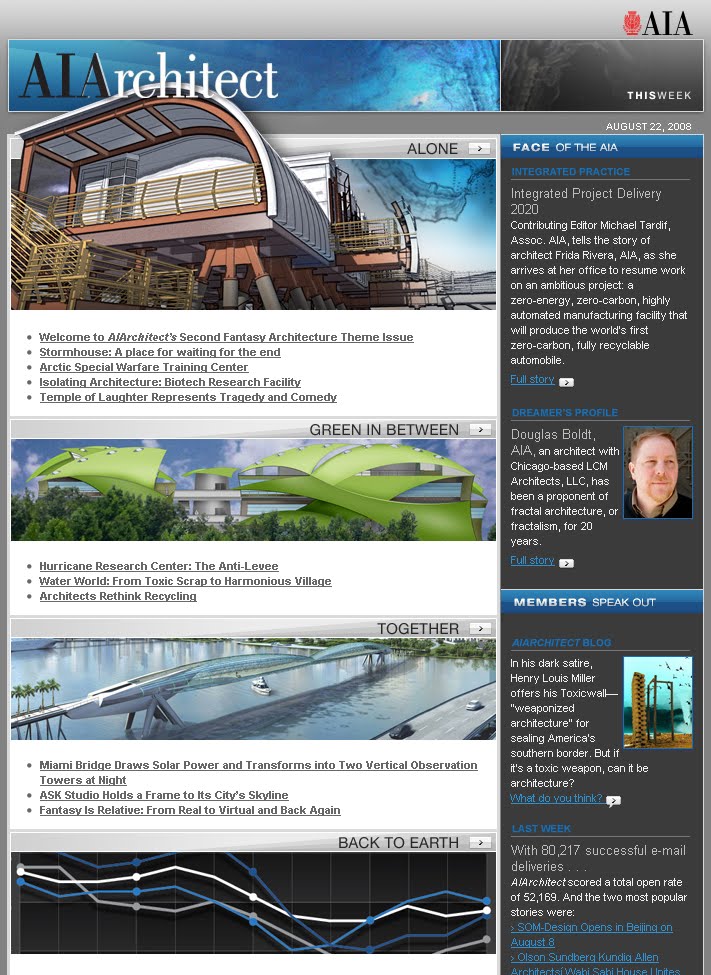 The editors of AIArchitect noted in their introduction to my project,

As was the case last year, we were equally moved by Lewis Wadsworth’s word pictures and his drawings.

I shortly thereafter received a number of congratulatory emails from various architects around the United States.  Three were interesting enough to bear mentioning:

Derek Enders, Assoc. AIA of Seattle, Washington, sent a perceptive critique of my “program” for the Stormhouse:

This is more of a philosophical pondering more than anything. You refer to your Stormhouse as a place to await the end (please correct me if I am wrong) but you seem to have gone to great lengths to design a structure that will protect you from the end, preventing it in a way, which would really mean that it wouldn’t be the end at all, but the beginning of another period of isolation in addition to the one that you had already undergone in awaiting the end. It seems that the Stormhouse is meant to continue to exist after the end, so it would seem more suitable to look at it as a place to await a new beginning, a place to start over after the slate has been wiped clean. Just a thought…

A very good point, I still think.  It has also occurred to me that, in order to accommodate its purported program, the Stormhouse should have been less of a defensible structure, a place where the narrator could be certain of not surviving the imminent apocalypse. 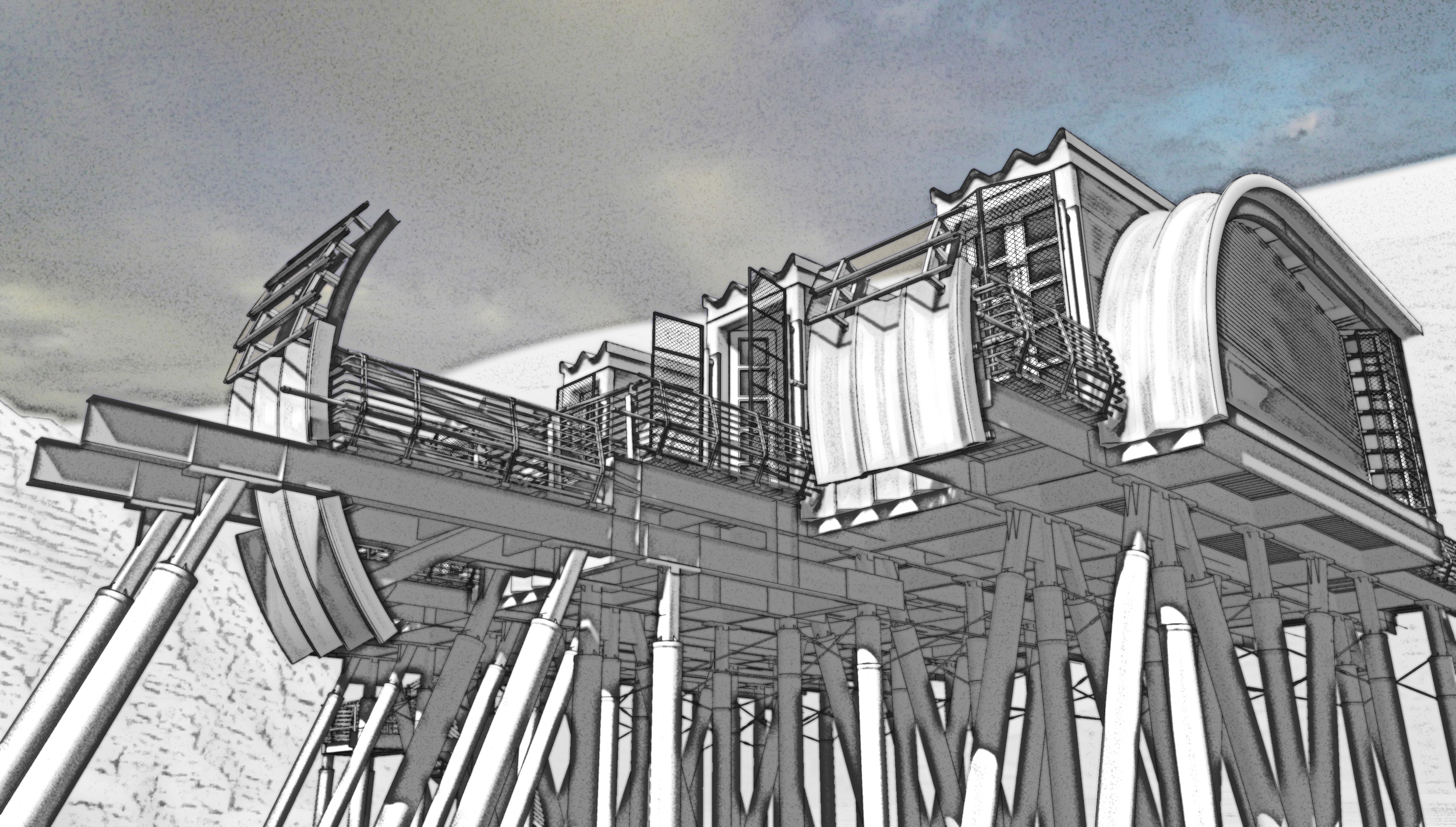 Eric D. Letbetter, AIA, of Atlanta, Georgia very kindly sent me a link to a design competition in the UK.  On closer inspection of the rules, it became apparent  I was not qualified to enter it, as I am not officially licensed to practice architecture in the UK, or the United States, or anywhere else for that matter. The idea, however, was to come up with a prototype for a single-family house in areas prone to violent flooding.  In other words, an unconflicted Stormhouse – stripped of the fictional/metaphysical situation and unlikely setting, one that would and could survive a Storm.

Imagery worthy of “Myst” and “Riven”, with a lot more thoughtfulness.

The question arises as to whether or not I missed my calling in becoming (or trying to become) an architect instead of a concept designer for such “fantasy” games. 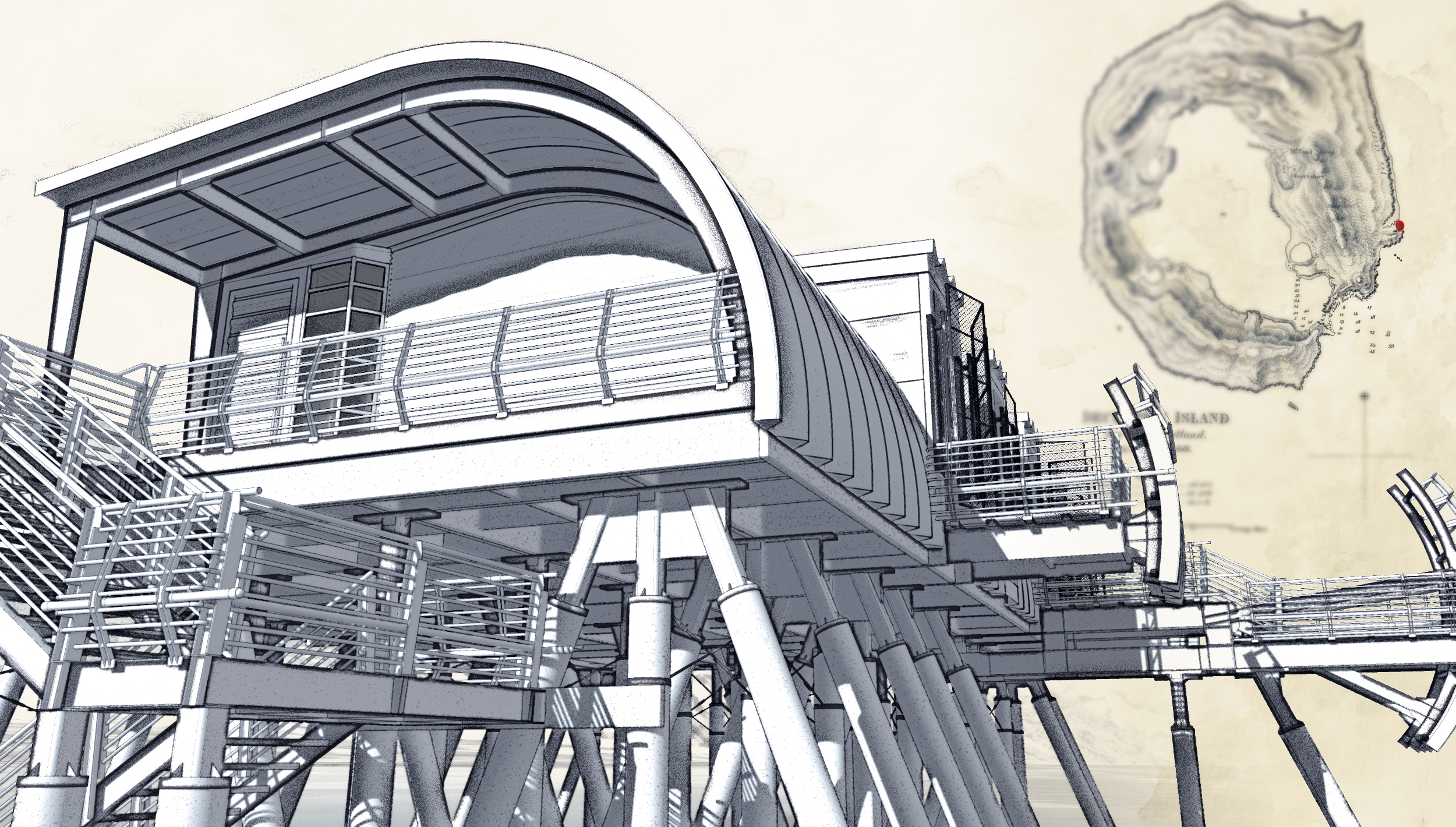